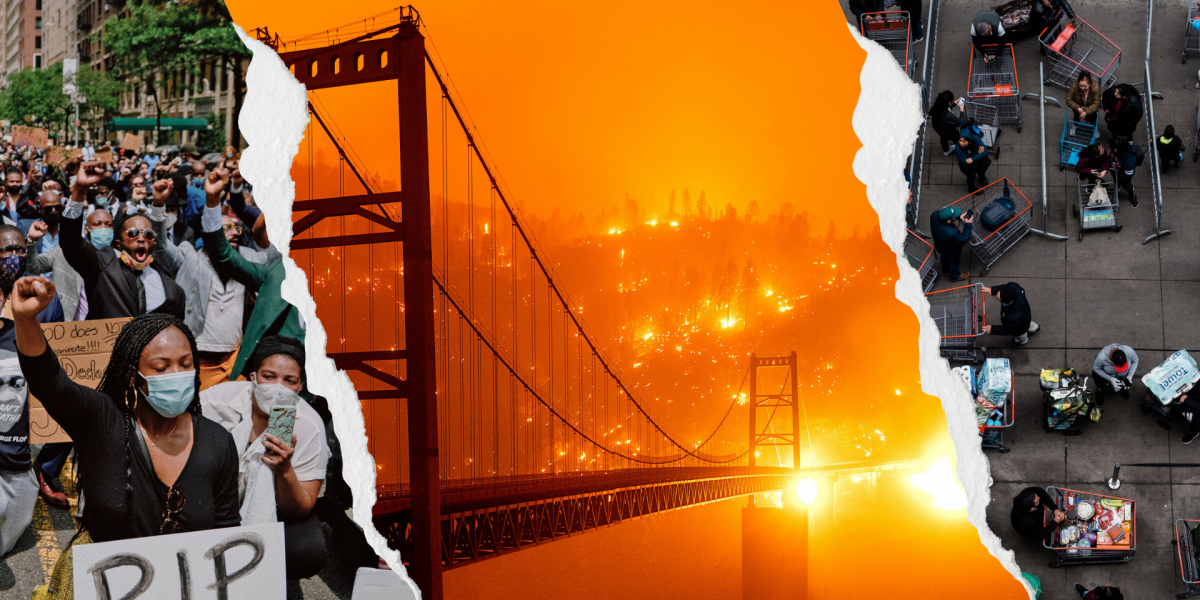 2020 was a year of crisis—environmental, economic, and viral. But it was also a year of resistance—against racism, austerity, and injustice. Below is a brief look at some of the struggles of 2020, through the articles of Spring Magazine.

This year again showed that the global climate crisis is not some future prospect but is happening here and now—with record fires from California to Australia. But the year also saw solidarity with Indigenous nations leading the climate justice movement from coast to coast—from shutting down Canada in support of Wet’suwet’en land defenders, to supporting 1492 Landback lane, defending Mi’kmaq fishers right to moderate livelihood.

The racist murder of George Floyd reignited the Black Lives Matter movement, and the demand of #JusticeforRegis made it clear that anti-Black and anti-Indigenous racism is the same on both sides of the colonial US/Canada border. There was a deepening of the movement for Black and Indigenous lives—with strikes from NBA players to post-secondary students, and a challenge to monuments to racism and colonialism

The pandemic also raised the urgency of migrant justice: migrant justice workers and their allies documented how their exploitative working and housing conditions sparked COVID-19 outbreaks. A series of days of action popularized the demand of status for all, and built new alliances—like the Healthcare for All National Coalition.

Fighting COVID in the workplace

In response to the pandemic, workers went on strike across the US, which helped win safe transit and enforce lockdowns. Workers in Alberta went on wildcat strike against healthcare cuts, Ontario parents and students organized to demand a #SafeSeptember, and grocery workers in Newfoundland went on strike for pandemic pay.

Paid sick days for all

While “stay at home” became an abstract call from governments in response to the pandemic, “paid sick days for all” became a concrete demand to realize it. A series of national days of action raised the demand of paid sick days for all, which was echoed by the Chief Public Health Officer of Canada, Dr. Teresa Tam.

Palestinians faced ongoing threats—from the incarceration of Palestinian prisoners to weaponizing the label of anti-Semitism against Palestinian solidarity. But there were also rallies against annexation and calls for unity.

It’s no coincidence that COVID-19 has been the worst in the US, Brazil and India—all three countries with reactionary leaders whose policies have fanned the flames of the virus. But all countries have also seen mass movements fighting the super-spreaders: resistance to Bolsonaro in Brazil, mass strikes and farmers protests against Modi in India, and opposition in the streets of the US that translated into the electoral defeat for Trump.