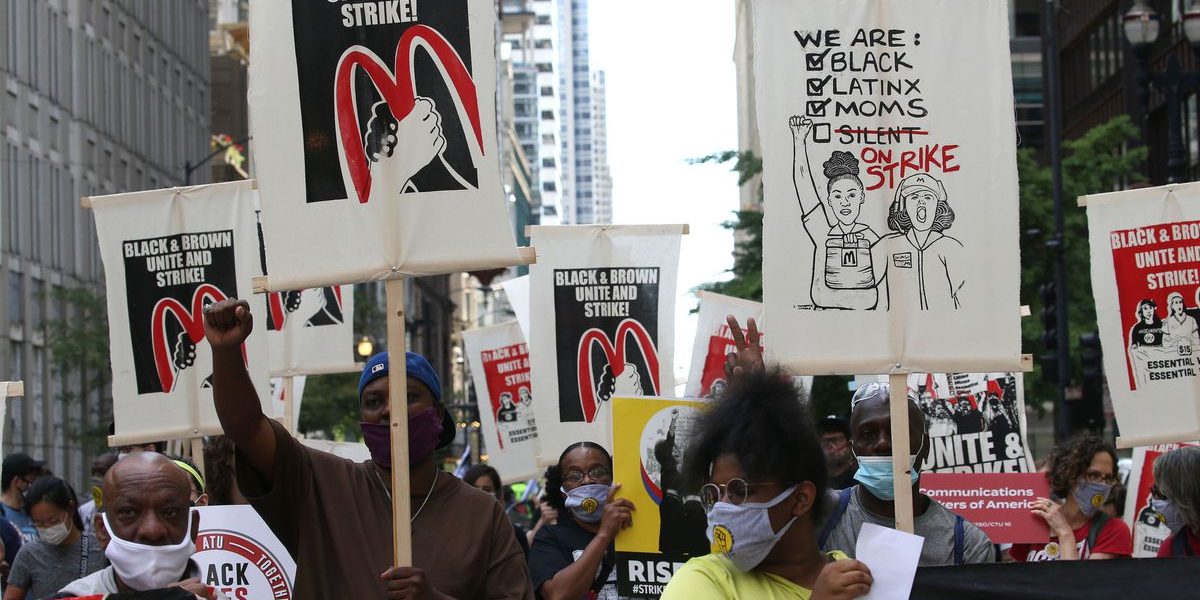 Responding to the first wave of COVID-19 required a safe transit and food supply, a lockdown and ramping up of PPE production, and safe healthcare for all. All of this depended on workers who have faced decades of attacks on their wages and working conditions, disproportionately affecting women and racialized workers. As a result, striking back against COVID-19 has required striking back against the economic order that drives it. As we enter the second wave of the pandemic, workplaces remain a key site of struggle both in terms of health and safety and against exploitation.

Transit workers were some of the first to be affected and to warn against the spread of COVID-19, based on the personal experience of working in a chronically underfunded transit system. Scott Ryan, shop steward for ATU Local 1576 in Washington state, warned in February that “our buses under ‘normal’ circumstances are germ tubes on wheels. Now we introduce a disease that zero people have been vaccinated for and has an incubation date of up to 14 days without showing symptoms…We are high risk ticking time bombs for being exposed to someone with it.” Within a month a number of transit workers had died across the US, including Ryan.

Transit workers were also some of the first front-line workers to take action to protect themselves and the public from the pandemic. From Detroit to Birmingham, transit workers went on strike and won: safety for themselves (access to hand sanitizer and having people boarding the back of the bus), safety for the public (restrictions of passenger numbers to maintain physical distancing), and more accessible transit (suspending fares). As ATU International President John Costa said, “We’ve been leading the charge for strategic service continuation because we know how essential it is…The best way we can honor Brother Ryan is to continue to demand our employers and government provide critical protections that essential frontline workers require to do their jobs safely.”

The first wave required a lockdown that put large sections of the economy on hold, while others relied on work from home. But it also required many to continue working on the front-lines. While food production and distribution are essential to our collective survival, those who grow, stock and serve food are denied essential protections.

“They’re not providing us with the simple necessities to combat the virus that is right in front of us. We feel underappreciated and undervalued, so my co-workers and I decided to take this step to fight back,” said Ana Martinez, a McDonald’s worker. In March the first wave of the pandemic was met with a strike wave of workers across the US: from Purdue poultry processing plants, to Amazon warehouses, to Instacart grocery delivery, to McDonald’s, workers went on strike for safe workplaces, PPE and hazard pay.

Then in May, hundreds of farm workers went on strike throughout Washington state. “The most important demand for us is that we have a healthy workplace and protection from the virus,” said Agustin Lopez, one of the strike leaders. The workplace actions pushed one employer to close and disinfect the plant, and another to raise wages.

In the midst of the first wave it was crucial for non-essential workplaces to shut down and for PPE production to ramp up. But these shifts did not happen automatically: workers were essential to shaping this aspect of pandemic response.

In New York City, the Movement for Rank and File Educators (MORE) organized a meeting with 400 educators to plan a mass sick-out. This pushed the union leadership to confront the Mayor to close schools in March. At the same time educators demanded food, shelter and services for students and families.

Similarly, Green Jobs Oshawa organized a caravan demanding to reopen a shuttered GM plant and convert it to mask production. As Tony Leah explained, “The Canadian government issued a ‘call to action’ on March 20 – calling for companies to manufacture needed equipment. But there have been no orders to corporations, no national planning, no co-ordination. If our governments can mandate workers and remove their collective bargaining rights – they can mandate corporations to meet public needs.” After a three week campaign, the government announced GM would manufacture masks in Oshawa, but would only recall 50 to 60 workers of the 5,000 GM fired.

Pandemic response requires safe healthcare, but even this has been a fight during COVID-19. In the US many hospital executives have given themselves bonuses, while disciplining or firing frontline health workers for speaking out against the inadequate pandemic response. “I’m joining the union because the COVID crisis has brought to light several issues that have existed for front-line staff and we need to do something about it,” a nurse with Denver Health Workers United explained in May. “With a united voice, we can advocate for ourselves and therein provide better care for our patients.”

In Canada, nurses and personal support workers–mainly women of colour–have been disproportionately affected by COVID-19. The epidemic in long term care homes is partially a reflection of the working conditions of these frontline workers who are paid low wages, denied paid sick days, and overworked in multiple locations.

But in July, PSWs and nurses took action at Hillcrest Reactivation Centre, a private rehab hospital in Toronto. A unionization drive in 2019 had created a foundation that enabled swift organizing when their employer informed them they wouldn’t qualify for the province’s pandemic pay. While ensuring residents were safe, staff held a physically distanced protest in the hallways, with signs reading, “No increase? No work!”. Kim Francis explained the standoff: “They told us that there would be consequences and possible punishment. In my opinion, they were shocked. Most people were scared. They thought they would lose their jobs, but I told them they can’t fire eight people at once!” After half an hour, management agreed to a meeting with the company’s national vice president, who conceded to the $4/hr wage increase.

As the report in Labor Notes explains, “Health care workers, who have no legal right to strike in Ontario, have turned to workplace action to pressure employers and the government for protection and compensation. Over the past few months, sticker days, moments of silence, informational pickets, and mass grievances have been organized in hospitals and long-term care homes across the province.”

COVID-19 has highlighted the racialized conditions of housing, transit, and work that put BIPOC communities at risk–and the racist police that maintain this system. By striking against low-pay and inadequate protections and building working class solidarity, the wave of COVID-19 strikes have themselves been strikes against a racist economic order. And this strike wave has intertwined with a strike wave against racist police.

There have been 1000 strikes across the US since the start of the pandemic, including 600 in June after the racist murder of George Floyd. This strike wave included Black dockworkers shutting down ports along the East and Gulf Shore Coasts. As Ken Riley, President of ILA Local 1422, explained, “It was a moving event because we were able to show as workers our ability to stop global commerce. Any responsible manager is gonna look at that and say ‘Look, we are gonna have to deal with these people, or we are gonna have a problem.’” This grew to a Strike for Black Lives in 25 cities in July, an NBA players strike in August, and both scholar and student strikes across the US and Canada in September.

Fortunately, there’s a second wave of workers organizing and taking action. The #SafeSeptember campaign throughout Ontario has raised demands for student and worker safety, and in this context some teachers have also taken strike action. Teachers at St Joan of Arc HS in Mississauga showed up for their first day and found the medical masks promised to them were not available. As one worker said, “working would have been violating the board’s own policy on health and safety.” After a coordinated work refusal, the administration brought teachers new PPE.

Meanwhile, 1,400 Dominion grocery workers in Newfoundland are on strike against Loblaws. Loblaws’ owner Galen Weston Jr. is a billionaire; he and his company have enjoyed increased profits since the beginning of the pandemic, even with a $2/hr pandemic pay increase. Now frontline workers need pandemic pay to be permanent, by raising the minimum wage and converting part-time into full-time jobs. But in the midst of the second wave, Weston continues to put profits over human lives. Dominion stores in Newfoundland eliminated 60 full-time jobs last year, and cut workers’ pandemic pay in the middle of bargaining.

You can help by signing the petition to support striking Dominion workers. Post your own “I support Dominion workers” selfie or video on social media, tag @Loblaws and @Unifor Local 597 and use these hashtags: #15andFairness #fairpayforever #CanLab #GalenWeston