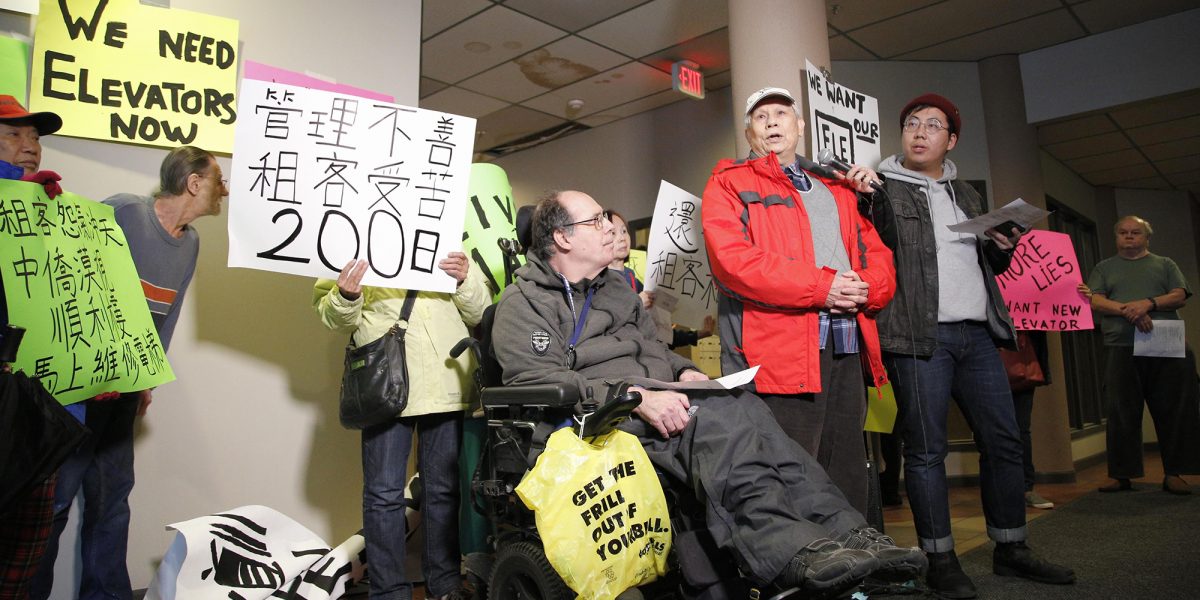 The COVID crisis has highlighted the urgent need for social housing, and the threat of anti-Asian racism. Spring Magazine spoke with Nat Lowe, a labour and community organizer, and member of Chinatown Tenants Organization, about previous successes in tenant organizing, the need for working class solidarity against racism, and the vision of housing for all.

To start, could you tell us a little about CTO, Chinatown Tenants Organization, and what kind of organizing you do?

We’re a grassroots group that’s organizing to build tenant power in Vancouver’s Chinatown. We started a couple years ago, just door knocking buildings. And it was really built on the work of Chinatown Action Group, and Chinatown Concern Group and, and the campaign around 105 Keefer Street, and other community organizing efforts in the neighborhood. And we saw the need for a vision for organizing. There’s a lot of, I think, community organizing that was happening in Chinatown, but I think we all really saw the need of kind of paring down our work really to focus in on base-building work and organizing and getting to that door-to-door base expansion work.

So we started there and then we had our first kind of victory. There was a lot of door knocking that happened prior to that. A lot of failures. But our first victory was working with the Solheim tenants around their elevator being down for over six months. So that was a good victory. And it was hard, but it was fun.

After the Solheim [campaign] we were trying to help them set up their tenant association so a lot of work went into trying to help them set that up. So that looked like setting up different caucuses, so we set up a Chinese caucus to create a space for the Chinese tenants in the building to meet among amongst themselves, speaking their own language and to build connections there.

It’s definitely a challenge to organize; it’s a challenge to have multilingual meetings, and English speakers tend to dominate the room in those types of situations. So we were trying to build spaces that allowed for more Chinese tenants to step into that. And we’re also doing workshops around, how do you organize around an issue? And they had a lot of experience with that over the elevator but then they were also like, “Oh, well, we have all these other issues that we want to deal with. How do we deal with those?” and sometimes those issues weren’t as clear cut as the elevator either. So one issue was around their windows not having been washed for over 10 years or something, and it was just really gross. And they had all these common spaces before that were locked up, so they couldn’t use them.

They wanted to work on all these other issues, but they were like, ‘how do we work around these things? How do you have meetings and notify the other tenants, and how do you get more tenants to join these meetings?’, all those kinds of questions were different in a post-campaign mode kind of world, but it was important to do. All of those issues were still things that they kept wanting to work to resolve, and they were able to slowly win things, one after the other. Like they got their windows washed, they were able to get one of the common rooms back, which was locked out for many years. And they turned that into a common computer room, which is really neat. And the tenant association had got the keys so that they can help manage that space. So they won those types of things, which I think really helped them improve the quality of life in the building. So, we were really focused on that.

After that we were just doing door knocking. We were using a survey where we would go into new buildings, and we would hear about some buildings in the neighborhood that we would want to check out. So we would try to get in there and just start from the top and then go all the way down and ask people to fill out surveys. And the survey was really a way for us to just identify issues in the building number one, and then number two, potentially identify any leaders or activists in the building who would be willing to help us or give us information or connect us with other tenants, that kind of thing.

We’ve all seen this huge rise in anti-Chinese racism around COVID-19. I wondered what you’re seeing and what you think of some of the responses, like calling for more police presence?

Yeah, it’s kind of a wake-up call in a lot of ways. Because I think Chinese people and Asians – there’s this myth of the ‘model minority’ right, like that Asians are the minority group that works hard, and they can achieve all these things like getting an education and what it does is it pits people of colour against each other. We’re often used as contrast to other communities such as Indigenous communities or Black communities.

But with this rise of, you know, very scary anti-Asian racism where people are getting punched in the face, people are getting physically assaulted and slurs or objects are being thrown at them, and these types of things that really flips that, right? So now we see the ‘yellow peril’, kind of come back, where just because you look Asian, you’re kind of seen as this vector of disease, because Trump is calling it the ‘Chinese virus’ and this type of stuff. So I think it’s a wake-up call for Asians. And it also kind of calls into question, what do we do about these types of things and how do we stop these kinds of more explicit attacks? And I’ve been thinking about that a lot.

I think there’s a tendency to rely on the police. That’s definitely a response that we hear a lot from tenants themselves even before COVID, when something happens. They face racism daily, even before COVID and anti-Asian racism obviously existed and is prevalent in Vancouver and in BC. So they deal with that and so it’s sometimes their initial response, you know, ‘we need the police to take action and we need justice’, right? And so it takes a lot of relationship building and trust around trying to talk through why that might be not the best solution to the problem, but I understand why a lot of community members see that as a solution. So obviously I’m not for police and definitely anti police.

But I think it’s also a question of how do we stake out a position but also do the work of building solidarity between communities. And that’s really long term kind of work. It’s hard and long term work that needs to be done, building understanding between tenants. And the Solheim case, I think is one example of that where multiple nationalities within a building worked together on this issue, and there was a lot of collaboration and I think they have really built some solidarity there. And those types of organizing efforts are really important to do. And it’s not always an immediate solution to the anti-Asian racism that’s happening now, but I think that long term work is so necessary and especially building solidarity with other communities that are facing attacks; you know, white supremacy. I think anti-Asian racism is a product of global capitalism and white supremacy. While Asians are scapegoated here, anti-Blackness is manifesting in China as Africans are being blamed for coronavirus. These racial divides only serve the elite and ruling classes. All the more reason why we need to seize this moment to fight anti-Asian racism decisively but also build working class solidarity across nationalities.

I wondered what you thought about what we can do to try to get out of this trap we seem to be in where the for-profit housing sector is making it very difficult to find affordable housing?

Yeah, I’ve talked about this a little bit before. The work of CTO was born out of the 105 Keefer Street campaign and that campaign was really about one site, to stop luxury development from being built there. But also, the demands for that site were for 100% Social Housing and a Community Center. And, and that was really key because I think there were a lot of other groups in Chinatown who just didn’t want to see a tall tower but they were okay with maybe a shorter luxury condo tower or things like that. So I think we really built unity around that vision, and it was also born out of like a vision.

We also did a community vision around, what do you want to see in the neighborhood and one of the things was more affordable housing. So linking up those site fights and individual base-building efforts to the broader vision for the community, for the city for the province and for the world, I think is really critical. And we have to keep those both in balance. But definitely, we can’t get there without the base building, right. But we definitely need to work towards de-commodifying housing, demanding social housing—massive amounts of social housing—because that’s really the only way that we’re going to ever be able to provide housing as a human right, and get out of the trap of fighting for the crumbs.