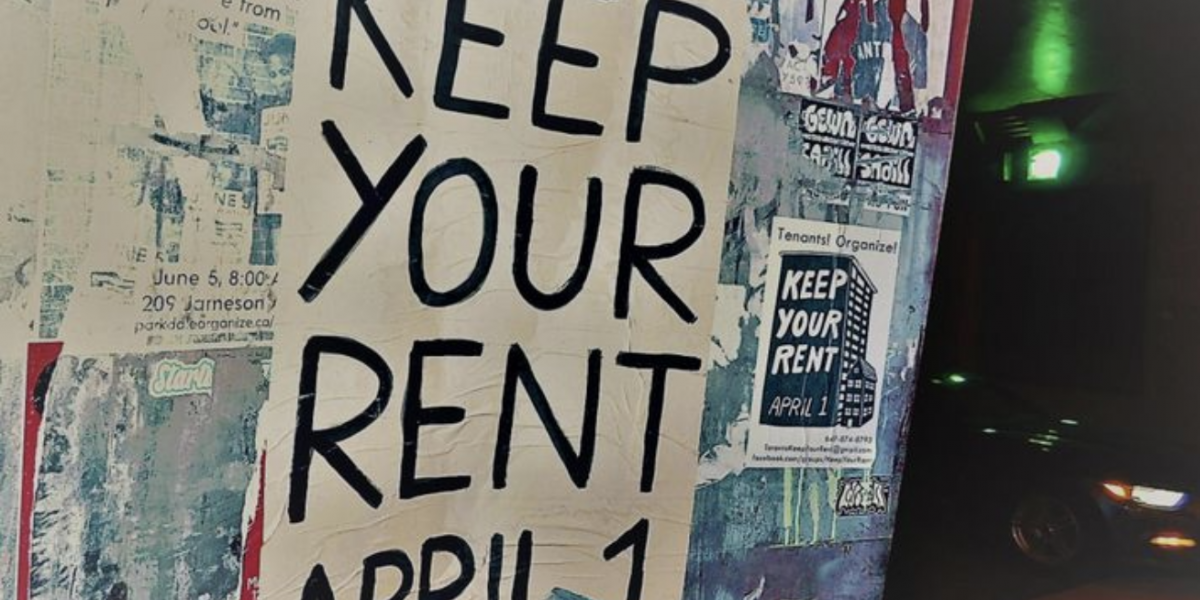 As the number of recently unemployed workers grows due to the economic crisis triggered by COVID-19, so too does the number of people who intend on withholding rent this April 1.

At the same time, the over 500,000 renters in Toronto have been left entirely high and dry.  Although the government has said that new evictions will not be pursued for the next three months, there is nothing stopping landlords from asking for back-rent and/or evicting tenants after this period is over. Renters live paycheque to paycheque with little to no savings, meaning that for people who will not be seeing a paycheque for the first time this week, the strike is not just a means to send a message, but the only means to keep food on the table.

The Ontario government has not done enough to protect workers during this health/economic crisis, and one small step in the right direction is to wave rent and mortgages for the duration of this crisis, and let banks foot the bill. This is something that workers urgently need. Premier Ford has publicly stated that “If you can’t pay rent, and you’re just in absolute crisis, then you don’t have to pay rent.” But Ford has not outlined any actual protections for those who would follow through with his advice.

Since they have yet to take concrete action, it is being left in the hands of the tenants themselves. A change.org petition to cancel rent and mortgages has over 650,000 signatures. On Facebook the group called Keep Your Rent Toronto has amassed over 4000 members in one week, many of which are already well versed organizers who have first hand experiences with direct action. Many others have put up posters in their neighbourhoods with contact information in order to connect with other tenants.

As Paterson, one Parkdale rent strike organizer described, “so far I’ve had pretty good success. It feels small, but I’ve got almost 20 tenants on board to keep their rent, and it’s growing every day. It’s difficult to organize in my building since it’s so big, but almost everyone I’ve talked to so far feels really positive about Keep Your Rent.”

“I’m pretty new to this, and it feels scary, but knowing that it’s rooted in a belief of collective care and that our society is absolutely able to do better for its members is helping to keep me going,” said Anna, another rent strike organizer. “Community is way more important than we’re led to believe.”

Some have said that they are worried about ruining their relationship with their landlord. As Anna noted, “if you have a good relationship with your landlord, urge them to put pressure on the banks and the government to suspend rent, mortgages, and bills.”

“A tenant and landlord relationship is inherently antagonistic. The relationship isn’t equal,” said Paterson. “Landlords hold a lot of power, power that is recognized, and enforced by the state. Landlords’ business is extracting wealth from housing, a human necessity.”

Many are also asking about the consequences of withholding rent once things go back to normal. First thing is first, it is highly inadvisable to rent strike on your own. In order to actually pull this off, it is important to gather the support and solidarity of as many people in your building as possible.

As Paterson explains: “I started with people closest to me. I emailed the handful of friends I’ve made at the building first, then extended to any other emails/phone numbers I have from interactions in the past. I also put up posters all around my building, and just while doing that I talked to a ton of people who were interested.” Talking to your landlord is the last step to take after the tenants have organized.

As it stands at the moment, evictions are suspended, which means that although you cannot be evicted within the next few months, it is likely that you will individually owe back rent, or be evicted if you don’t have a majority support of the other tenants in the building acting in solidarity.

“The thing I want to drive home the most, is that you have to organize if we’re going to win this. You have to talk to your neighbours face to face, on the phone, or in an email. Petitions, memes, arguing in the comments, it’s not going to get us there.” said Paterson. “Working class people making decisions for themselves, together, is where the real power is.”

With every passing day the economy seems to be taking a turn for the worse, making a return to ‘normalcy’ even less likely. Imagine that we come out of this struggle with every building having a tenants association, operating on the principle of mutual aid. Imagine all rent being geared to our actual incomes. Imagine housing as a public good. This is not just about refusing to pay rent in April, this is about forcing the banks to pay, this is about forcing a major political concession from the government.

What we do in the next few months will dictate what that normalcy looks like when we return. In the wake of this crisis we have a very rare opportunity now to decide how our society is structured, and we need to make the most of it.