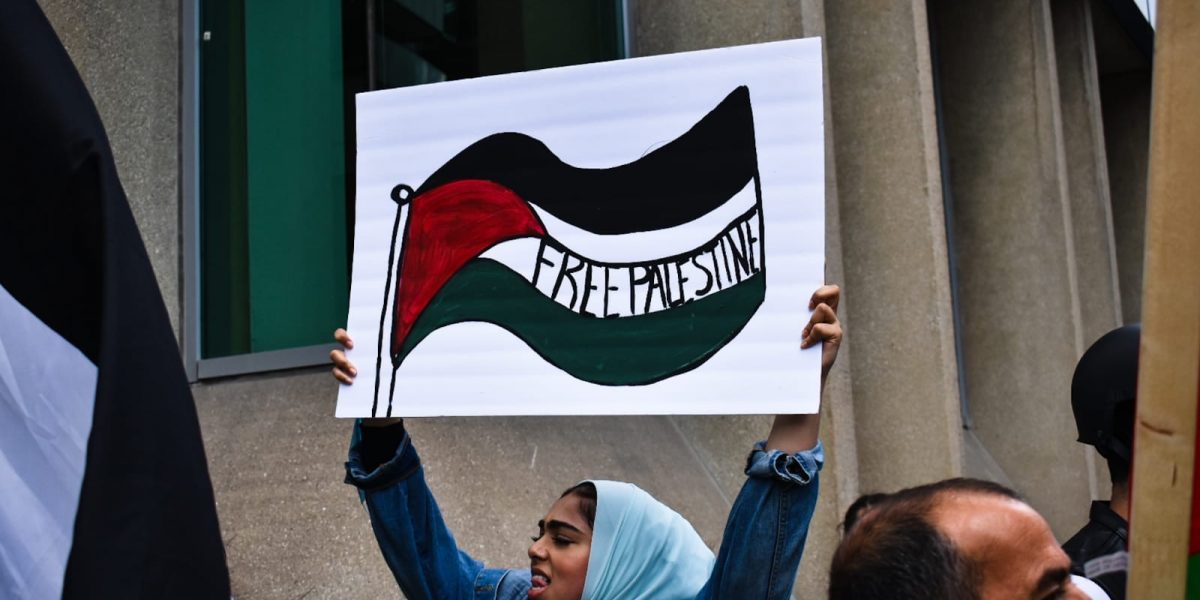 Over two hundred people rallied in downtown Toronto on Saturday to oppose Israel’s attempt to annex large portions of the West Bank. The rally was organized by a broad coalition of community, labour, faith, and social justice activists, with Palestine House as the lead organization.

Hammam Farah and Suzanne Weiss were co-M.C.s of the rally. Hammam, a long-time organizer in the Palestinian community, led participants in chants of “Free, free Palestine!”; “Fight the power, turn the tide! End Israeli apartheid!”; and “From Turtle Island to Palestine: Occupation is a crime!”

Suzanne, a Holocaust survivor and Palestine solidarity activist, opened the rally with an Indigenous land acknowledgment, linking Palestine’s struggle against Israeli land confiscations with the struggle for Indigenous sovereignty in Turtle Island.

In his words of welcome, Hammam paid tribute to those who have been killed by racist police violence:

“We are here to say no to the illegal Israeli annexation. No to apartheid. Now is the time for meaningful action. Now is the time for sanctions! We’re here because we’re inspired by Indigenous struggles, we’re inspired by Black Lives Matter, we’re deeply affected when our siblings are murdered in cold blood by police and military occupation forces. Eyad Al Hallaq, Ahmad Erakat, George Floyd, Regis Korchinski-Paquet, Ejaz Choudri, and countless, countless others. We stand here today with you in solidarity and struggle. Yes, it’s that spirit of solidarity that binds us together, that keeps the flame alive in all of us, in Palestine, on Turtle Island, and within all those who believe a better world is possible.”

While participants were still gathering, a tiny handful of Zionist provocateurs–dressed in hockey helmets and IDF t-shirts–attempted to disrupt the rally by shouting racist and sexist slurs and harassing elders. It was not lost on the crowd that the police officers present did nothing to intervene when the provocateurs repeatedly threatened violence.

In the end, a united response from rally participants–loud and enthusiastic chanting–isolated the provocateurs and drove them away. Cheering and applauding erupted as the disrupters left the event.

The diversity of the rally, as well as the depth of support for Palestine, was visible in the broad range of invited speakers, which included representatives from several trade unions (CUPE, CUPW, OPSEU), the Canadian Peace Congress and the Canadian Peace Alliance, Independent Jewish Voices, and numerous Palestinian community groups and campaigns. Among the rally participants were many students and youth, community elders, members of various faith communities, anti-racism campaigners, and Palestine solidarity activists.

The same diversity was visible in the countless colourful homemade placards and banners, which appeared throughout a sea of Palestinian flags. Many participants wore keffiyehs, the traditional Palestinian scarf that is a symbol of the national liberation movement, including some whose face-masks displayed the keffiyeh’s distinctive black-and-white pattern.

Saturday’s rally was one of several held across Canada, and many dozens all over the world, in response to Israel’s threat to annex sections of the West Bank at the beginning of July. On May 28, 2020, Israeli Prime Minister Benjamin Netanyahu announced plans that, if implemented, would completely separate the West Bank from the Jordan River, the Dead Sea, and the international border. Netanyahu’s announcement follows a campaign pledge he made during September 2019 elections in Israel, which was meant to harness the support of extreme right-wing voters, but also expressed a continuation of Israel’s decades-long illegal confiscation of Palestinian land.

Israel’s move to annex any portion of the West Bank would be a violation of numerous United Nations resolutions and countless international laws. Land cannot be annexed that was gained by military force, according to UN Resolution 242. Annexation would also violate the terms of the Oslo Peace Accords and further entrench Israel’s apartheid practices and policies that deny Palestinians basic civil and national rights.

Netanyahu’s annexation plan would affect up to 300,000 Palestinians, most of whom would not be offered citizenship rights after annexation.

Shamefully, Canada has been largely silent on Israel’s illegal plans. A large focus of the rally in Toronto was about putting pressure on the Government of Canada to oppose and publicly condemn any attempt by Israel to annex the West Bank and to push Canada to take concrete steps to stop the annexation. Rally speakers suggested that, as an example, Canada could impose sanctions on Israel or suspend the Canada-Israel Free Trade Agreement, as a means to apply international pressure.

At numerous points, the crowd chanted: “Justin Trudeau, can’t you see? Palestine will be free!”

In the lead-up to the rally, organizers issued a public statement to oppose the annexation, signed by numerous Palestinian, community, labour, faith, and social justice organizations, and to demand the Government of Canada take appropriate measures to stop Israel from moving forward with its plans. Read the statement here.

Organizers also issued the same statement as a petition, so individuals could express their opposition to the annexation and pressure Ottawa to act. Sign the petition here.

On June 2, the Canadian Labour Congress issued a clear statement against Israel’s annexation plans, which echoed many of the demands raised by the Palestinian community:

“The government of Canada must send a strong message in opposition to the illegal and unilateral annexation of Palestinian lands and officially recognize the State of Palestine, based on the pre-1967 borders. Canada must consider a forceful response, including revisiting the Canada-Israel Free Trade Agreement and other bilateral agreements and the imposition of economic sanctions against Israel.”

More protests against the annexation are planned in the days and weeks ahead, including the Day of Rage – No to Annexation protest on July 4 in Toronto, organized by the Palestinian Youth Movement.

Spring encourages its readers to show their solidarity with the Palestinian struggle and to take the following steps to oppose Israel’s illegal annexation plans: