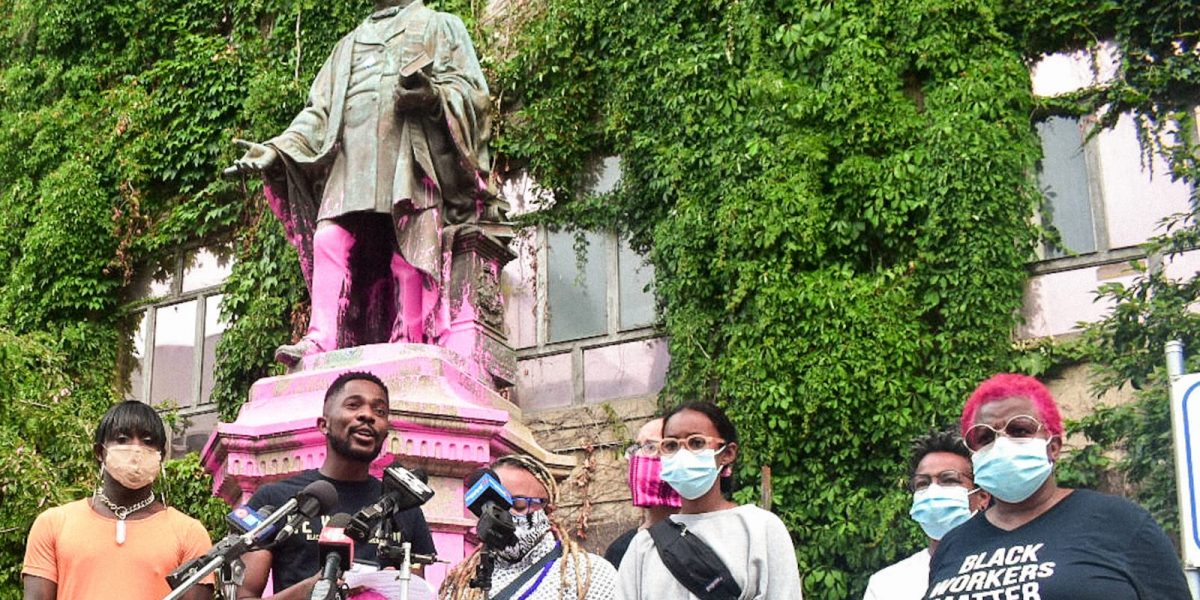 Following the late-night release of protestors that were held by the Toronto Police for 12 hours at 52 division, Black Lives Matter-Toronto (BLMTO) held a press conference at 55 Gould Street on the morning of Sunday, July 19. The day before, BLMTO organised an art-based action that focused on colonial relics that exist around Toronto like the statues of Egerton Ryerson, John A. Macdonald, and King Edward II.

Egerton Ryerson was one of the main architects behind the residential school system. John A. Macdonald implemented a policy of land theft and starvation to quell Metis dissent. The statue of King Edward II, located in a park behind Ontario’s legislature, was originally located in India but was removed because of protests against colonialism.

The police arrested three participants involved in the action. Deploying kettling tactics used during the G20, police cruisers surrounded a van with three protestors and made arrests. Community members were told that the activists would be taken to 52 division for processing. The Toronto Police held the activists for nearly 16 hours and remained ambiguous about their whereabouts and release. One of the protestors held at 52 division was denied access to their medication until the very last minute, placing them at increased risk of suffering a seizure. All three protestors refused to sign papers with conditions that were imposed on them by the police because they could not access their legal representatives.

“They separated our friends and our comrades, trying to separate us but we would not leave, we would not be moved,” said Raven, a BLMTO leader. “Our people were held for so long, moved around without counsel, despite being no threat to the community.”

Raven pointed out that it the same precincts that were responsible for the bathhouse raids were confining activists yesterday.

“If the police are committed to change, why were they arresting peaceful protestors? Where is their solidarity now? Where’s your kneeling police chief now?” asked Raven. “The police proved our case yesterday but it was against our bodies yet again.”

As hundreds across the city joined the sit-in, a rally was organized in front of 52 division calling for the immediate release.

“We have been organizing to defund the police– arguably the largest monument to slavery and colonialism currently on Turtle Island and Inuit Nunangat. The state came down very hard yesterday because we are winning. As people like Sandy & Nora said in their podcast, ‘we have already won.’ Because the call to defund, disarm, dismantle and abolish the police is not a Toronto call. It’s a worldwide call and it is global. There are people writing messages all over this planet, screaming from the rooftops and the mountaintops. It’s time to defund the police. It’s time to dismantle the police. It’s time to disarm the police. These messages are so large and so bold that some of them can be seen from space. This is how big this movement and conversation is. This is what it looks like to be winning. We have already crossed the hump. They will be defunded. We will get abolition in our lifetime, and so of course what they are doing is that they are criminalizing dissent.”

The police responded to the organizing efforts of BLMTO in front of 52 division by engaging tactical resources from three different divisions, including 52, 55, and 14. The police deployed horses, undercover officers, and as Rodney Diverlus, an organizer with BLMTO, told the media, “even the chief of police seemed to have come out of early retirement to spread propaganda and lies all last night.”

Diverlus pointed out the hypocrisy of police deployment when dealing with Indigenous and Black victims of police violence:

Diverlus said that the community action in front of 52 division establishes a new precedent. The political pressure worked as police will often elect to hold those in custody over the weekend until their bail hearings on Monday morning. All three accused were charged with indictable offences, usually carrying a fine and rarely any jail time. Their next court date is on September 30.

“If the police thought they were going to sully our call for the defunding of the police, they were gravely mistaken and frankly delusional,” said Diverlus. “This has only strengthened our resolve that the police need to go and we need new systems of safety where we as a community keep each other safe as evidenced by the fact that it was the police and not the protestors that escalated yesterday.”

“As the city is scrambling to make its shortfall, we say there’s only one place to make up for those missing funds–the Toronto police,” said Diverlus.

Diverlus reminded the gathered press that the Toronto police budget is more than the amount allocated for libraries, housing, shelters combined and reiterated the demand for an immediate 50% reduction to the Toronto Police budget. The funds should be redirected into housing for street-involved and unhoused communities, food security programs, public transit, public health, public libraries, and community-led anti-violence programs.

“We will ensure that our children’s children will be born free from this legacy of slavery and colonialism,” added Marcus Ware.