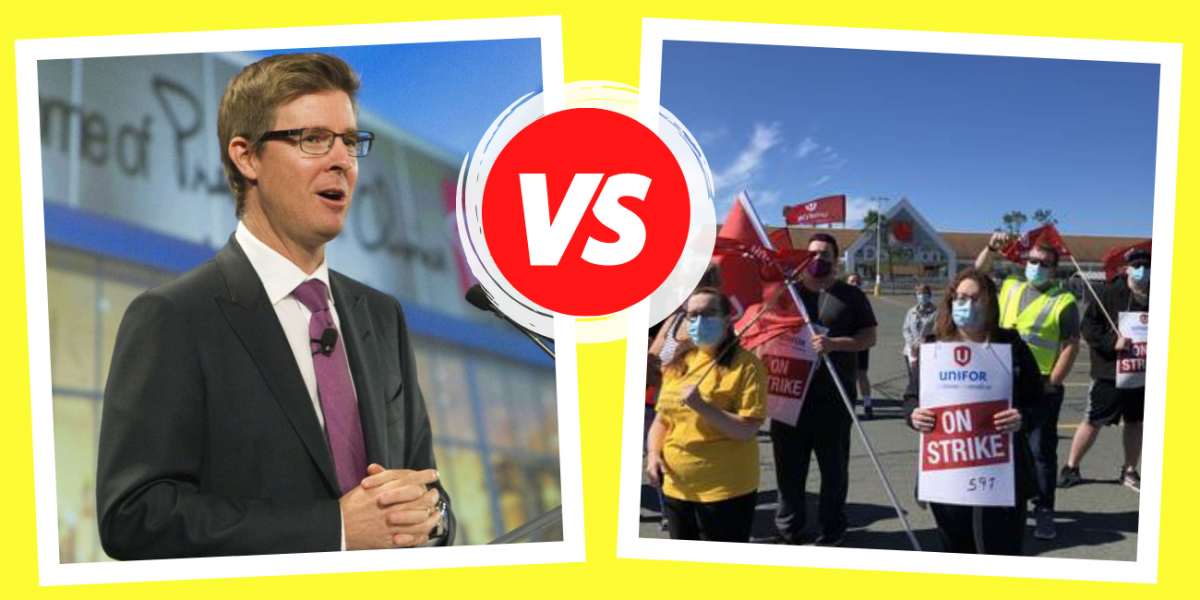 Over 1400 workers at the 11 Loblaws-owned Dominion grocery stores in Newfoundland have been on strike since August 22. The workers are striking for fair wages, paid sick days and full time jobs.

Over the years Loblaws has turned many full-time, stable jobs at Dominion stores into low-paying part-time jobs with little to no benefits. In 2019 alone, 60 full-time positions were removed. Over 80 percent of the workers at Dominion are currently in part-time, precarious positions and barely make over minimum wage.

In April, Loblaws instituted a $2/hour pay increase for all its workers as pandemic pay. In June, the pandemic pay was cut, despite the fact that the pandemic is still with us. This decision outraged Dominion workers. As Robert Peddle, a 40-year employee at Dominion, said, “I think it’s shameful what they’ve done to people who have given their working lives to make them profit.”

In July the company and union agreed to a tentative deal that would have seen a rollback of the pay increase. The tentative agreement would have seen their pay increase by $1/hour over three years. Workers were quick to point out that they were just months earlier called heroes and now were being told to take a pay cut for a profitable company.

“Galen do you have any idea what it’s like to struggle to make ends meet? We were there for you when you needed us most – we stocked your shelves, we showed up every day and kept your customers happy”, said Dominion worker Kim Youden, “Now it’s your turn to be there for us.”

Members overwhelmingly rejected the proposed deal and were soon out on strike against one of Canada’s richest people.

Galen Weston Jr, the chairman of the Loblaw Companies Limited, has a net worth of $10.9 billion. Sarah Davis, the Loblaw CEO, received a total compensation of $6.7 million in 2019.

Weston and Loblaws have a long record of putting profits over people. The company has been embroiled in tax avoidance schemes like the Paradise Papers, with some estimates putting the taxes it has avoided at around $350 million. Weston and the company also have strongly opposed raising provincial minimum wages across the country, routinely violated labour laws at home and abroad and have most notoriously engaged in a 14 year long bread price fixing scheme.

In 2020, Loblaws saw its first quarter profits jump 21 per cent compared to the same time last year — an increase in net earnings of $42 million over the first quarter of 2019.

Meanwhile, the majority of workers at Dominion are part-time, have little to no benefits and make less than $12 an hour.

Despite record profits Loblaws is digging in its heels, hoping to force the workers back to work under the terms of the rejected contract. In early September Loblaw’s Atlantic Canada vice-president Mike Doucette told the workers “You need to know that this strike will not result in an improved offer,” and that reinstating the two dollar pandemic pay “sets all of us up to fail” as it would “literally put the business at risk.”

Who is going to pay for the crisis?

This is truly a fight between the 1% and workers. And that is why there is so much at stake, not just for the striking workers, but the entire working class. If the company and Westons are able to roll over these workers it will only make it harder for workers in the sector to win gains. It will embolden all employers to roll back pay, benefits and working conditions of all workers in the midst of the economic crisis.

But if these workers are able to hold out and win against this billionaire it will boost the confidence of other workers to fight. We know that the economic crisis is not being felt equally. Big corporations and the wealthy are raking in the profits during the pandemic, while workers — disproportionately women and racialized workers — are bearing the brunt of the crisis through higher unemployment, lost wages, reduced hours, over-representation in frontline and carework and increased exposure to the virus.

This pandemic has proven once again the essential role that frontline workers play in the functioning of our society. And yet, the majority of workers in these jobs are in precarious positions, have low wages and subpar working conditions and live paycheque to paycheque. Loblaws, as the largest Canadian food retailer, has played a direct role in devaluing these jobs through years of clawbacks of workers pay and benefits, turning full-time stable jobs into contract and casual positions and paying poverty wages.

Loblaws wants this strike to be ignored, and the workers to be discouraged and demoralized. Yet, the workers have demonstrated their willingness to fight against the Loblaws empire to demand their rights to good jobs, fair pay and dignity at work. It is now incumbent upon all of us to come out in support of the workers and send a clear message to Loblaws.

The Dominion workers’ strike is part of the larger struggle for workers who have been on the frontlines of the pandemic while underpaid and disrespected by greedy employers. This strike is a canary in the coal mine over the question of who will pay for this crisis. We must do everything in our power to ensure these workers put Weston in his place.

In the past few weeks, there have been a number of solidarity actions organized in front of Loblaws stores across Canada. Workers from coast to coast have also sent in their messages of support for Dominion workers through a video in a powerful show of solidarity. Thousands more have signed a petition and taken to social media to show their support and urge Loblaws to give the workers a fair deal.

To help support this important struggle and ensure that frontline workers at Dominion stores can win their fight against Loblaws and Galen Weston: