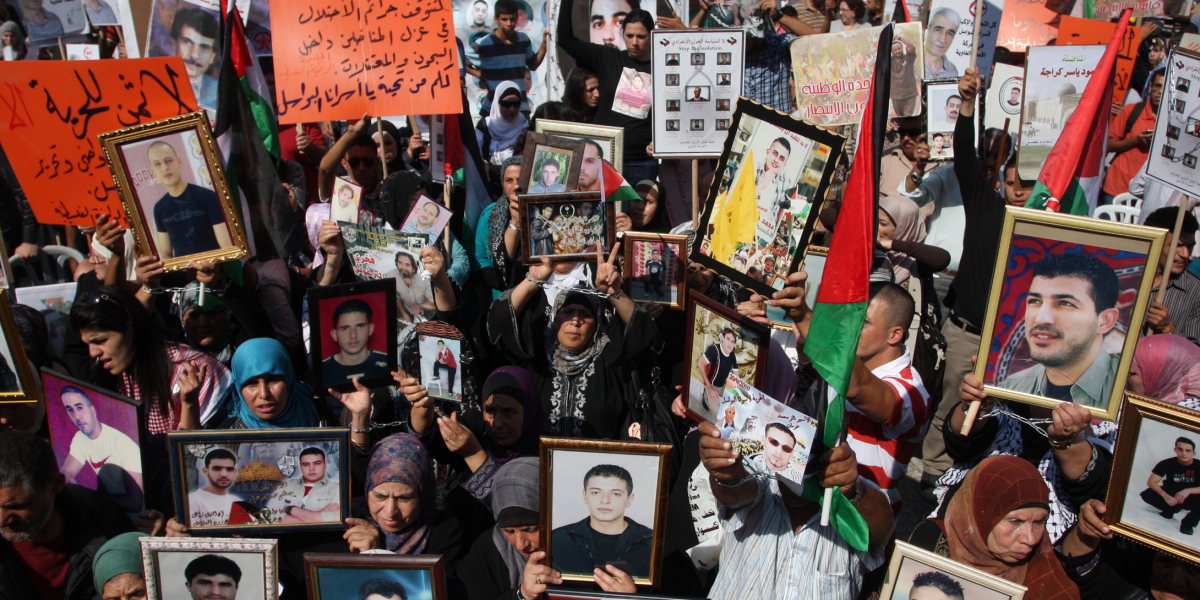 The Palestinian struggle for national liberation can be seen in microcosm in aspects of Palestinians’ daily lives and the multiple dimensions that the struggle plays out in, be that in the inhumane siege on Gaza, the political economy of the occupation, the fragmentation of parties, etc. Of course, the Israeli occupation and settler colonialism work their way into the most intricate details of Palestinian life. But there is one dimension that needs to be centered in the solidarity movement: Palestinian political prisoners. There are multiple reasons why focusing on Palestinian prisoners not only brings more clarity in relation to Israel’s policies and progression as an occupying power, but also hastens the liberation of the Palestinian people and land.

In many ways, every Palestinian inside an Israeli prison is truly free, and every Palestinian outside is indeed a prisoner: liberation will come once our prisoners have been freed from the physical reality of a prison–and once we have escaped its mental reality. Palestinian prisoners are on the front lines of the confrontation with the Israeli occupation and its settler-colonial forces, and their suffering is also our suffering.

During the immediate period of the global pandemic, the prisoners’ struggle has once again come to the forefront, as the first effects of the COVID-19 outbreak and the subsequent purposeful neglect perpetrated by Israel were felt most heavily by two sectors of Palestinian society: prisoners and workers.

Israel uses the prisons as a laboratory for testing its policies and approaches towards Palestinians, later applying related tactics in an attempt to impose conformity or extract other ramifications for the rest of the Palestinian society and diaspora. The Israeli prison system attempts first to break Palestinians into submission and suppress their will. Israel either assassinates or imprisons figures or community leaders who are not afraid to challenge the status quo or the conditions under which they live.

One example of Israel’s escalating aggression towards prisoners could be seen with the head of the Israeli Prison Services (IPS), Yaacov Ganot, in mid-2003 under Ariel Sharon’s government. At the time, during the second Intifada, Israel was looking to break the movement on the ground inside occupied Palestine. As a member of Sharon’s government, Ganot took harsh and cruel measures in an attempt to break the prisoners’ movement. This was also verbalized at the time by Israeli Internal Security Minister, Tzahi Hanegbi, who told the Israeli media: “As far as I’m concerned, they can strike for a day, a month, until death….” in response to Palestinian prisoners’ hunger strike. When Israel is making a shift in its treatment of Palestinians, pay close attention to what happens behind prison bars.

Rallies or protests are usually called for, once word of a hunger strike reaches the outside. These demonstrations take place in Palestinian cities, villages, and refugee camps, and in the Arab region and international cities, organized by Palestinians in the diaspora as well as by solidarity groups. On the surface, this seems to be a simple act of solidarity with the prisoners, which it is. On a deeper level of understanding, however, the prisoners send the signal for the rest of us to mobilize: they lead the charge of resistance from the inside and we challenge our fears from the outside by supporting them.

The culture around prisoners

The contemporary culture around Palestinian prisoners is unique. Outside of Palestine, rarely is it that we see delegations of people waiting outside the prison gates to celebrate the release of one of their own. But this practice is nearly universal in Palestinian society. The welcome applies equally to a high-profile leader and to someone with little or no public profile or recognition at all. Many national liberation movements did not pay attention to their prisoners. Once people were arrested, there was a strong chance they might never be seen again. The Palestinian movement, however, takes an approach that challenges that. Prisoners are a crucial part of Palestinian society and the Palestinian people as a whole vow to achieve their freedom.

Obviously, due to the monstrosity of life in a prison, freedom is to be celebrated. However, the experience of imprisonment is also a journey that the Palestinian prisoners go through, which certainly is going to bring them out stronger than they were before going in, if they do not come out broken. Plenty of Palestinians who are held under administrative detention or imprisoned on trumped-up, bogus, or falsified charges are politicized within the circles of these prisons, if they were not already involved in the movement. Typically, older, more educated, and experienced prisoners are the ones that educate the newer, younger detainees, in an experience often called a “school for revolution.” As a result, Israeli arrests may result in a politically charged generation with a deeper level of knowledge and experience.

There is no shortage of examples to cite. The targeting and arrests of university students, particularly at Birzeit University, demonstrate this well. It could be the political activity of a student that brings an encounter with the Israeli military, but in general any active student, youth, or community member is a suspect, as far as Israel is concerned. Any positive change in the Palestinian social fabric is also a step towards liberation, which Israel cannot allow. Therefore, a student working to challenge the socio-economic and gender gaps that exist among Palestinians will, in effect, pose a threat to the patriarchal system, to the Palestinian Authority, and, thus, to Israel.

Nagham Issa, a fourth-year student at Birzeit University, said of her university:

It is possible to predict the future political map of the country through a simple look at student elections. Here at Birzeit, when you sit down with your fellow students, you always have to say ‘goodbye’ as if it would be your last time together. It is very possible that, on that same night, our fellow students may be arrested by the occupation authorities, particularly if they are active in the student movement. This intends to drain the human spirit of the student leaders. Draining the material resources of the student movement is obviously another method to weaken the student movement’s effect and momentum. But the consciousness and loyalty of the students here at Birzeit will be ‘the dam’ where the plans of the occupation fail.

Prisons as agents of fear, fracture, and normalization

Israeli prisons serve to disengage and/or isolate the social and political leadership of the Palestinian people, which is why we often see social and political leaders on the inside. The main function of the prison is to force the Palestinian population outside to conform to the occupation, while  another aim is to force the prisoners to accept the reality that has been forced upon them. This may be carried out through unjust imprisonment or illegal treatment, such as torture and abuse.

It can be seen implicitly when Israeli interrogators routinely threaten or even charge the family members and friends of a prisoner. In some cases, Israeli interrogators have forced detainees to watch their friends or family members undergo torture; in other cases, they have been played recordings of screams and cries of distress or told that their family members are suffering. This is often combined with physical and psychological methods of torture directed at the detainee.

The purpose of this tactic is to force both Palestinians, inside and outside the prison, to live in a perpetual state of fear of challenging Israel’s occupation, its settler-colonialism, and all of their attendant injustices. The Israeli Prison Service often also tries to disengage and fracture the prisoners’ movement through an array of methods that include solitary confinement, isolation, randomized prisoner transfers, and so on. The prison also aims to disarm the political thinker: creating a condition inside their cells where they are focused on attaining entertainment, pleasure, or leisure, rather than speak about or agitate against injustice happening on the inside or on the outside. It is likely that a prisoner today will be deprived of books (especially political ones) and communication with other prisoners or with people on the outside. Instead, they may be given access to a TV with a supply of drama shows and perhaps a course or two in the “Israeli Open University”–themselves often withdrawn as a form of punishment and coercion for any prisoner mobilization.

These practices are meant to condition Palestinian detainees to believe that they can live a normal life under Israeli auspices. These are some of the many ways that Israel tries to normalize the reality of the occupation and colonization to the prisoners: by offering simple distractions combined with physical and psychological punishment, if they dare to resist.

There is much more to say about the Palestinian prisoners’ struggle than may be discussed here, including the prisoners of 1948, the Oslo Accords in relation to prisoners, the molding of a new prisoner consciousness, and developments and changes in methods of torture. Regardless, if it is the case that a Palestinian can resist torture and deprive themselves of food indefinitely for their rights and for ours, what stops Palestinians and their allies outside the prison gates and in the diaspora from resisting?

So I ask you this: who is the real prisoner here, the Palestinian sitting in the prison? Or us?

For more information, or to get active in the movement to support Palestinian political prisoners, please visit:

This article originally appeared in The Canada Files on June 2, 2020. Spring Magazine is grateful for the opportunity to reprint it here.