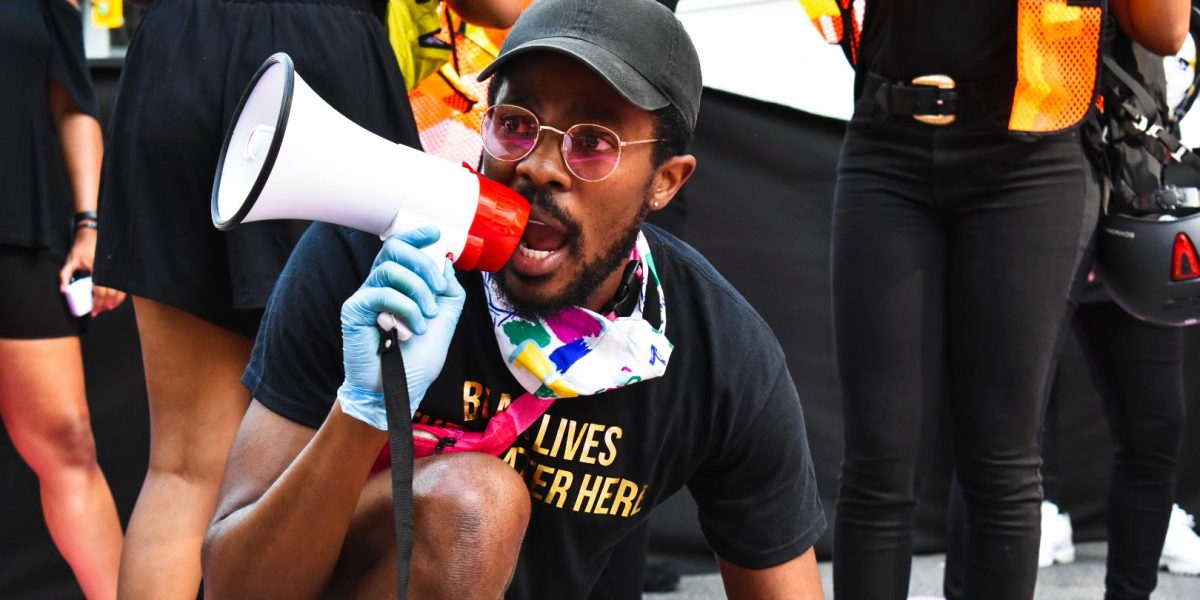 Black Lives Matter-Toronto (BLMTO) mobilized an arts based direct action, stopping traffic at the intersection of Bay and College in front of Toronto Police headquarters this morning. Black community members and solidarity activists held the street as artists painted “Defund the Police” in pink paint across the stretch of the road between Bay and College and College and Yonge street.

On June 8, 2020 Toronto City Counsellor Josh Matlow, supported by Counsellor Kristyn Wong-Tam, introduced a motion to cut the police budget by 10%. Activists across the city responded that 10% is simply not enough.  Rodney Diverlus, co-founder of BLMTO, told Spring Magazine, “We are here to let the public and the police know that we will not stop until they defund, disarm, and dismantle the police.”

Diverlus critiqued the proposed 10% cut by Toronto City councillors. He asked, “What’s the difference between a $1.1 billion police institution and a $1 billion institution? While the 10% cut is meant to placate the public, it’s frankly unacceptable. The fact that we’ve been talking about this issue way beyond my life time and this happened every decade. Every couple of years I’m here to talk about the same issue. Small concessions are unacceptable. People are dying, and as such, we’re asking for a minimum of 50% reduction towards the goal of zero. 10% does nothing.”

In response to the proposed motion at Toronto City Council he added, “We are demanding an immediate reduction of at least 50 % of the $1.1 billion budget and have those funds redirected back into our communities.”

Defunding is a strategy towards a larger goal of abolition by moving us towards reducing our reliance on the police, and building a community without police and prisons to resolve harm and emotional crises. Diverlus added, “I am critical of politicians who are wanting to defund the police not actually to defund the police but as an austerity measure to balance the budget. This isn’t about balancing budgets or saving money. Any money that is saved from defunding the police needs to go back directly into communities.”

Sarah Jama of the Black Lives Matter Movement said, “We are calling for the defunding, disarming, and complete abolition of the police. Black, Indigenous, and racialized people are targeted by the policing. We need to reimagine what community support actually looks like, and that has nothing to do with policing in settler-colonial Canada.”

Jama who lives in Hamilton commented on the defund motions that are being presented at city councils in Hamilton. She pointed out that City councilor Chad Collins did not move the motion in good faith. He did so to actually demonstrate that defunding is not possible, but two councillors, Nrinder Nann and Maureen Wilson, have joined calls to cut the police budget.

This morning’s action in Toronto is the first amongst five different actions leading all the way up until Sunday.