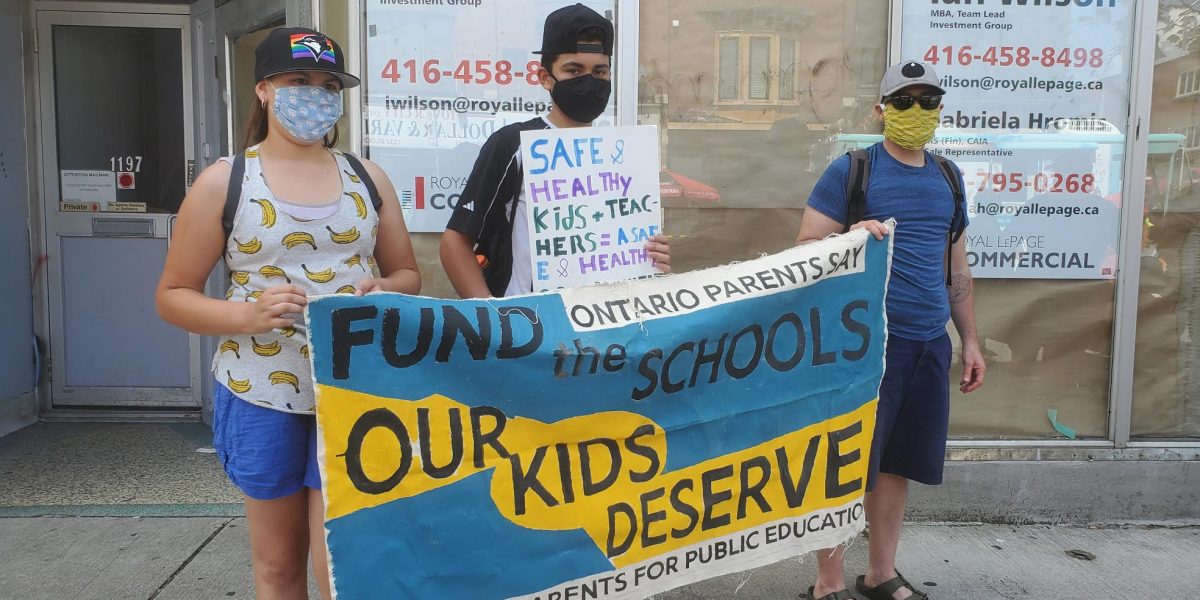 On July 29, a coalition of parents, education workers and students organized a province-wide day of action in Ontario calling for proper government funding to ensure a safe return to school plan for September.

The day of action was preceded by two days of a social media campaign where the organizers asked the educators, parents, students and the community to send messages to Premier Doug Ford’s office and share their support for the campaign on social media. As a result, the campaign’s hashtag, #SafeSeptember, was one of the top trending hashtags in Canada for two straight days.

On the day of action, there were 122 MPP visits planned across the province including at the office of the Minister of Education, Stephen Lecce, and the opposition critic, Marit Stiles. Community members and supporters brought the message for a fully-funded and safe return to school to the MPP doorsteps.

In March 2020, the Ontario government closed all the province’s schools in response to the COVID-19 pandemic. Teachers and students were asked to finish the remainder of the school year in an online format. Later in June, the government announced that they are working on a number of health protocols for reopening schools in September and that school boards were asked to prepare three separate plans for the school year: a fully online learning module, a hybrid plan where students would only attend in-person classes on certain days or weeks and a third plan for a full resumption of in-person classes.

A number of school boards, including the TDSB, have already noted that a full resumption of classes with limited class sizes and proper safety protocols would require a significant boost in funding for schools. The government, however, has so far only committed to a mere 7 cent per student in funding for the school reopenings.

“What the government is doing with the amount of funding they’ve allotted is sending a message to parents that you can send your kids to school in a dangerous environment and risk both their health and safety and yours if you want to ensure that you don’t lose your job or your housing,” said Jess Lyons, an organizer with the Ontario Parent Action Network. “And that’s a chilling message and a terrifying choice for parents.”

To be able to prepare for a safe return in September schools would require additional funding for hiring teachers (TDSB has estimated the need for an additional $249 million in funding to hire 2500 new teachers in the event of a full resumption of classes) and additional cleaning and support staff, providing PPE and cleaning supplies, conducting necessary repairs to buildings and equipment among other things.

The call for adequate funding for a safe return to school has been echoed by teachers’ unions and parent groups and is one of the main demands for the #SafeSeptember day of action.

“A safe return to school is going to be expensive. We need to be clear about that. But we know that our kids and communities are worthy of investment, they are our top priority,” said Melanie Willson, a member of the Ontario Education Workers United. “The government needs to provide proper funding both to hire more more educators and to fund before and after school care programs that keep cohorts of students together and limit community spread.”

Prior to the COVID-19 pandemic, the education sector in Ontario was facing years of underfunding and austerity measures. This has resulted in increased class sizes, shortage of teachers and education workers, rundown buildings and deferred maintenance.

These conditions make the shift to a safe model that is responsive to the requirements in a pandemic even more difficult and costly. Without a real investment in the school system any reopening efforts are doomed to fail as the education infrastructure has been severely weakened by years of austerity.

Call for safety strikes in the U.S.

The concerns regarding unsafe, under-funded and poorly planned school reopening schemes are shared by the teachers and parents in the US. A similar campaign for demanding safe schools has been gaining momentum in many US states the last few weeks and educators are calling for no school reopenings until scientific data supports it and the creation of safe conditions when the schools do open, among other demands.

Earlier this week, the American Federation of Teachers also sanctioned potential “safety strikes” by its members if their demands for protecting the health and safety of school educators are not met.

Among the similarities between the campaigns in Ontario and the one in the US is the adoption of a number of broader social demands by both groups. Aside from the direct asks for funding and safety standards at schools, there are demands for food security and housing justice, paid sick leave, racial justice and accessible childcare.

When asked about the inclusion of these broader social demands, Lyon noted that the demands came out of conversations among parents and teachers across the province, “in our call for safe schools, we understand the notion of safety to be much broader and one that includes safety from harassment by the police, from eviction, and from food insecurity. These are all connected issues.”

On the inclusion of the call for paid sick days in the province, a workers’ right that was removed by the Ford government, she added that “when there is no mechanism for paid sick days and the parents of a child cannot stay home to take care of themselves or their children without risking their job, then we’re increasing the risk for infections and undermining safety at our schools.”

With only weeks until the beginning of the school year uncertainty clouds the reopening of schools. There are immense pressures on the government and the school boards to come up with a plan and respond to the critical concerns raised by education workers and parents. The Minister of Education is scheduled to make an announcement on the government’s plan for school reopenings this week. If that plan fails to address the core issues at stake, we can be expecting more radical actions by parents and education workers and potentially safety strikes in September.

The inclusion of broader social demands like paid sick days for all, a ban on evictions, funding for public housing and additional funds to address systemic racism makes the fight for a #SafeSeptember a potentially powerful struggle for all workers and community members. In the days and weeks to come, it will be imperative to organize mass support for the calls put forward by the educator and parents groups and increase pressure on the government to meet the needs for a safe and well-funded return to schools. For more information and future events you can visit: