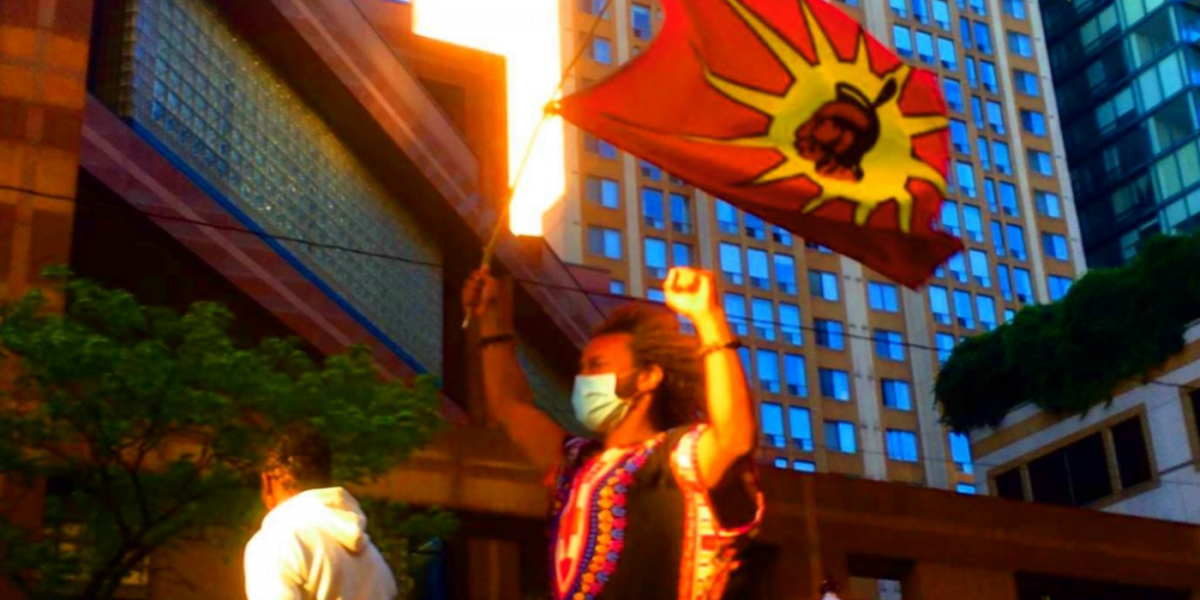 Toronto’s Christie Pits Park was the location of a six-hour riot in the summer of 1933, during the Great Depression and six months after Adolf Hitler took power in Germany. Two days before the riot, a group of Nazi sympathizers called the “Swastika Club” waved a swastika during a softball match where a local team compiled of mostly Jewish youth were playing. The Bloor-Harbord neighbourhood at that time mostly comprised of Jewish and Italian working-class families, many of whom formed an informal “gang” to resist the white supremacists. Soon the word spread that this incidence of hate was expected to repeat during the next match and the police were notified and asked to provide additional security. Then chief constable, Dennis Draper, close collaborator with Toronto’s political elite and known for breaking up leftist congregations, ignored the request and failed to protect the local Jewish youth when the Swastika Club returned with the intention of violence.

Almost a century after, on August 29, 2020, thousands of hopeful Torontonians convened at this spot to demand justice for all by defunding the police. Toronto Police Service (TPS) remains the same failure that it was during the Christie Pits riots. The police continue to be a tool for the ruling elite to uphold the status quo.

The Defund the Police rally organized by The Coalition for BIPOC Liberation was a historic one. The nationwide call to action saw protestors come out in Tkaronto/Toronto, Montreal, London, Calgary, Fredericton, Moncton, Ottawa. The march from Christie Pits in Toronto was led by #NotAnotherBlackLife, Forward Through Progress, and supported by SURJ Toronto. Earlier in the day, another procession led by AIR Collective and Forward Through Progress, took to Downsview Park to demand for defunding the police.

The nationwide protests erupted after the Special Investigations Unit (SIU) announced that the seven police officers present during the death of Regis Korchinski-Paquet, a Black-Indigenous woman, were cleared of all charges. Regis fell to her death under police supervision earlier in the summer. Her family had called for assistance while she was experiencing a mental health crisis which led to the police taking over.

The SIU’s decision highlights the police’s failure to recognize that mental health crises should be addressed by care professionals and crisis management units. In the case of Korchinski-Paquet, the report details how the presence of a cop with a sock gun may have agitated the situation further. SIU’s report mentions that there was no indication of overt racism while the same report notes, “There is evidence that Ms. Korchinski-Paquet attempted to court favour with the police at one point by informing them that her father was coming and he was ‘white.’”

What is evident from the above is that mental health is not taken seriously by the police, especially when it pertains to Black community members. This is not the first incidence when the police have appeared during a mental health crisis that ended up in a death. According to a 2018 investigation by CBC, around 70% of Canadians who were killed during police encounters since the year 2000, were facing mental health or substance abuse issues – and that rate has nearly doubled in the last twenty years.

Only a month after Korchinski-Paquet’s death, a 65-year old visible person of colour named Ejaz Choudry, was killed in Mississauga by Peel Regional Police during a wellness check. The whole incident was caught on a neighbour’s camera and family members reported that there were no de-escalation steps taken by the law enforcement officers onsite.

Choudry and Korchinski-Paquet’s are just two cases amongst many others who have faced the same fate in police custody. This attack on people’s mental and physical health by the police must stop.

CTV news did an investigation into the recent 100 deaths by police shootings and found that only one resulted in an officer being charged. 53 of those deaths cleared the officer of all charges and 47 remain under investigation.

Unsurprisingly, Black and Indigenous folks are disproportionately represented amongst the fatalities caused by police encounters, even when adjusted for population. Despite several racial bias training and police reforms, this remains the case – proving that police reforms do no good.

The Ontario Provincial Police (OPP) attacked Six Nations Land Defenders resisting the Mackenzie Meadows – a housing project that violates the sovereignty of the Haudenosaunee. The Coalition for BIPOC Liberation called for solidarity with Six Nations. One of the speakers at the Defund the Police rally, Angel, reminded protestors that, “before settler colonialism, there was no police,” and urged white allies to step up.

The Royal Canadian Mountain Police (RCMP),  the OPP, and the TPS are part of a racist and colonial surveillance and disciplining system.

The RCMP specifically was born out of Canada’s racist history of Indigenous genocide. Created by settler-colonial Canada’s founding Prime Minister, John A. McDonald, whose statue anti-colonial protesters toppled in Montreal, the RCMP played a crucial role in displacing Indigenous communities in order to free land for white settlers. They also separated Indigenous children from their families and sent them to residential schools.

A recent CBC investigative report shows that most police killings are caused by the RCMP, followed by the TPS. The disproportionate representation of Black and Indigenous folks amongst police murders today are an extension of the racist and colonial legacy of the Kanada/Canada’s police infrastructure. The recent case of RCMP patrolling Wet’suwet’en territories and the attack on Six Nations Land Defenders only solidify that claim.

The road to abolition

With a $1.076 billion budget, the TPS ranks as the second highest expense for the City of Toronto, after the TTC. But the question raised yesterday was why? The history of the TPS and the RCMP clearly demonstrate a mismanagement of public resources in creating an institution that is hostile towards its own public, especially Black, Indigenous, and People of Colour.

In June, following protests earlier in the summer, Toronto’s City Council saw a motion to decrease the police budget by 10% – which was ultimately voted down. In the same year that the provincial government announced budget cuts to the education sector, it seems ostentatious to legislate funding for an institution with a horrible track record for keeping communities safe. People, especially members of marginalized communities, are tired of being told that the police are here to protect them because the historical data shows otherwise. It is imperative that the City of Toronto redirects this funding into preventive, supportive, community-led programs that address issues of housing, access, mental and public health.

The organizers of yesterday’s Defund the Police rally put out a progressive list of demands that aim to create a holistic, equitable, society based on care and solidarity. The Coalition for BIPOC also demanded for the abolition of the carceral system. The group stressed that defunding is a means to abolishment of the police system which unfairly incriminates marginalized communities.

While many sceptics may suggest that abolishing the police is a radical idea, the number of people who turned out for the nationwide call shows the growing support for this movement. The time is ripe, and the onus is now on all of us to build a mass movement to make this vision a reality.