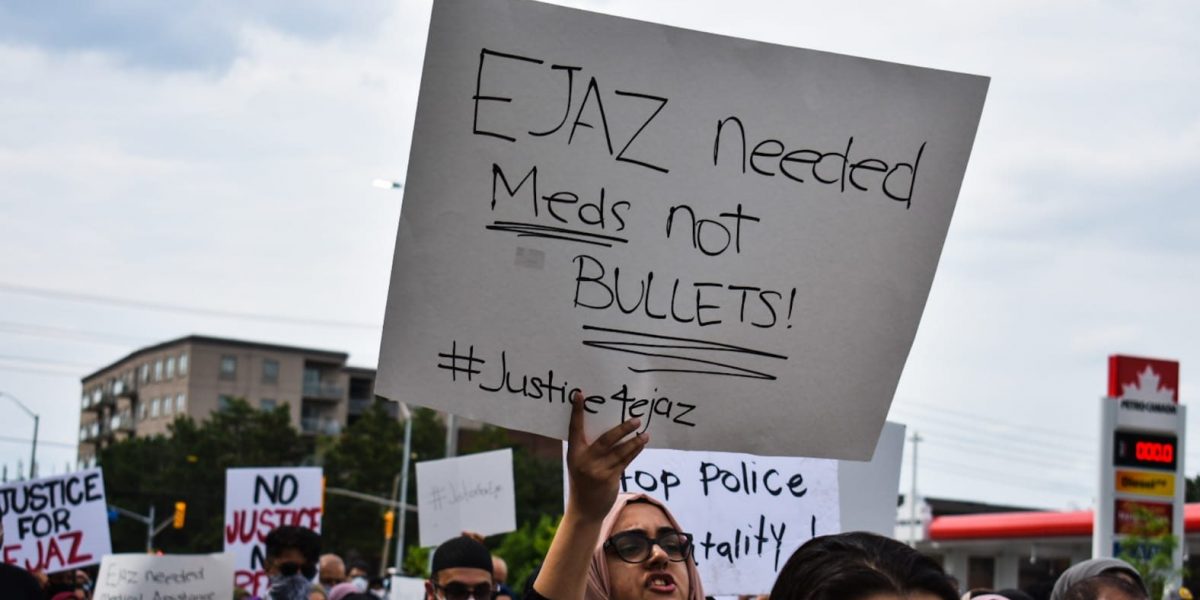 Ejaz Ahmed Choudry was gunned down by police around 8 pm on Saturday after police arrived to perform a “wellness check.” Family and community members have held the intersection at Morning Star and Goreway since the night of Sunday June 21 to demand Justice for Choudry.

Choudhry was 62 years old and lived with schizophrenia. On the night of his death, he asked his family to leave the apartment because he wasn’t feeling well. His family did not call the police but they did call the non-emergency hotline to seek paramedic support in having Choudry take his medication. Choudry did not have a gun or any weapons. He was going through an emotional crisis and held a small kitchen knife as he threatened to harm himself in the midst of his emotional crisis. Witnesses report that police made next to no attempts to deescalate the situation before they broke down his door and shot him within seconds. Choudry leaves behind four children, the youngest being seven years old.

In a video released online, police officers are recorded entering the second floor apartment by a ladder. They are seen breaking down the door and yelling at Choudry before opening fire on him within seconds.

Not an isolated incident

Mohammed Hashim of the Urban Alliance on Race Relations said, “This death isn’t an isolated incident. It’s linked to a long-standing practice of systemic racism. Since April nine Black, Indigenous, or racialized people have died in interactions with the police.”

Hashim explained that the Urban Alliance on Race Relations has been calling for the police to be demilitarized for the last twenty years.

“Nothing has changed in twenty years. People are getting killed over and over again. The fact is that the police as an institution is unable to deal with crises like the one that Mr Choudry went through,” Hashim added, “The Urban Alliance on Race Relations supports the call to defund the police. Mental health issues should not be dealt with by the police.”

Ejaz Choudry’s nephew, Muhammad Choudry, said, “This system is not meant for us. If you’re in a mental health crisis and you’re facing armed people with body armour instead of people who want to listen and show compassion. These killings have happened multiple times…many people have seen the videos online and we’re all upset because we can all see that it was a senseless killing. There was no attempt to help a 62-year-old man with schizophrenia. How many more killings do we need to have until there’s a change? It’s been the same story since day one.”

Following the press conference, community members began a protest from Goreway Drive at Derry Road in Malton up to the entrance of Highway 427. Approximately 20 outraged young people blocked the entrance to the highway before continuing with the march back to Goreway and Derry where the community has held the intersection for the last three nights.

La Tanya Grant’s cousin, Jermaine Carby was killed by Peel Police in 2014. She spoke to the community at the Justice for Ejaz rally. Her cousin was carded and then gunned down by the police while he was on the way to Burger King. The SIU cleared the police of any wrong-doing. But, she pursued her own private forensic inquest and has initiated a civil lawsuit against the Peel Police.

“I don’t understand how people with a gun can be fearful of an older man who is struggling with an emotional crisis. Why are the cops dealing with mental health issues? They have no training and they are completely unqualified,” Grant said. “Imagine we put the money of police budgets back into our communities.”