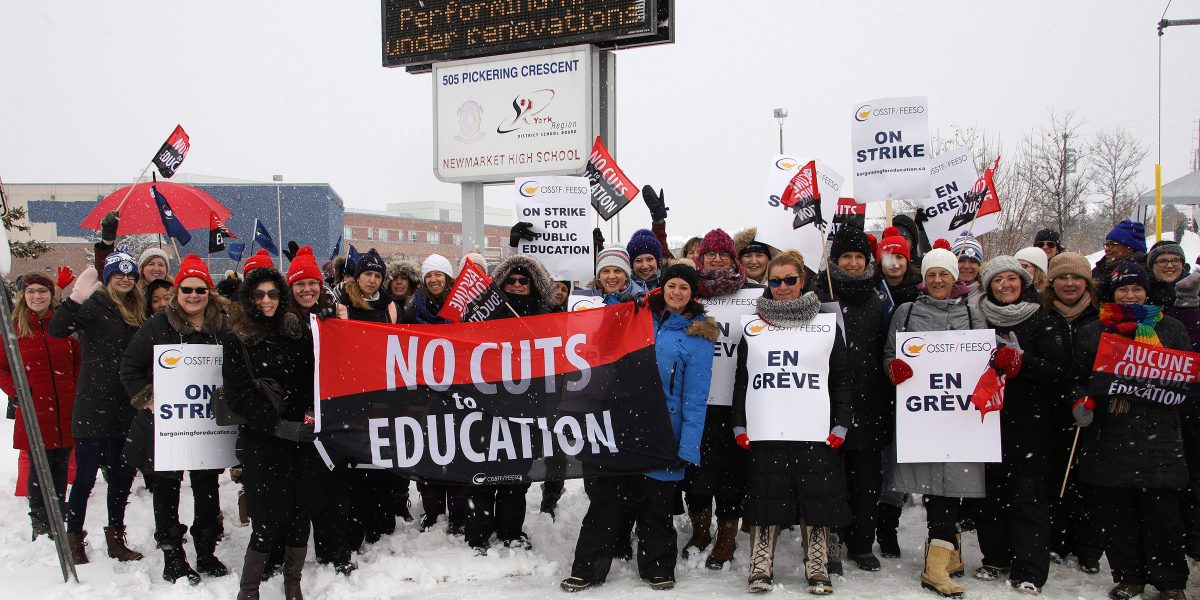 Next week, for the first time in over 20 years, Ontario will see four of its major education unions (ETFO, OSSTF, OECTA and AEFO) engaged in job actions ranging from work to rule campaigns to all out strikes. This will mean that about 200,000 teachers and education workers in the elementary, secondary, catholic and French-language schools will be withdrawing their work, either partially or fully, in opposition to the Ontario government’s cuts to the education sector and a number of damaging policies introduced over last year.

These strikes and job actions are the culmination of months of fruitless bargaining with the Ford government. While the government and its Minister of Education, Stephen Lecce, have continued to paint an imaginary picture of money hungry teachers’ unions, emphasizing that salary increases are the only source of conflict, the teachers have been loud and clear that this fight is way bigger than any compensation disagreements. For educators this is about defending public education and public services in the province.

In the midst of all the noise and the government propaganda it is easy to lose sight of what is at the core of this struggle. Over the course of the past year and a half, the Ford government has announced a number of devastating plans for the education sector. These include cuts to school boards’ funding, announced increases to class sizes at all levels, mandatory e-learning and online courses, and planned mass layoffs of teachers and support staff.

This past week a leaked “confidential” document from the Ministry of Education revealed the provincial government’s plan to make online learning mandatory for high school students while dramatically reducing funding for school boards. The document also made clear they intend to explore ways to generate revenue by selling Ontario’s online learning courses and platforms to other jurisdictions. If the government is able to implement its plans it would result in the defunding and privatizing of parts of our public school system. The results would be catastrophic, the removal of vital support for students would impact their learning conditions, and result in the loss of thousands of teaching positions at our schools.

Later in the week, in a desperate and transparent move, the Minister of Education announced that in the event of a strike, the government will be offering a childcare subsidy of up to $60 per day to all families with kids in elementary school. According to the government’s own announcement, this could cost the province up to $48 million a day. For comparison the cost for implementing support for students with special needs across the province (one of the asks of the elementary teachers’ union) is roughly $50-$80 million.

This clearly signals that the financial arguments made by the government to justify their cuts, are no more than a guise for an ideological attack on the province’s public services. They are willing to spend millions of dollars a day to ensure that they can break the unions, pave the way for further privatization and defunding of the sector and have their regressive policies remain intact. For the government this is not about the money, it is about attacking public education, no matter the cost.

Public support for the teachers’ fight

The last few years have also seen a mass movement of teachers across the United States and elsewhere in the world. The teachers’ fight for education has gained serious momentum and amassed popular support.

Last April, thousands of students, parents and education workers gathered at a massive rally at Queen’s Park, sending a clear message opposition to Ford’s proposed education cuts. That same month, more than 100,000 students also walked out of class at more than 600 schools across Ontario in protest.

Why is this an important moment to support teachers?

In this context, the teachers’ strikes are bigger than just a fight to protect our public education. They offer a momentous opportunity for Ontarians to push back against the entire neoliberal and anti-worker agenda of this government. And the Ford government knows this. That is why a victory for teachers in the face of a stubborn and determined government side, will only be possible through a broad mass mobilization of all workers in the province.

If the teachers win against this government’s onslaught on our public education, it will be a win for the entire working class, but if Ford is able to break the unions, it will be a big loss for all workers in Ontario.

In the coming weeks, the government will be doing everything in its power to run a propaganda-filled campaign against the education unions, trying to turn parents and students against them. They may even opt for back to work legislation when necessary. In fact, on Thursday, Ford himself told the media that the government will indeed be considering a back to work legislation if they cannot force the teachers into an agreement. This gives us a roadmap for how best to support the teachers’ fight in the days ahead.

With all four education unions now taking job action, the teachers’ fight is gaining momentum and the pressure on the government is increasing. But the stakes are high on both sides and the Ford government is not going to concede easily. The unions’ strategy of rotating and one day strikes is making it more difficult for the government to order them back to work immediately, and allowing them to widen their network of support.

However, to win this fight, the teachers are likely going to need to escalate their actions and engage in an all-out full strike. And that is why it is imperative for us to rally around the education workers, mobilize mass support and build their confidence. The education unions have done a remarkable job in organizing their members and their strike vote records clearly demonstrate that. It is now time for all Ontarians to stand behind the teachers in the province and give them the support they need to win this fight for all of us.

How to support the teachers

Starting on Monday January 20 there will be strike actions across the different school boards in the province. To show your support for the teachers: