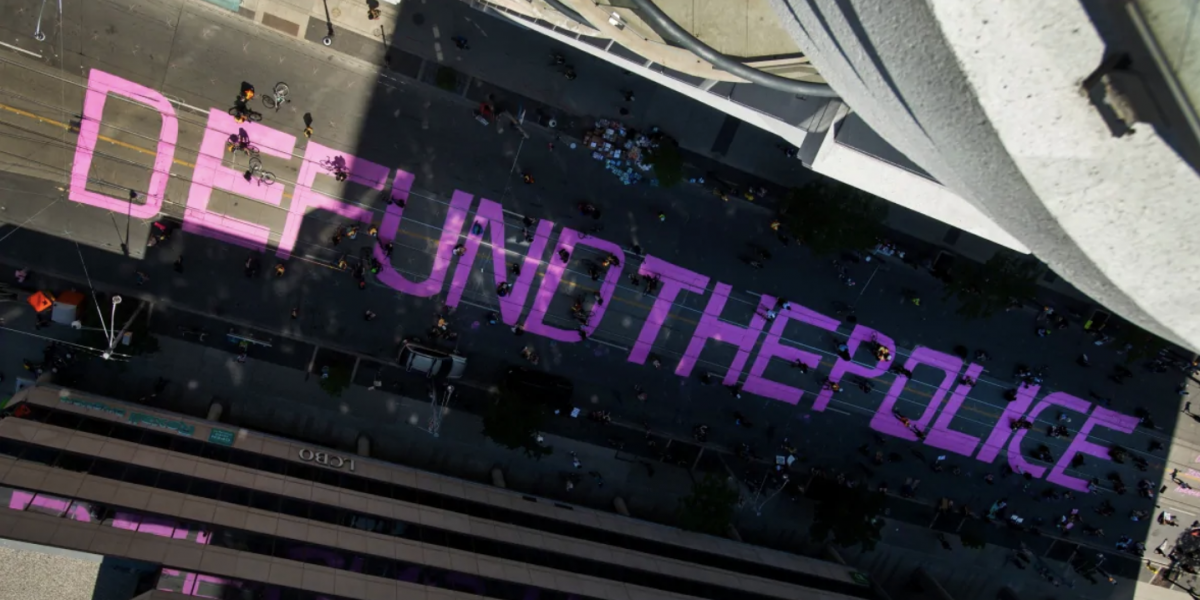 Across Turtle Island, uprisings against police violence have given power to calls to defund and abolish the police. No longer able to sweep police conduct under the rug, politicians have been scrambling to respond.

On June 7, Minneapolis City Council promised to disband their police department. The very next day, Toronto Police Chief Mark Saunders announced his resignation. Not wanting to be left behind, Toronto city councillors Josh Matlow and Kristyn Wong-Tam announced a motion to cut the Toronto Police Service’s budget by ten percent, or $122 million of the $1.22 billion police budget.

On June 19, Black Lives Matter Toronto (BLM-TO) responded to the proposal, with cofounder Rodney Diverlus calling ten percent an “unacceptable” number “meant to placate the public.” Among a list of demands, the organization called for an immediate police budget cut of at least 50 percent. City Council’s proposed ten percent cut falls short when you consider that the call to “defund the police” is rooted in the abolitionist movement’s efforts to end the institution of policing, efforts that BLM-TO put at the heart of their vision in a way that Matlow and Wong-Tam do not. On the heels of Minneapolis disbanding their police department, ten percent looks even smaller. But in the context of Toronto’s history of runaway police spending, the proposed cut looks infinitesimal – not just as an end goal, but even as a first step. To understand the meager impact of the proposed motion we must understand the recent history of police funding in Toronto and why ten percent is not enough.

Police Funding after ‘The Year of the Gun‘

2005 was Toronto’s original ‘Year of the Gun‘ a year that saw fifty-two gun-related homicides and widespread media discussion about violence in the city. Instead of addressing the systemic roots of violence, the city responded by throwing money at the police to target, criminalize, and incarcerate oppressed communities. The Toronto Police boasted a greatly expanded “Guns and Gangs” task force heading into 2006 and made much ado of their “Community Policing” and “Community Safety and Security” goals in their budget outline. City Council rewarded them with a whopping $74.72 million increase in funding, bringing their gross expenditure budget allotment to $796 million for the year 2006.

What any of the city’s public services could have done with an extra $74.72 million is an open question. But before you start dreaming, the numbers get worse.

For the first time in Toronto’s history, the 2012 municipal budget saw City Council approve over a billion dollars in gross expenditures for the police, officially clocking in at $1.01 billion. That same year, funding for Paramedic Services, Public Health, and the Toronto Public Library each fell by several million. Funding for the city’s Shelter, Support & Housing portfolio fell by over $130 million (more than the $122 million cut being proposed now).

When you think about those numbers – a billion dollars for police and a $130 million cut for housing – it’s important to remember that 2012 also saw a five-year high in street deaths of underhoused people in Toronto. Even when the city and the police aren’t killing people through their actions, they are killing people by diverting resources away from crucial support systems.The police budget hasn’t gone under a billion dollars since then. Toronto City Council has continued pumping money into policing at a rate that outstrips almost every other public service. 2014 and 2015 came with increases to the police budget totalling $130 million. Following two consecutive years of cuts in 2016 and 2017 (for a total cut of $21 million), the last three years have seen a total increase of roughly $92 million for the police. This brings us to today’s number: $1.22 billion for the police in gross expenditures, a total increase of nearly $500 million for Toronto’s cops since 2005 (which, accounting for inflation, is roughly $300 million over the 2005 funding rate).

10 percent is not enough

In light of these numbers, how should we understand the proposed ten percent cut? How can we understand a cut of ten percent when the police killings of Ejaz Choudry (June 20 in Toronto), Regis Korchinski-Paquet (May 27 in Toronto), Chantel Moore (June 4 in Edmundston, New Brunswick), and Rodney Levi (June 12 in Boom Road, New Brunswick) are still fresh in our minds?

To start at the end, every cent that goes to funding the police is an investment in state-sanctioned violence, enacted primarily against Black, Brown, and Indigenous people. As abolitionists have made absolutely clear in past decades and the last weeks, nothing short of a principled commitment to complete defunding and abolition will solve the problem of policing. A ten percent cut wouldn’t have spared the countless people in Toronto brutalized and murdered by police power, and it won’t do anything now.

But even as step one of a much longer defunding process, ten percent is like throwing a deck chair off the Titanic. Police spending went up by over $40 million last year, and at that rate, the proposed $122 million cut would be replenished in three years. When you consider that previous increases have been over $60 million and even $70 million, ten percent looks smaller and smaller.

The call to defund the police in Toronto must come with a vision of a world where we don’t need any police funding. If that seems impossible now, ask yourself if an extra $610 million (50 percent of the police budget, as BLM-TO demands) for resources and supports makes it seem more possible. The proposed $122 million could sure be used by Toronto’s underfunded social programs, but so would the other $1.098 billion that the police would have left over after the cut. In the face of police violence, justice requires much more than what Josh Matlow and Kristyn Wong-Tam are proposing. We must imagine a world where everybody is supported and police and prisons are unnecessary. As BLM-TO makes clear, we must fight for that world today – starting at 50 percent, and onward until the police are disarmed, dismantled, and abolished.