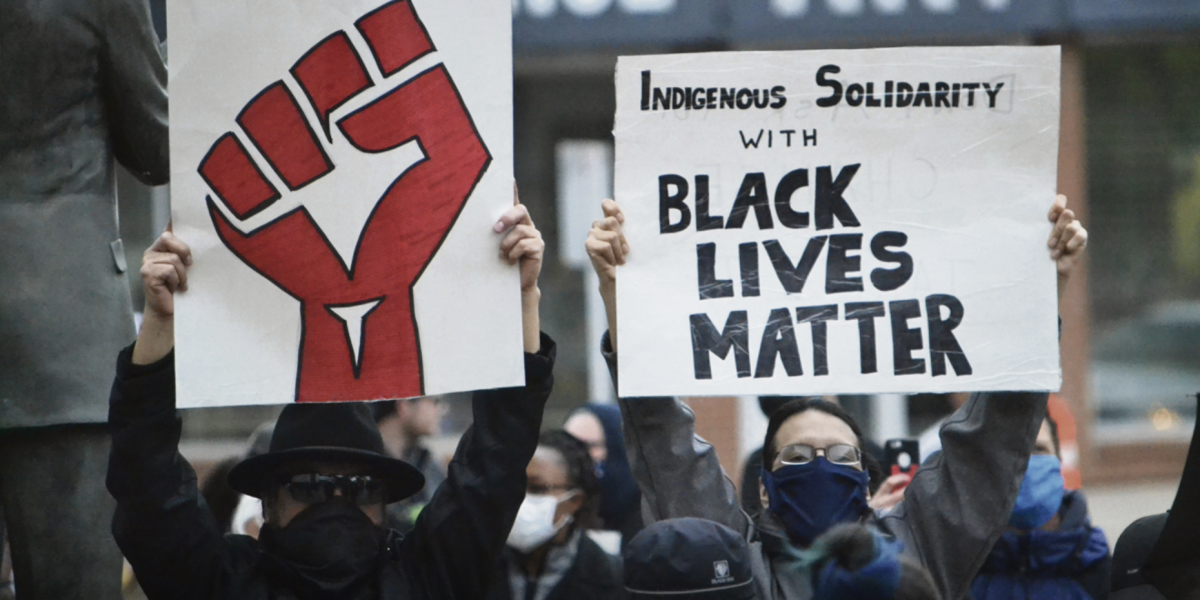 Black and Indigenous people have higher rates of distrust for policing and corrections, the armed domestic wings of the state, underscoring a sense of civic estrangement in their communities. York University’s Institute of Social Research conducted a survey on perceptions of policing by Canadians in 2018. The survey found that over 60% of white, South Asian, and Middle Eastern respondents agreed that they “trust the police”. In contrast, for the survey’s telephone respondents, only 33.5% of Black Canadians and 38.3% of Indigenous peoples agreed that they “trust the police”; for the online survey’s respondents, the rate was 29.7% and 44.8% for Black and Indigenous peoples respectively. Black and Indigenous peoples were found to be less likely to “strongly agree” that they have “confidence in the police”, “a lot of respect for the police”, or “would go to the police for help if they have a problem”. While only 31.7% of white respondents agreed that the police “abuse their powers”, 61.3% of Black and 45.9% of other non-white correspondents agreed. These viewpoints are likely to shift among white and Asian populations; in the wake of the deaths of Regis Korchinski-Paquet and George Floyd, the mass turnout to protests across Canada and the US suggests that activism and community organizing can bring about shifts in public opinion, policy, and conduct as debates about racism and police defunding become mainstream.

Police brutality by the numbers

Indigenous peoples and Black Canadians face a disproportionately high level of police brutality. In urban areas, the pressure is on Black Canadians, while in rural areas it is on Indigenous peoples. A dataset compiled by the CBC on lethal incidents between Canadian police and civilians found that the RCMP has the highest rate of fatal shooting incidents amongst policing organizations, more than double that of the following organization, the Toronto Police Service. According to analysis done by the CBC, more than 70% of victims had histories of mental health issues and substance abuse.

The RCMP largely serves rural areas and has high contact with Indigenous peoples; over 67% of RCMP detachments are deployed in Indigenous communities. Between 2007 and 2017, RCMP officers fatally short 61 people, 22 of whom were Indigenous. 20% of these shootings were on-reserve (the areas Inuit communities inhabit are not considered reserves). Many shootings off-reserve took place in Northern Canada and British Columbia. A CBC investigation found that law enforcement agencies have higher rates of fatal shootings in western Canada than eastern Canada. Although Indigenous peoples are only 10.6% of Winnipeg’s population, they were nearly two-thirds of victims of fatal shootings by police between 2000 and 2017.

Though 71% of police-related fatalities involved gunshots, there have been other instances of police brutality which suggest a culture of impunity and racism against Indigenous peoples. Infamously, the Saskatoon Police Services in the early 2000s caused the deaths of Indigenous peoples by arresting them for disorderly conduct, driving them out of the city at night in the wintertime, and abandoning them so that they may freeze to death. No officer has been convicted specifically for this practice, though there have been some convicted for related offenses. Along British Columbia’s “Highway of Tears”, there have been numerous allegations that members of the RCMP have sexually assaulted Indigenous women.

Accurate information about police brutality can be difficult to come by. There is no official recording of the number of police-related civilian fatalities, and police departments do not consistently maintain and release statistics about the use of force. This data frequently does not record the race and ethnicity of victims. After examining a data set for fatal shootings involving the Canadian police, criminologist Scott Wortley in 2017 called for police forces to document and publish statistics on the use-of-force. Wortley noted in his examination of police-related civilian fatalities that “there seems to be a lot of what might be called ‘suicide-by-cop’ situations”, referring to a suicidal method where individuals provoke a lethal response in police through erratic, threatening behavior. Wortley’s observations uncomfortably mirror the alleged cover-up of the death of Regis Korchinski-Paquet; witnesses claim that Korchinski-Paquet was murdered by the police, who had initially claimed that she died by suicide.

Incarceration by the numbers

When considering the impact of criminalization on youth, it is important to keep in mind the phenomenon of recidivism, the likelihood of re-entry into the criminal justice system. Recidivism rates are higher amongst Indigenous peoples; the rate is 70% in the Prairie region. Acquiring a criminal record produces another barrier to employment, credit, housing, and other features of decent life, increasing the likelihood of a life of hardship. In many disenfranchised communities, the primary and predominant mode of contact with the state is through policing and corrections. Government budgets and state capacity are deployed in ways that entrench anti-Black racism, settler colonialism and inequality. In Canada, racism and colonialism are systemic, the numbers don’t lie.