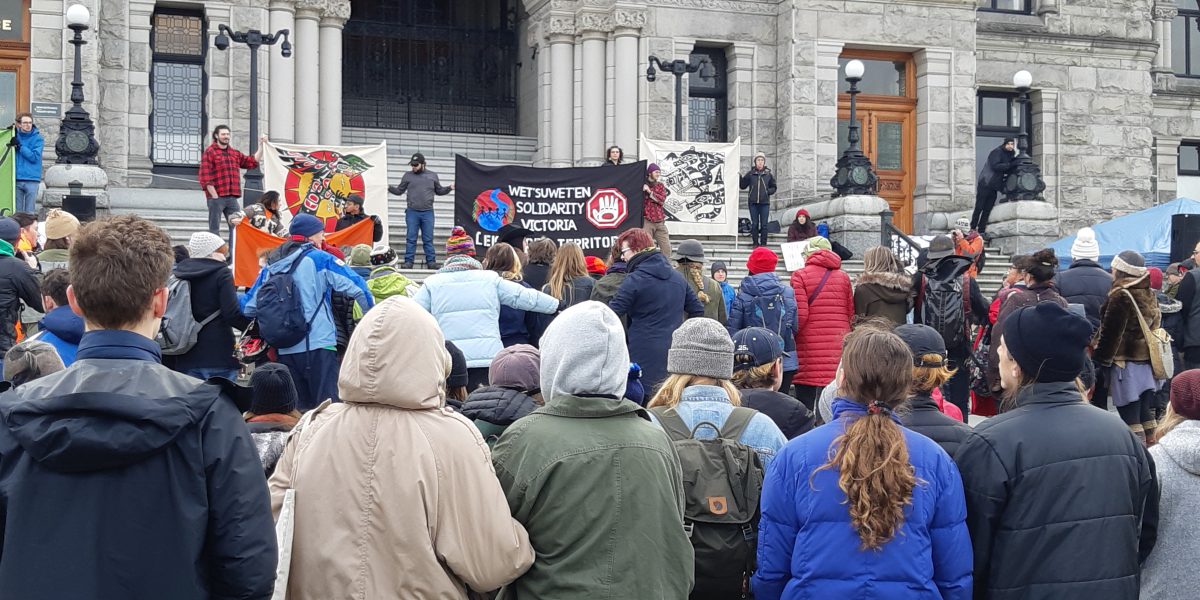 Thousands of activists and community members rallied across Canada on January 11 to voice their support and solidarity with the Wet’suwet’en and the Unist’ot’en camp. Two days later, the RCMP set up a new “exclusion zone,” an occupied blockade preventing media, as well as supplies and food from reaching the territory on the 27km mark on a forestry road.

Those wanting to pass through this zone can only do so with the permission of the RCMP’s operations commander. The last time this zone was put in place, the result was the self-authorized use of violence against unarmed community members. These occupations go against a 1997 court case in which the Supreme Court of Canada came to “…the conclusion that the content of aboriginal title [of the territory] can be summarized by two propositions: first, that aboriginal title encompasses the right to exclusive use and occupation of the land held pursuant to that title for a variety of purposes, which need not be aspects of those aboriginal practices, customs and traditions which are integral to distinctive aboriginal cultures.” And secondly, “that those protected uses must not be irreconcilable with the nature of the group’s attachment to that land.”

In a statement made the same day as the RCMP invasion, BC NDP Premier John Horgan stated that “A natural gas pipeline across northern British Columbia is vital to the region’s economic future and it will be built despite the objections of the hereditary chiefs of the Wet’suwet’en Nation…This project is proceeding and the rule of law needs to prevail in B.C. ” It seems a bit strange as to which laws Horgan is referring to, as the Supreme Court of Canada, Wet’suwet’en law, and the supposedly adopted UNDRIP conventions would say otherwise. Moreover, The Wet’suwet’en delivered an eviction notice to Coastal Gas Link (CGL) under Wet’suwet’en law of trespass. Despite UNDRIP asserting that Indigenous Peoples have the right to self-determination, meaning they determine the political status and pursuit of economic, social and cultural development and requiring government to obtain “free and informed” consent for development, Horgan still says that “the courts have confirmed that the project can proceed and will proceed,” and that UNDRIP does not apply in the case of CGL.

The pipeline is planned to span nearly 700 km, from Dawson Creek to Kitimat, with an estimated cost of $6.6 billion. Despite ongoing protests and delays, TC Energy Corp stated on December 11 that “The first segments of pipe for Coastal GasLink arrived at storage sites in Kitimat and Chetwynd last week in anticipation of construction ramp up later next year. Deliveries to other areas across the project route will continue through April 2021 by vessel, rail or truck, until it’s needed for assembly and installation. That phase of construction is expected to start next summer and continue through to 2022.”

The Wet’suwet’en Hereditary Chiefs have called on the United Nations to monitor RCMP, government and CGL actions on their territory, based on a recent directive from the UN Committee on Racial Discrimination to halt construction and withdraw RCMP from the territory in order to avoid further violations of Wet’suwet’en, constitutional, and international law. There are also lots of ways that activists and community members can show solitary and support and get directly involved. There is a wishlist / needs list of goods that is needed at the camp, and methods to donate to both the camp and legal funds. You can also call your relevant minister to voice your concern. There are also solidarity groups and actions being carried out all over Canada. Look into hashtags such as #wetsuwetenstrong and check out other blog or community sites for possible actions in your area. You can also contact the office of John Horgan directly at:

No consent, no pipeline!