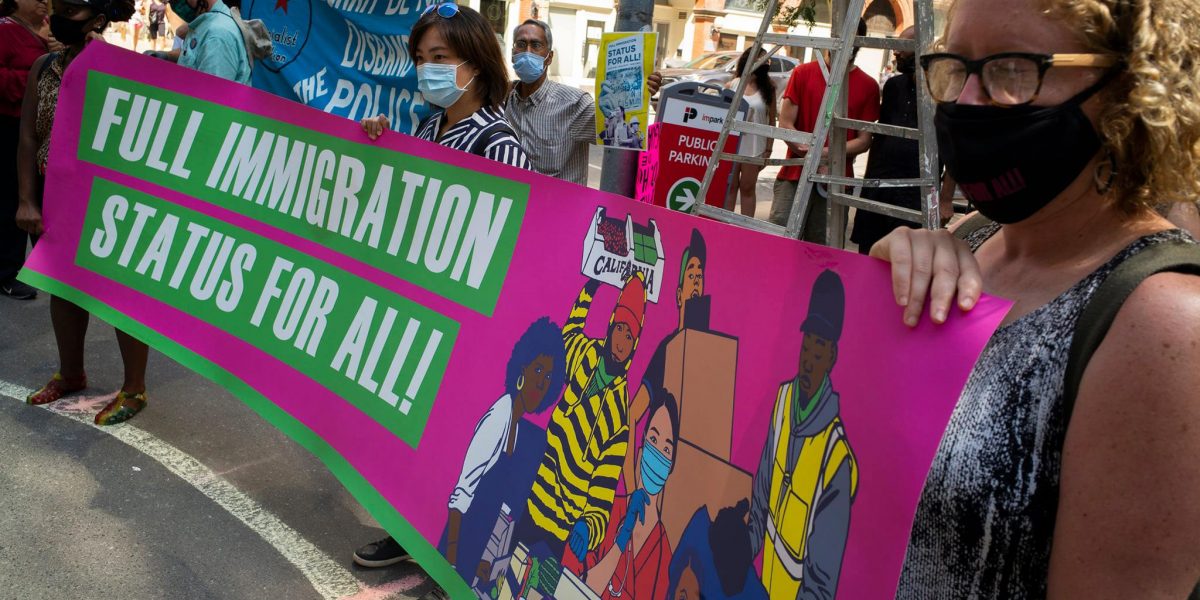 On August 23, over one hundred migrants, refugees, undocumented people, workers and students installed a human clock outside Immigration Offices at 74 Victoria Street in Toronto to say that “time is up” and call for urgent action for full and permanent immigration status for all. Migrants are responding to the prorogation of parliament, calling for a regularization plan in the upcoming throne speech.

Syed Hussan of the Migrant Workers Alliance for Change told the rally, “We’re joining forces across the country in ten cities and six provinces. Here in Toronto there are a lot of people starving without CERB. This is a national issue around migrant rights so it deserves national attention. We’re in front of the immigration offices in downtown Toronto and we’re going to put up a clock and say the time for action is now for full immigration status for all. It’s the only solution to address COVID-19.”

Simultaneous actions took place in Montreal, Niagara, Vancouver, Regina, Sherbrooke, Windsor, Halifax, Okanagan, and Ottawa to call for expansion of the newly announced pathway to permanent residency for some refugees in healthcare to include everyone in the country without permanent resident status.

At least 1 in 23 people in Canada (over 1.6 million) are non-permanent residents, and many are separated from their families and excluded from universal healthcare, access to emergency income supports, and decent work. Hundreds of thousands of migrant workers, refugees, students and undocumented people have lost their lives and livelihoods in COVID-19. Migrants are unable to fully protect themselves during COVID-19 because of lack of emergency support, and because speaking out about unsafe work and housing conditions can result in deportation, homelessness, or not being able to return.

The federal government announced a “pathway to permanent residency for some asylum claimants working in the health-care sector during the COVID-19 pandemic” on August 14. However, COVID-19 does not differentiate between people, neither should the government response. Nearly 12,000 people have signed a petition calling for permanent immigration status for all.

Anna Martinez is a refugee from Mexico who is currently involved with the organization Vivimos Juntxs, Comemos Juntsx (We live together, we eat together). She came to Canada with her husband and children in early 2017 seeking protection from the Mexican government. Martinez and her family were denied status.

“Two weeks ago the government announced a status program but only for some refugees but this needs to be for all people regardless of how we came or where we came from,” said Martinez. “The only way that everyone can be truly protected in Canada is if we are granted permanent status now. We are here to stay. We need status for everyone now.”

Martinez told the rally in Spanish, “Today I can no longer be silent. When I was silent nothing happened. We have to continue fighting so we all have a safe and dignified life. If I can do something as small as using my voice I will. I will do it for my family and the families of others.”

Alina Przybyl from Migrant Students United explained the challenges they and other international students face. Przybyl noted the unstable job market makes it hard to get a full-time permanent job to qualify for permanent resident status and to get healthcare.

As international students everything we do is temporary whether it’s studying or working. We invest everything we have to get a future here but there is no protection or support because of our status,” explained Przybal.

“We know what we need and there’s no other solution other than getting permanent status. It’s time that our demands are met,” said Przybyl. “We are students whose fees pay for Canadian post-secondary education. We are essential workers. It’s time for Canada to recognize us and grant permanent status for all the migrants.”

Gabriel Flores, a migrant farm worker with the Migrant Workers Alliance for Change, spoke out against his conditions and was fired. As Flores told the rally:

“The employers have too much power against their workers and this makes it possible that we can’t defend ourselves even with the biggest COVID-19 outbreak in Ontario and we didn’t have personal protective equipment. The first time they assigned me to a house that I know is not appropriate for workers. I came here for eight months and was pressured a lot at work. They treat us really badly and that’s why I gave anonymous testimony to the media at first. The bosses didn’t give one of our infected workers help in enough time. So I talked to the person in charge and he said he had to talk to the owner to give an explanation of what happened and that I should be responsible for the immigrant worker. But I said the employer should be worried all the more for workers because of Covid.”

“The next day the owner came to me and said another worker had been approached for a media interview. He fired me immediately and ordered me to take my things and said they were going to deport me to Mexico. At this moment I had only two options: one to go back to Mexico and keep hiding what was going on in the farm. And the other one was to stay here and show what is actually happening in all the farms.”

Mike, a former immigration detainee and part of No One Is Illegal (Toronto) said, “I was detained and faced deportation. During that time I met a lot of other people in my situation. Our community as a whole is unsafe. When some people are treated unfairly it makes the whole system unstable.”

Global Solidarity against the 1%

Marisol Babadilla, a former “temporary foreign worker” now with Migrante-Ontario, described how the global capitalist system forces workers like themselves to seek employment in other countries.

“Like many Filipino workers I was forced to live and find greener pastures in other lands like here in Canada because imperialism against our country furthers poverty and increases unemployment,” said Babadilla. “We are abused by employers and recruitment agencies. We are afraid to complain because if we lose our job we lose a better life for our families.”

All those at the rally described how the Canadian state and employers have been abusing and exploiting migrant workers, students and refugees. Migrant communities are made vulnerable by government policy, but migrants are also leading the way to fight for the status for all. This is what the power of working class solidarity is all about.

As Flores noted, “I spoke out against being fired so that other people could speak out. It’s very hard to live in this situation but I am here fighting for everyone’s rights so that everyone gets permanent residency now.”