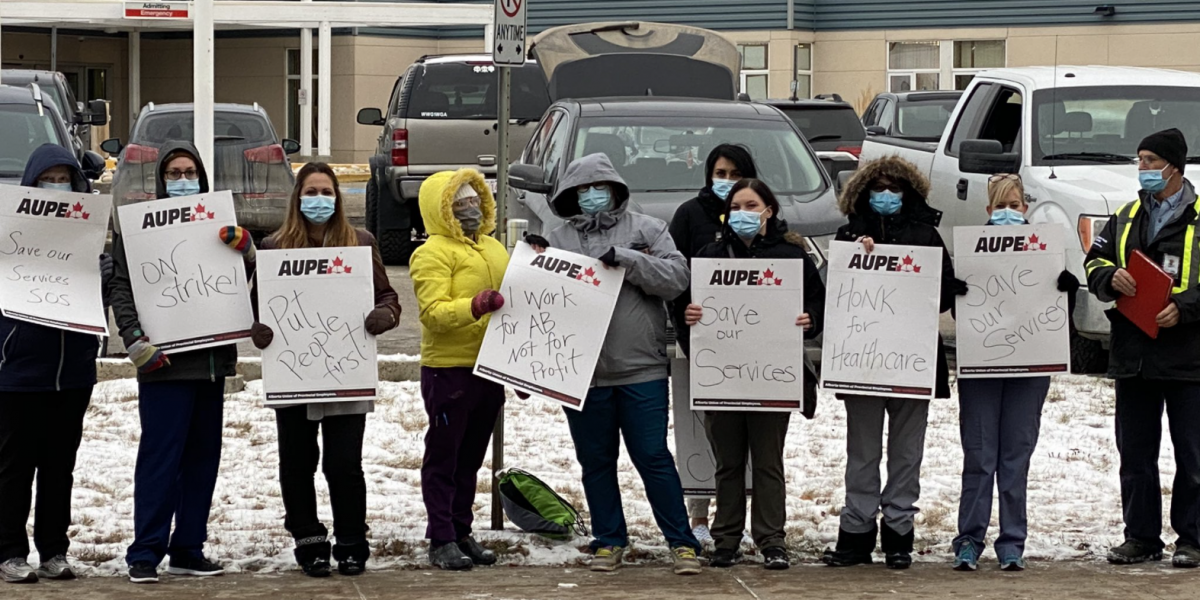 Today, October 26 2020, hundreds of members of the Alberta Union of Public Employees (AUPE) walked off the job to protest ongoing attacks on health care by Jason Kenney’s government.

The key issues include job security against outsourcing, addressing short-staffing, and stopping the privatization of public healthcare.

On October 23, Alberta Health Services opened a Request for Proposals (RFP) from private companies to take over laundry services.

As of publication, there are strikes at over two dozen workplaces across the province, including major hospitals in Edmonton and Calgary, as well as smaller regional and rural hospitals and medical centres. A list of strike locations is at the bottom of this article.

“Nursing-care and support workers decided today that there was no other option but to fight to protect Albertans at risk, especially during the deadliest pandemic in a century. By constantly short-staffing public health care, this government is pushing our members to the breaking point exactly when Albertans need them most,” said AUPE President Guy Smith in a statement.

“Across this province, working people are rising up against Jason Kenney’s job-killing policies and are joining the fight in solidarity. This was a decision taken by the members themselves. AUPE is a democratic union and we respect the wishes of our members.”

To no one’s surprise, Jason Kenney is breaking the 2019 “Public Health Guarantee” that  promised to maintain health-care funding and “a universally accessible, publicly funded health-care system.”

Since the mid-1980s, healthcare in Alberta has become one of the biggest targets for privatization and cuts. Kenney and the United Conservative Party want to carry on this legacy.

As early as April 2021, the UCP government plans on cutting 800 clinical jobs (nursing care and physician positions) and contracting out close to 10,000 general support services positions to the private sector.

In 1995 Calgary’s hospital laundry workers went on an 11-day strike to stop job outsourcing, after taking a 28 percent pay cut in 1993 in exchange for job security.

In 2012, AUPE members went out on a one day wildcat at the Royal Alexandra Hospital following a breakdown in negotiations. 800 workers in more than 20 centres across the province walked out, and managers soon started performing duties like meal delivery, portering and room cleaning.

AUPE leadership indicated that there is no timeline for how long the current “wildcat” strike will last.

It is clear that healthcare workers in Alberta have reached a breaking point, and now they’re determined to do something about it.

To support AUPE striking workers, head down to a picket line locations (you can find them courtesy of Progress Alberta), and follow AUPE’s news updates.

This article was originally published by RankandFile.ca