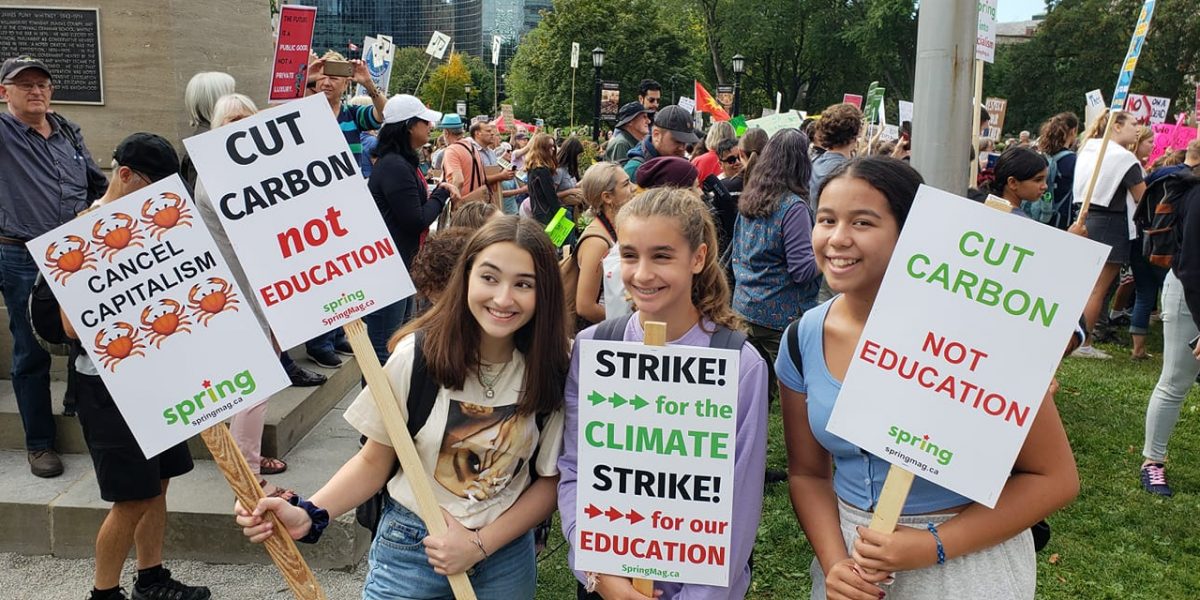 By any measure 2019 has been a historic year in terms of uprisings and revolts around the world. The massive wave of protests that have swept across the globe over the last 12 months include Sudan, Haiti, Puerto Rico, Argentina, Chile, Ecuador, Hong Kong, Lebanon, Algeria, Columbia, Egypt, Iran, Iraq, Catalonia, France, Czech Republic, Indonesia, and India just to name a few. Each national protest movement is motivated by particular concrete political and economic conditions, but undergirding these protests are grievances with neoliberal economic and political policies, which increase inequality, political corruption and state repression. Added to that is the unwillingness of capitalist states to address the climate crisis, which is the driving force behind the global wave of climate protests and strikes.

In the United States an open socialist, Bernie Sanders, is vying for the Democratic Party nomination for President. The Democratic Socialists of America has seen its membership rise above 60,000, including members elected to local, state and federal office. This is happening in the context of a renewed upsurge in labour militancy, especially amongst teachers.

As the 2010s come to an end and the 2020s begin it is clear the global left is entering a new period of struggle. The stability of the capitalist system is no longer common sense. This is likely to intensify with the worsening climate crisis and ongoing period of relatively stagnant capitalist growth and profit rates.

So what is the left to do?

The left must be clear about the scope of the problem. The climate crisis, the rise of the reactionary right and rampant inequality are not aberrations. They are not something that can be solved by a kinder more gentler form of capitalism. The drive for more profits breeds a cruel world of racism, sexism, exploitation and climate chaos. The problem is capitalism, built on colonization and slavery and sustained through multiple forms of oppression.

These systemic problems can’t simply be reformed away. We must fight for a political and economic alternative, socialism: the liberation of humanity from oppression and exploitation, where democratic and collective ownership of society prevails. Socialism can’t be gifted to us from on high, it has to be asserted by regular people from below–both to change society and through the process to change ourselves. As Marx wrote long ago, “revolution is necessary, therefore, not only because the ruling class cannot be overthrown in any other way, but also because the class overthrowing it can only in a revolution succeed in ridding itself of all the muck of ages and become fitted to found society anew.”

The project of socialism is really the process of mass social transformation. It is not a passive process, but an active and revolutionary one. We can’t wait around for politicians to deliver socialism, we have to involve the widest number of people in the fight for a more just planet.

That is why social movements are so important. They fight for reforms, sometimes quite radical reforms, and involve people whose ideas beyond the immediate demand are mixed and uneven. The socialist bet is that people’s ideas change, first and foremost, through struggle. The direct experience of political and economic struggles allows people the greatest opportunity to challenge and change the dominant ideas we have been fed by the ruling class and upend what we think is and isn’t possible.

Movements matter, but unfortunately we cannot challenge capitalism through movements alone. The fight for reforms, inside and outside the workplace, helps reach and activate larger sections of the working class. But capitalism can’t be dismantled through piecemeal changes. Capitalists have a vested interest in their profits and riches, they will fight back by whatever means necessary.

One needs to look no further than the UK and Bolivia to see the lengths capitalists will go to assert their power and destroy their class enemies. In Bolivia, the far-right and the capitalists, backed by the US, Canada and other western powers, saw an opportunity to overthrow the democratically elected government, using the power of the police and army to deal a blow to workers and Indigenous peoples in Bolivia. The results have been catastrophic: trade unionists and Indigenous activists have had their homes burned, been physically assaulted and even killed. In the UK the left movement around Jermey Corbyn was for years subjected to an unrelenting slanderous media campaign, while large sections of his own party worked to undermine his position because he was viewed as too radical. The Corbyn project was crucified and gutted before he was even able to form government. Capitalists and the capitalist state will never be passive when their profits are threatened.

Why join a socialist organization?

* memory of the class. Organizations help to preserve and transmit the ideas and lessons from past struggles. Starting from square one each time we begin a social movement or workplace struggle makes it harder for workers to be effective.

* connect struggles. More than simply providing historical context or knowing what people have done before, socialist organizations help us understand and link together sometimes isolated struggles. Whereas movements are limited in their focus, building a broad base around narrow demands, socialist organizations aim to paint a totalizing picture of the system of oppression and exploitation that is capitalism. And just as capitalism extends beyond national borders, so too does a socialist worldview, aiming to understand and learn from movements around the world–for example learning lessons from Egypt that help in Sudan. A socialist perspective might allow us to see links between movements, but it is socialist organization that can actually give us a mechanism to forge and act upon them.

* learn from struggles. Socialist organizations are sometimes understood as isolated and inward focused groups that aim to preserve socialist ideas, much like pickled vegetables, to be used at a future date. But like pickled vegetables, socialist ideas divorced from engaged political action have a limited shelf life. Ideas from the past are helpful, even essential, to understanding capitalism and figuring out a socialist strategy, but they can not act as a road map for the concrete political questions before us. The goal of a socialist organization is to constantly be learning from the movements, not acting as if we always know best and our role is simply to hand people the correct ideas. We seek to refresh our ideas and traditions–like learning from Indigenous socialists past and present and learning by constantly being involved in working class struggles. People’s ideas about the world are uneven, and this goes for people inside and outside socialist organization. Socialists have much to contribute in the project of fighting for a better world, but we also have much to learn.

* build leadership. Some on the left are averse to the notion of leadership. This is understandable if we think of leadership simply as a means of directing other people’s work. But that is not socialist leadership. Socialists aim not to inculcate the individual capitalist model of leadership, but to build a collective understanding of leadership–like the Fight for $15 and Fairness. This is a leadership that aims to raise the confidence and capacity of people, to build leadership in them. This means providing avenues for education and action. It means doing the day-to-day work, not directing it. It means building real credibility in the movements that we are part of. It is not enough to have good ideas, it also matters who says them and who hears them. It also means listening and being thoughtful and allowing other people space to develop their politics and practice. It is an art, and like all art it must be practiced.

* practice democracy. Building the political strength to win reforms, let alone revolution, is messy. There are constant debates on the left over politics, priorities, strategy, tactics and principles. Often the terms of these debates can be unclear and the conduct of them unbecoming. This stems, in part, from the deeply undemocratic and oppressive society we live in. Outside of movements and unions there is almost no avenue for most people to regularly practice politics. Being in a socialist organization gives people the experience to talk through, debate and most importantly act on politics. It can help us level up our skills to articulate our ideas, our discipline, and patience. An organization allows for some division of labour to help avoid burnout (you can’t attend every meeting), while also fostering trust. Being part of an organization allows us to practice democracy, in a way that makes us more thoughtful and accountable organizers.

Get involved with Spring

The corporations, the capitalists state, the right wing are all organized. They are constantly learning and honing their methods. We can not wish them away, we have to defeat them and that means upending the system they have built. This will require mass movements, but it will also require socialists who are organized, who work together democratically, and who have clear socialist ideas about how we can make social change.

The world is literally burning, and the question before us is, what will emerge from the ashes? We will hope and fight for a world free from all colonialism, oppression, exploitation and indignity. We hope if you want that world you will join Spring in fighting for it.

Email Spring Magazine at info@springmag.ca if you want to get involved.