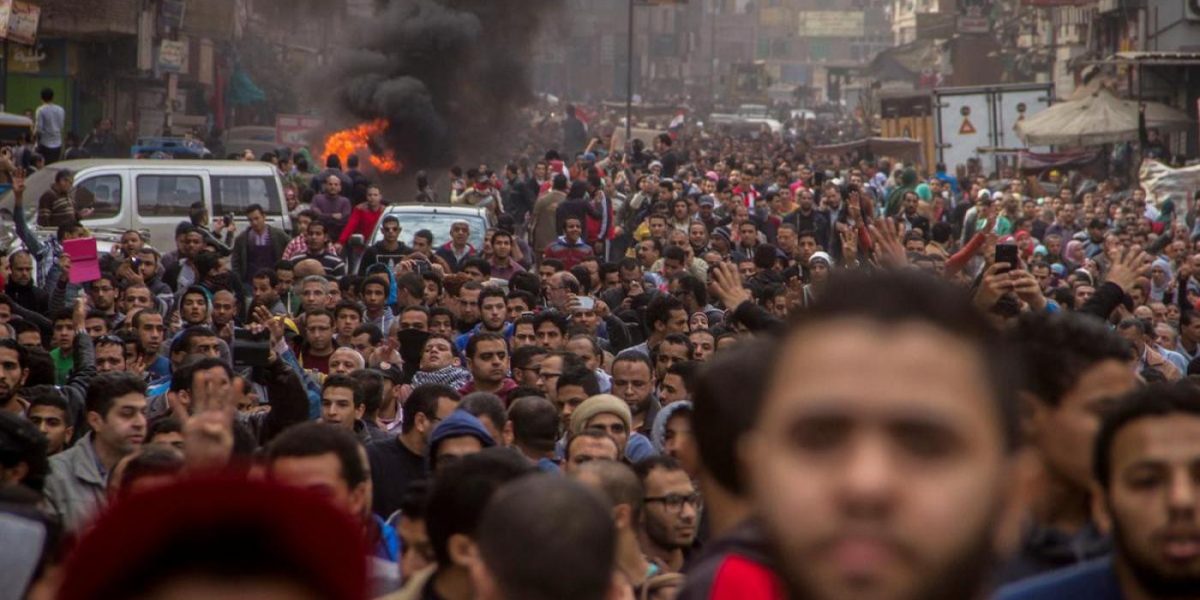 As the Sudanese revolution enters a new period, with intense debates over a mixed military and civilian interim council, it is important to recall the counter-revolution in Egypt that began in 2013. This is a reminder of how the ruling class reacts to losing power even temporarily. But this article is also a testament to the strength of the revolutionaries and their ability to see the long-term possibilities for change, particularly because capitalism is prone to crises and the people can rise up at any time. It also shows the need for revolutionary organization. We are honoured to interview Sarah Hegazi who took part in the Egyptian revolution and was imprisoned by the current Sisi regime. She succeeded in obtaining refugee status out of Egypt.

What is life like in Egypt under the current military rule?

No visitors are allowed. When I was in prison I had almost no visits. I was in prison for three months and they put me in a solitary cell with no fresh air, no talking , and no people, so I developed depression and lost my eye functioning.

Now they do this with all transgender people and other political prisoners.

There is no political life now, just one voice which is that of the military, the system, the regime. There are no human rights, women’s rights, refugee rights, or rights for journalists. Anyone female, not Muslim or Sunni, not heterosexual, or who does not agree with the regime will be oppressed.

What forms does the oppression take? Prison, stigma, you can be fired from your job, like I was because of opposition to the regime.

The regime controls educational subjects/curriculum; there is no renewal or updating. In schools if women do not wear the hijab, the teacher will be cruel with you (this happened to my sister).

What is the economy like? How does this affect social or political change?

Recently the regime raised the gas price, so literally in Egypt only rich people can live. Gas is used for cars, but also for delivery of products e.g. food, so this will have an impact on the consumption of produce because produce prices will also increase. The rich will live and the poor will die. The regime will put people in prisons for protesting and the clerics will tell people “to be patient because god tells us to be patient and heaven will be our reward.”

So people can’t live like this. Will the people fight back? I think so . But people are afraid. If there is a revolution, it won’t be now but it’s coming.

Can you discuss the role of women revolutionaries?

Elham Eidarous is a founder of the Bread and Freedom party, a socialist party, founded in 2013. She has a long history of protest and struggle and is now the party’s legal adviser. Another well-known figure is Mozn Hassan, who fights for women’s rights and supported those who were sexually assaulted during the revolutionary period in 2011. There are many women leaders.

There have been speeches about ensuring women are a priority for democracy, labour rights and bringing down the regime; so we have to bring up women’s and LGBTQ rights as a priority. The Bread and Freedom Party created an  anti-harassment policy as part of ensuring the rights of women and the LGBTQ community

Organizations are forced to work underground. The left wing is not organized, and you need organization to make strikes and protests. For the future, I believe the Middle East will change, because everything changes.

Everything is related; even the West and East are related even if people don’t see it. Marxism is materialist and dialectical – everything is related, so if the West makes war in Syria, it impacts a few years later with refugees arriving in the West. The Western powers think they will destroy the East via imperialism, but there is always an impact on them, a “blowback” ; this is what dialectics means.

What are the lessons for Sudan?

Don’t let the military or the religious rule take over. To stop them, there will be bloodshed. If you want revolution, you have to stay in the squares and not go home. As for the military, If you have weapons you are stronger than those who are unarmed. So it has to be the majority who refuse to fight against the people. I don’t believe in heroes but in the Middle East, Egypt and Sudan, when someone in the military says “NO” , they will be the hero!

If Sudan succeeds, the Egyptian regime won’t be happy because even last month Sudanese people spoke out against Sisi. The Sudanese Rapid Support Force (militia, former Janjaweed) is not particularly well-organized and protesters can take advantage of this.

It would be unwise for the Sudanese to count on “international” or militaries from other countries to defend them. Such involvement always comes with conditions, usually not good for the country being “helped.”

So, strikes and staying in the streets are what is necessary to force change.