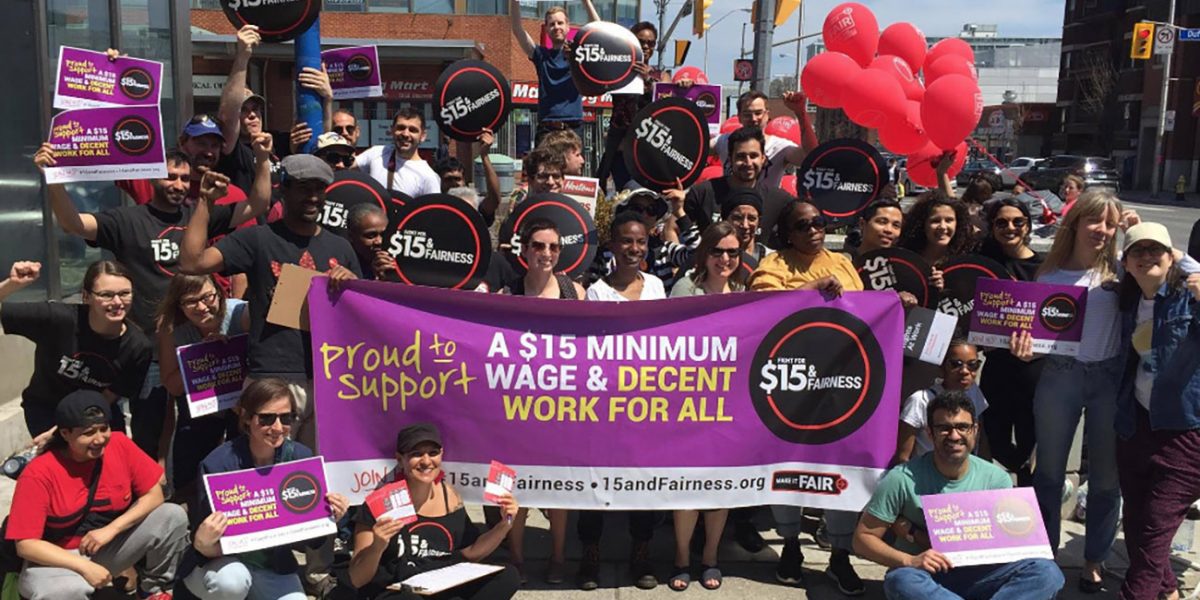 Spring Magazine interviewed organizers from the campaign about how they’re bring the fight for decent work to their communities — from neighbourhood, to campus, to health — including the successes, the challenges and the next steps.

It was from going around with her to different workplaces and communities and seeing the everyday struggle of the people, when I decided that I should start helping my own community and I started attending $15 and Fairness organizing meetings. Then I started doing outreach here in Etobicoke-Lakeshore, an area where Etobicoke seem to be doing well while Lakeshore struggles.

As far as my experience so far, it’s been a roller coaster, up and downs but when I get a ‘thank you’ and ‘keep fighting’ from a community member it’s all worth it.

I been applying my decent work lens to my area of work by always having an ear out for my coworkers at work, in terms of making sure that their rights are never being violated. By constantly reminding them that they have a voice and to always stand up for what they believe in and stand up for their rights.

Giving them information about the new labour laws, whether it’s giving them a pamphlet or a leaflet, “knowledge is power.” And simply just being there for them no matter what they are going though, workers need to stand together.

There have been so many highlights, but being given the scholarship to be part of the Feet on the Ground leadership training program is been the top for me. The training program is really amazing , you really learn how to do deep organizing and they provide you with the tools you need to do this effectively and efficiently. I have leant and grown so much because of this training program.

I think the biggest challenge so far is organizing in an area that is super conservative, which means the majority of people voted against the interests of the working class and hence our campaign.

They call my area the “dark zone” since it’s Doug Ford’s back yard. But in all honesty this makes my work fulfilling and not only important but necessary . Yeah I say bring on the challenges.

Some next steps for me is to build a really strong decent work movement here in Etobicoke-Lakeshore. That’s got to look like having monthly organizing meetings and monthly know your rights workshops for community members. I hope to build a movement where we can actually invoke change, whether it’s by getting my community to vote a certain way or by disrupting the status quo though mass action .

Other people can get involved by signing up on the $15 and Fairness campaign website or by rsvp’ing to one of our action here, and coming out and seeing what we are trying to build.

Then it’s our job as organizers to make our organizing irresistible, and that the power really lies in the hands of the people: collective power.

I’ve been lucky to dip my toes into various segments of the $15 and Fairness campaign. It’s given me an opportunity to see what really makes our movement so wide-reaching:

the struggle for decent work speaks to every neighbourhood, every sector, and every demographic. And organizing for $15 and Fairness looks different for each of these caucuses because our strategy is adapted to that community’s context.

At UofT, I’ve had the pleasure of working with a very energetic group of students who are bridging the fight for decent work with resisting Ford’s education cuts, and bringing it to a campus that is otherwise quite atomized and apolitical.

Student organizing so easily absorbs the decent work movement because students are — before, during and after our studies — workers. We represent a generation that has to reckon with the whims and various permutations of capitalism, and we are also a generation that is especially attuned to the impacts of capitalism because of what little it has given to us and how much it has taken.

And so in our work in the campus caucus, and in my own work as a public health student, decent work is so clearly tied to our fight for good health, for a public post-secondary education system, and for justice across all other axes.

At UofT, for instance, we’ve applied the decent work lens at the Dalla Lana School of Public Health by hosting a public health labour rights symposium last year, which included speakers such as Kara Manso from the Caregivers’ Action Centre as well as a workers’ rights workshop.

One of the main highlights of my year of organizing with $15 and Fairness at UofT has been the many creative ways we’ve engaged students on campus. We have a core team of very motivated student organizers who are keen to think outside of the box, and we are also lucky to have strong alliances with groups like OPIRG Toronto and CUPE3902 Flying Squad.

Last year and over this summer, we organized several petitioning canvasses. One of them was a “Lemonade for Fair Pay” action in the summer heat, featuring free lemonade and candy alongside deep conversations with students and community members about Ford’s cuts to $15 and Fairness.

We also use these actions to shed light on the contradictions of capitalism: a recent action which allowed passersby to write their wages and tuition fees on a wall of chart paper also drew attention to the egregiously high salary of UofT president, Meric Gertler. Creative actions like these, including workers’ appreciation actions that build relationships with campus workers, allow us to reach a broader group of students.

UofT $15 and Fairness has also built a relationship with groups like Leap UofT, such that climate and labour student movements can fight Ford’s austerity regime together.

Challenges remain, of course: UofT is notoriously hard to organize because of the concentration of wealth at our institution and the culture of isolation and individualization that’s perpetuated by the University’s own politics. Compared to groups at York and Ryerson, it’s much harder to get UofT students out on the streets.

But it just means that we have to try much harder at building meaningful alliances, finding ways to reach a very large and heterogeneous student body, and circumventing structural barriers of the University as well as Ford’s attacks on student groups. We are also hoping to build our base and core members’ capacity so that our campus movement is self-sustaining and regenerative.

We will be working with other student groups to continue to build power on campus, and show up for each others’ struggles, whether it be divestment campaigns or fighting Ford’s Student Choice Initiative.

The September 27 Global Climate Strike is also coming up, and we hope to join forces with other groups to get as many students engaged and politicized as possible through what is currently speaking to our generation: the climate crisis.

If students and community members at UofT would like to get involved, they can message us on Facebook @15FairnessUofT about our next action or event.

I got involved with the Decent Work and Health Network (DWHN) through an anti-poverty group called Health Providers Against Poverty. They work closely with the DWHN. What drew me in to the Network was the fact that I got to hit the streets and tangibly advocate for change – that was something I had never really done before.

My experience has been enriching. Through the DWHN and the Fight for $15 and Fairness campaign, I found a community that consistently inspires me to be an agent for social change and to broaden my intellectual horizon. I feel very supported and encouraged in my journey as a relatively new advocate.

Right now, we are doing a research project that will capture the impact of labour legislature on health by getting the perspectives of both workers and health providers on the topic. More specifically, we will look at the impact of paid sick days, sick notes and job-protected emergency leave (PEL).

Another one of our current goals is to focus on community and professional partnerships to allow for broadening and strengthening the decent work movement across health sectors, within the network and throughout the province.

On a personal level, one highlight is having found a sense of community as a newcomer to the city, and, meeting a lot of unapologetic leaders — in particular the womxn! Some of my biggest personal challenges stem from being a new organizer.

As someone who is passionate about a lot of causes, the art of saying “no” has become crucial. It’s easy for me to become over-committed, subsequently overwhelmed and paralyzed from anxiety. Understanding how much to take on, and when, has become integral to my self-care and my productivity as an organizer.

As part of the broader movement for decent work, the DWHN had campaigned on three main demands during the Changing Workplaces’ Review in 2015 (CWR): seven paid sick days for all workers, PEL for the more than 1.5 million workers who were denied them, and an end to sick notes.

One of the biggest highlights from this campaign was our ability to mobilize nearly a thousand health-providers to sign a petition supporting these demands, which was presented to the Health Minister, and three DWHN members participating in the CWR deputation to further articulate these demands.

After receiving the final recommendations of the CWR, the Ontario government implemented Bill 148 on January 1, 2018, which included several of our demands: 10 PEL days, the first two paid (i.e. paid sick days), and an end to sick notes, as well as raising the minimum wage to $14/hour.

A year later, Bill 47 eliminated many of these gains. One big challenge, which we know is not unique to the DWHN campaign, is trying to push the government to reinstate the original demands that were critical to the health of individual workers and the public. Our 10 job-protected PEL days became 8 proscriptive days (three for sick days, two for bereavement, and three for family responsibilities), none were paid, and sick notes were reinstated. DWHN worked tirelessly to support healthcare workers to speak up and talk about the impact of these changes on workers.

DWHN published an op-ed, launched a social media campaign to defend paid sick days, gathered petitions and met with MPPs, delivered the medical evidence to the Health Minister and helped expose the extent to which Bill 47 failed to consider health impacts, participated in deputations against Bill 47, and lobbied the OMA to pass a motion in support of paid sick days.

Our efforts contributed to unprecedented media coverage and public support. The Canadian Medical Association even released public statements decrying the reinstitution of sick notes and launched its own petition against sick notes: saynotosicknotes.ca. Despite Bill 47 passing, polls found that 77% of Ontarians were against its scrapping of two paid sick days. While Bill 47 was a set-back, there is an even broader base of support for decent work, which we want to help galvanize in the next phase of the campaign.

The best way to get involved is to come to one of our meetings or reach our directly to me at decentworkandhealth@gmail.com. We love to have new members at our meetings!