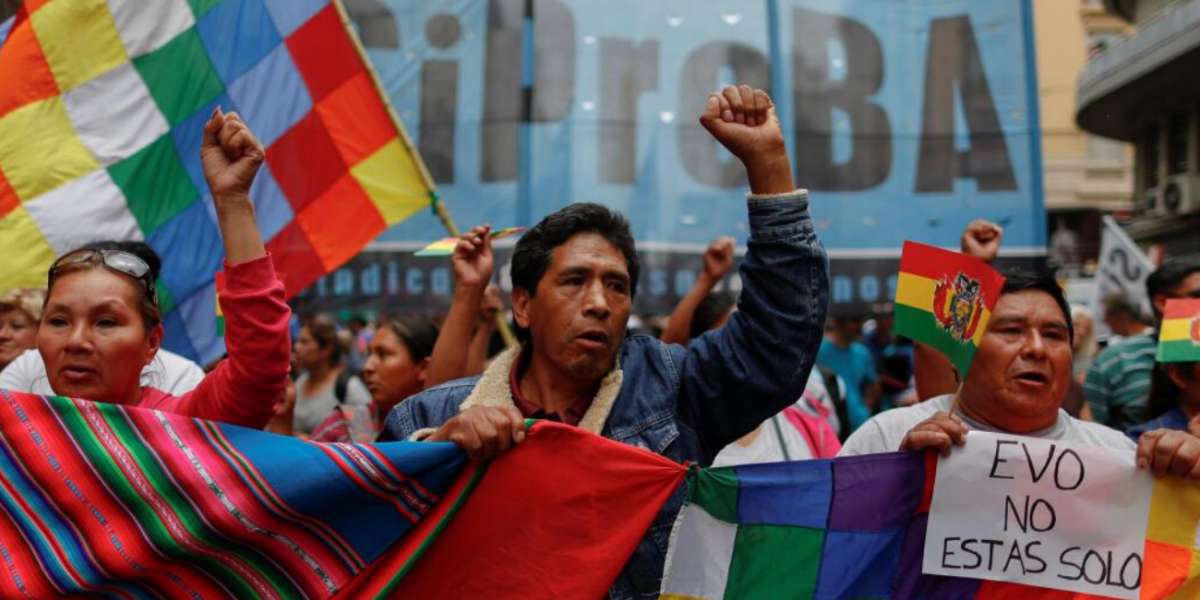 The President of Bolivia, Evo Morales, was forced out of office in a coup.

Morales announced his resignation on Sunday when it became clear that the armed forces were turning on the government. Other leading elected officials who were part of Morales’ Movement Toward Socialism (MAS in Spanish) have also been forced out of office, including Vice President Alvaro Garcia Linera and the President of the Senate Adrianna Salvatierra. Media outlets and politicians in Canada are denying that this was a coup, but as the Red Nation notes, “this is not a resignation. No one resigns with a gun to their head.”

Colonial empires have exploited the land and labour of people in the region for centuries. The silver mines in what is now Bolivia provided the wealth on which capitalism was built. As Eduardo Galleano explained in Open Veins of Latin America, “the history of Latin America’s underdevelopment is, as someone has said, an integral part of the history of world capitalism’s development…our wealth has always generated our poverty by nourishing the prosperity of others–the empire and their native overseers. In the colonial and neocolonial alchemy, gold changes into scrap metal and food into poison.”

Since being elected, Morales and MAS in government have presided over the continent’s greatest redistribution of wealth towards the poor and workers. In the last 13 years Bolivia has seen its poverty rate shrink from 60 percent down to 34.5 percent, its minimum wage increase by roughly 600 percent, and government social spending directed towards the most vulnerable sections of the population increase by 80 percent in real terms. The poor, workers and the Indigenous peoples have overwhelmingly been the main beneficiaries of Morales’ time in office.

When the MAS and Morales first formed government in 2006 one of the first things they did was renationalize the hydrocarbon industry. After that they proceeded to nationalize the biggest telecommunications company in 2008, the hydroelectric complex in 2010 and the leading power company in 2012. On November 4 Morales cancelled a December 2018 agreement with Germany’s ACI Systems Alemania to develop lithium deposits in the Salar de Uyuni salt flats after the local community voiced strong opposition to the deal. The region has 50% to 70% of the world’s lithium reserves a vital component for batteries and thus the electric car industry.

Indigenous peoples asserting their sovereignty is a threat to global capitalism. As Morales stated after the coup “My sin is to be ­indigenous, a trade unionist and a coca grower.” This is why Morales and the MAS have always been loathed by Western governments, the media and Bolivian oligarchs.

As the Globe and Mail reported in 2012, “Bolivia’s President Evo Morales expropriated the silver and indium mine managed by a local unit of the Canadian owned SAS (South American Silver, now Trimetals mining inc.) on Aug. 2, in a move strongly criticized by the Canadian government and foreign investors.” Now Canadian corporations are getting their revenge, with the support of the government.

The small but powerful U.S. backed oligarchy in Bolivia has long sought to get rid of Morales and quash the powerful social movements that support his government.

On October 20 Morales won his fourth election capturing 47 percent of the vote, over 10 percent more than the next closest rival, which under Bolivian election rules means Morales won without needing a runn-off. But the rightwing disputed the results and organized weeks of escalating and violent protests, which finally saw Bolivia’s armed forces side with the unelected opposition figures to oust Morales and other elected MAS officials. It is important to note that Morales even agreed to rerun the election, but that was refused by the opposition.

Over the last number of weeks, the rightwing has launched brutal attacked against MAS members and indigenous activists, and the forceful removal of Morales has made trade unionists and Indigenous communities vulnerable to increased repression. Bolivian police officers have recently been videotaped cutting off the Indigenous Wiphala flag, one of Bolivia’s two official flags, from their uniforms. A clear indication that the Bolivian righwing aims to attack the advances made by Indigenous peoples. Morales and other leading MAS officials had their homes ransacked and now Morales is now leaving for Mexico to seek asylum.

The situation is fluid as MAS, Indigenous activists and workers are fighting to protect their democratic rights. But what is clear is that the rightwing in Bolivia has been supported by the U.S. and Canadian governments and corporations.

After the coup Chrystia Freeland, the Minister of Global Affairs Canada issued a statement saying, “Canada stands with Bolivia and the democratic will of its people. We note the resignation of President Morales and will continue to support Bolivia during this transition and the new elections.” This is nothing short of giving carte blanche to the undemocratic removal of Morales from office.

The Canadian government must be pressured into reversing its stance on the coup. The mainstream media and most politicians are denying that a coup took place. Some politicians have begun to speak up. In the UK Jeremy Corbyn tweeted the following shortly after Morales announced his resignation, “To see @evoespueblo who, along with a powerful movement, has brought so much social progress forced from office by the military is appalling. I condemn this coup against the Bolivian people and stand with them for democracy, social justice and independence. #ElMundoConEvo.”

This was followed by left politicians in the United States like Bernie Sanders, Alexandria Ocasio Cortez and Ilhan Omar also condemning the coup. In Canada, newly elected NDP MP Matthew Green tweeted “This recent escalation by the Bolivian military to seize control during this coup is very troubling. We must support Mexico’s call for diplomatic efforts to restore the democratic process in Bolivia. Canada ought to be denouncing this military coup and *not* legitimizing it.” NDP MPs Niki Ashton and Don Davies have also condemned the coup, but thus far this remains a minority position within the party.

The NDP, trade unions and all other people of conscience in Canada need to forcefully condemn the coup. And this needs to happen soon. To should solidarity activists on the ground can organize and attend solidarity rallies, contact their local MP, write letters to the editor, write op-eds, engage on social media, raise the issue in their faith communities, talk to their co-workers, raise the issue at their union meetings, and organize to pass resolutions at their union condemning the coup. The Canadian left must build the widest unity possible to oppose the coup.

The attack on Morales and the Bolivian government is an attack on democratic rights and Indigenous peoples everywhere and must be forcefully opposed.

In Toronto there is a solidarity rally on Tuesday Nov. 12 at 6pm at Matt Cohen Park.