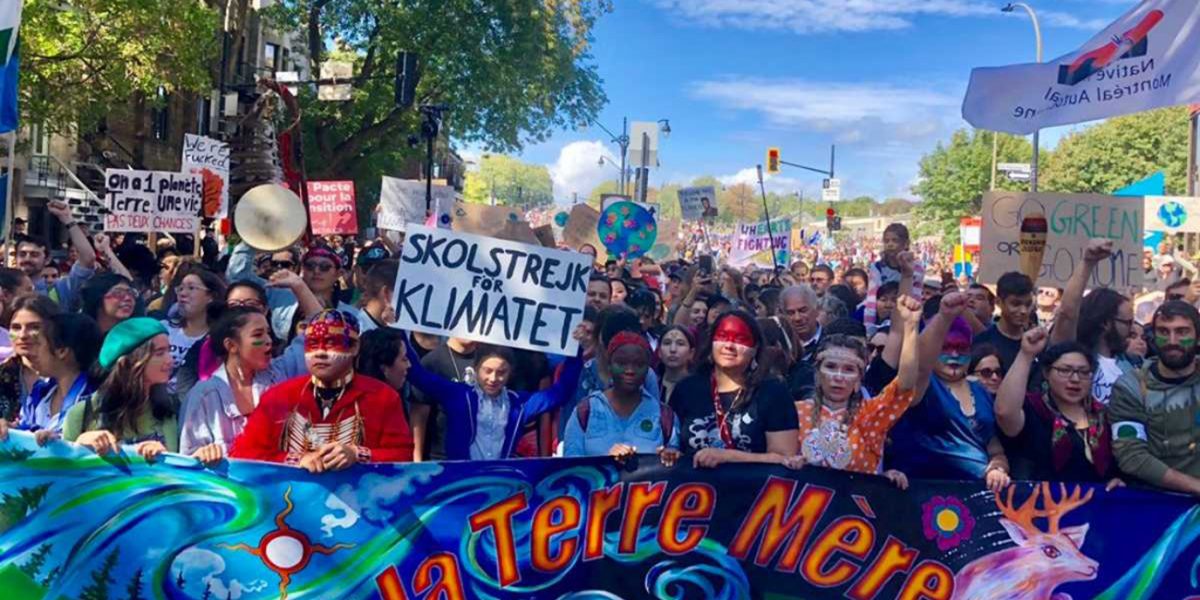 In the past week 7 million people from around the world took part in the largest climate marches in history, including 800,000 across Canada and Quebec. All these numbers are far higher than even the most optimistic predictions and Montreal led the way, with 500,000 joining the Indigenous-led event. Below are a few reports from across the country.

Over 60 activists assembled in a Quebec City church at 6 am on September 27 to receive instructions about a symbolic action in advance of the global climate strike rallies planed later that day. Half an hour later four teams were deployed to block the only entrances to Quebec’s Ministry of Finance building in old Quebec. Legault and his CAQ government were targeted based on their support for controversial environmental projects, such as a natural gas pipeline and third autoroute bridging Quebec City to Levis crossing the St. Lawrence River via tunnel.

Under the banner of Extinction Rebellion Québec and aided by Quebec City’s cooperative direct action networks, the surprise action successfully shut down the Ministry, including its communications wing, limiting the government’s capacity to respond to the events that morning.

The widely reported event was also a success in setting the tone in advance of the events planned for later that day including a 30,000 person march through Quebec city and an unprecedented turnout for the climate strike in Montreal, where Greta Thunberg participated and Justin Trudeau had eggs thrown at him.

As elsewhere, the youth-led FridaysforFutures has been organizing student walk-outs since December 2018, beginning with only a few dozen participants. While they have grown steadily in size, the boost provided by growing public concern (climate is now a top priority for voters) and frustration with continued government and corporate inaction ensured a big turnout on September 27.

The event was planned by a coalition of both new and well-established community organizations organized by Climate Justice Toronto (CJTO) group, itself a product of the youth climate justice conference Power Shift held in Ottawa earlier this year.  CJTO has deliberately created a youth-led, highly intersectional organization and these politics were clear in the September 27 event.  The evidence came in the messages on banners, placards and words of the speakers and musicians. The day featured a rally, march downtown and a return to Queen’s Park (whose name is well overdue for an anti-colonial change) for rappers and other youth musicians.

T’karonto speakers supporting solidarity with Indigenous struggles recalled the strength of water and land defenders who have been active on Turtle Island for centuries, with Standing Rock only the most recent well-known example. Others spoke of the ongoing harm to Grassy Narrows First Nation in northwestern Ontario, where the government continues to ignore the demands from this mercury-poisoned community.  Its members suffer serious health effects from mercury dumping into the community river by a 1960s paper company, and are demanding not only compensation but especially a “mercury centre” where their specialized health needs can be properly addressed.

A young member of IBEW (electrical workers union) called for a full transition to a carbon-free economy and emphasized the need to equitably train new and existing workers for the many jobs that will be created. Youth speakers described their anger and hope in speeches and songs.  While some unions gave general support for the day, none called for an actual strike. One hopes the youth will spark calls in the labour movement for serious strike action.

The goal of unity faces challenges, especially from some older environmentalists, who argue that stopping the use of fossil fuels is of paramount and separate importance from decolonization, fighting white supremacy, poverty and other social injustice. But September 27 made it clear that those old arguments won’t hold because they have been unsuccessful to date and because they don’t represent the kind of world we must have for the future. The climate crisis disproportionally affects poor and oppressed communities, and same forces perpetuating the climate crisis are scapegoating migrants. As Maya Menezes said, “We don’t have an immigration crisis, we have a racism crisis.”

In Vancouver, the September 27 Climate Strike rally and march was wildly successful, with about 100,000 people crowding onto the grounds of Vancouver City Hall, and joining the enormous march to the downtown branch of the public library. The event was organized by the Sustainabiliteens, a group of high school students that formed in 2018 as part of the Fridays for Future movement inspired by Greta Thunberg. The rally organizers commented at the rally that their first climate strike event last year had only a handful of attendees, but obviously the movement has really grown since then! Up to a few days before the rally, the group was projecting a modest attendance estimate of only 15,000 so even they must have been surprised by the size of the turnout.

The rally opened with speeches by indigenous water protectors Audry Seigl of the Musqueam Nation and Kwitsel Tatel (Patricia Kelly) of the Sto:lo Nation. The organizers saved most of the other speeches for the final gathering at the library after the march, allowing the energetic and youthful crowd to get marching and chanting as soon as possible. Because of the enormous size of the rally, it took more than an hour for all the marchers to empty out from the city hall grounds and into the streets.

Once on the street, the youth of marchers and the creativity of their signs was evident. The vast majority of signs were made of repurposed cardboard boxes, with many of the slogans reflective of the perspective of the young activists who created them; ‘You’ll die of old age, I’ll die of climate change’, ‘We are the leaders of today, because we might not be here tomorrow’, ‘I don’t want this to be my midlife crisis’, ‘We’re skipping our lessons to teach you one’  and many echoing Greta Thunberg’s calls to action; ‘I want you to panic’ and ‘Our house is on fire!’.  A few even made the connection between our economic system and climate catastrophe, with slogans like “System change not climate change, duh!’, Capitalism vs the climate; which side are you on?’ and ‘It’s not CO2, its capitalism’.

Chants that arose during the march were overwhelmingly simple and direct; “ What do we want? Climate action! When do we want it? Now!” was the most commonly heard refrain, but the climate strike anthem, “We are unstoppable; another world is possible” was also popular, as was the old standard, ‘The people united will never be defeated’ (No doubt it was the first time this younger crowd had heard this protest march classic!).

Some of the adults participating in the event couldn’t help but favorably compare the size of this march to some they had participated in or organized in previous years. Long-time anti-war organizer Derrick O’Keefe attended the climate march, and commented that it was bigger even than the huge mobilizations against the war in Iraq in 2003. Other activists commented that they hadn’t seen a march this large in Vancouver since the enormous anti-nuke protests of the 70s and 80s.

Sometimes when climate marches happen, some people argue that they have little impact on politics or society at large. But no one I talked to felt that way about this one. Students have reminded us that when we act collectively, we do have a powerful voice. Let’s join them to continue to build a climate justice movement that can push for the better world that we know is possible.

Our vision was to have between 3, 000- 5, 000. But to hear that we actually had 20,000 really shows how much people care about this issue. Over 50 businesses in Victoria shut their doors for the event and 11 churches rang their bells at 11 to signal the 11 years left to take action. Labour was present in a way that was great, but certainly I think where the next steps for the movement lie. It was really the student / parent contingent that brightened my heart.

So many kids and youth from pre-school, K – 12, and postsecondary were there, quite often with their parents following their lead. Over half of my class of grade 3s and 4s were picked up by parents or grandparents to attend. It’s very clear that the youth movement has a passion and an energy to tackle these issues, and we need to do what we can not to capitalize, but to offer guidance and support.

Music and art were key factors we wanted to involve in our action. From the legislature, we featured a curated DJ mix made for the event, Ragging Grannies, and the Resistance Rising Choir. During our street occupation, which we early on to label as a party, we featured a live street mural painting, and musicians: Hannah Rose, Thunderfeet, Nostic, and Niksa Napoleon. This is outside of those who arrived on their own with music and art. We featured speakers at both the legislature and intersection, included youth strike organizers, both indigenous youth and elders, labour, and more.