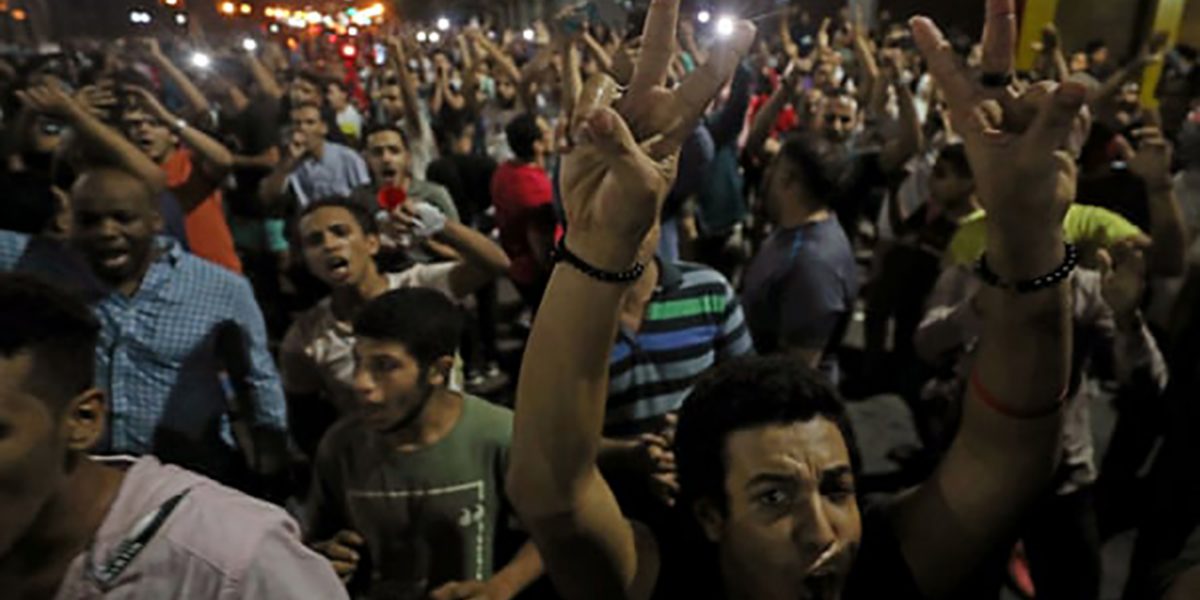 Once again, the masses have proved that they are far in advance of the political elite by surprising them, thousands answered the call of Muhammad Ali to go into the streets and demonstrate against Sisi. The masses have raised again the chants and slogans of the January 2011 revolution in the squares and streets, despite the possibility of heavy repression or arrest. The demonstrations of Friday 20 September in Egyptian cities represent a qualitative shift in the path of the opposition to Sisi’s regime. The wall of fear created by years of killings, arrests and torture has begun to collapse, with all that means in terms of the possibility of a mass movement and resistance in the coming period.

Many people are talking about conspiracies and splits in the regime as an explanation for this wave of demonstrations, pointing to the relative reluctance of the police to repress the protests. Such ideas reflect a serious lack of confidence in the masses and in their ability to overcome the defeats of the past and challenge the regime once again. It also reflects a lack of awareness that the masses opposed to the regime are not the same today and those who took part in the January revolution.

This does not mean of course that the splits and cracks in the ruling coalition since the 2013 coup have no role in the current political moment. Rather, they are an essential element of the current political scene. Splits and cracks like these usually herald the emergence of a mass movement from below, whether it goes in a reformist or revolutionary direction, as they send clear signals to the masses that the regime’s defences are becoming weak and beginning to collapse.

It is impossible to understand the possibilities of the current movement without understanding the nature of the crisis that the military regime is experiencing. Sisi came to power at the head of a counter-revolution, with the clear objective to eradicate the mass political movement to which the January 2011 revolution had given birth. He succeeded in creating a social base composed of a large section of the capitalist class and the middle class to support his programme of military dictatorship. The logic of this support was the panic created by the January revolution among these classes: panic at the wave of strikes, labour and social protests, and the political movements of the youth demanding justice, democracy and freedom. Panic also gripped them at the rise of the Islamist movements and their prominence in the political scene.

The deal was clear. The Egyptian bourgeoisie would surrender both its ambitions to share power, and a significant portion of its profits, to the military establishment in return for the eradication of the revolution which was threatening its interests.

Such deals are nothing new. Bourgeoises are often willing to make huge concessions to a military strongman in exchange for protection from revolution and threats from below. But the situation created by these kind of deals has an exceptional and temporary character. Once the revolution has been finally defeated, and the social and political movements which threatened the old regime eliminated, and once security has been established by armed force, and the revolutionaries have been driven into prison, exile or the grave, yesterday’s deal becomes an unbearable burden for the bourgeoisie. The military strongman transforms from a hero and saviour into a corrupt tyrant who must be removed. Indeed, it is his continuation in power which threatens stability, and immediately cracks start to appear in the alliance born out of “necessity” which was imposed by the circumstances of revolution.

On the other hand, the crisis caused by the revolution led to the recomposition of the balance of forces within the state itself. During the Mubarak era, the regime relied on a delicate balance between the presidency, the army and the Interior Ministry. The revolution upset this arrangement and the army “walked all over” the Ministry of the Interior, as Muhammad Ali put it, while the presidency “walked all over” the army. Everyone agreed to this on the grounds that was an exception and a temporary necessity to ensure the success of the counter-revolution and the consolidation of the coup. However, Sisi’s attempt to transform this new situation from exception to a long-term rule, as was clearly demonstrated by the constitutional amendments, in turn created cracks within and between the institutions of the state.

The relative recovery of the economy which was the result of increasing impoverishment and austerity on the one hand, and the expansion of so-called “mega projects” financed entirely by Western and Gulf loans, is also of an exceptional and temporary nature. For example, the new cities, such as the New Administrative Capital, and New El-Alamein City, with their huge infrastructure and the billions of dollars pumped into them, are not aimed at industry, or agriculture, or even tourism, and thus will not generate profits or income to repay the loans, or even the interest.

No political regime can survive through repression alone for a long time. There needs to be some kind of ideology which creates a degree of legitimacy for the regime among sections of the population. Fear can form the basis for legitimacy in exceptional and temporary circumstances, but it loses its effectiveness if the regime attempts to use it to stabilise its rule. This is what Sisi has tried, particularly since the amendments to the constitution, and this what we are seeing explode in the face of his military dictatorship today. We are facing the complete collapse of the regime’s legitimacy, and the emergence of a new popular consciousness which is hostile to the regime and is aware of its ugliness, its failure and its corruption. This popular consciousness is no longer taken in by naive claims about the dangers of terrorism and the Muslim Brotherhood, or about chaos and Syria and Iraq. It no longer tolerates policies of impoverishment and austerity while billions are being spent on presidential palaces, and neighbourhoods for the wealthy, the army, the police and businessmen.

But does this mean we are on the threshold of a new revolution, or even of a revolutionary situation? The cracks in the ruling class alliance, and the explosion of anger against Sisi and his regime genuinely represent a qualitative shift. However, that does not mean that regime is on the brink of collapse, or that the revolutionary process will be easy or short. The beginnings of the collapse of the wall of fear and the explosion of the current wave of anger are both important and dangerous. But they are only the start of a long road towards erasing the effects of the defeat which ended the revolution of January 2011, and rebuilding the foundations of resistance in the universities, workplaces, trade unions and professional associations. Down this long road the masses will regain their confidence in their ability to bring about change, and in the viability of the revolutionary project. All of this will require hard, organised work and it will certainly not happen overnight.

We must immediately build on the qualitative step taken by the masses. Firstly we have to build a united front across the full spectrum of opposition forces and groups in order to interact with the mass movement, and to develop a programme of demands which transcend Sisi’s regime and military rule. Secondly, to exploit all the openings which have begun to appear in the regime’s defences, in order to rebuild trade union, student and political organisation and to restore the political spaces which the counter-revolution closed by force. We have a long and hard battle ahead and it has already begun in earnest. The masses have taken the lead and now the revolutionary political forces must catch up.

This is shared from the Egyptian Revolutionary Socialists