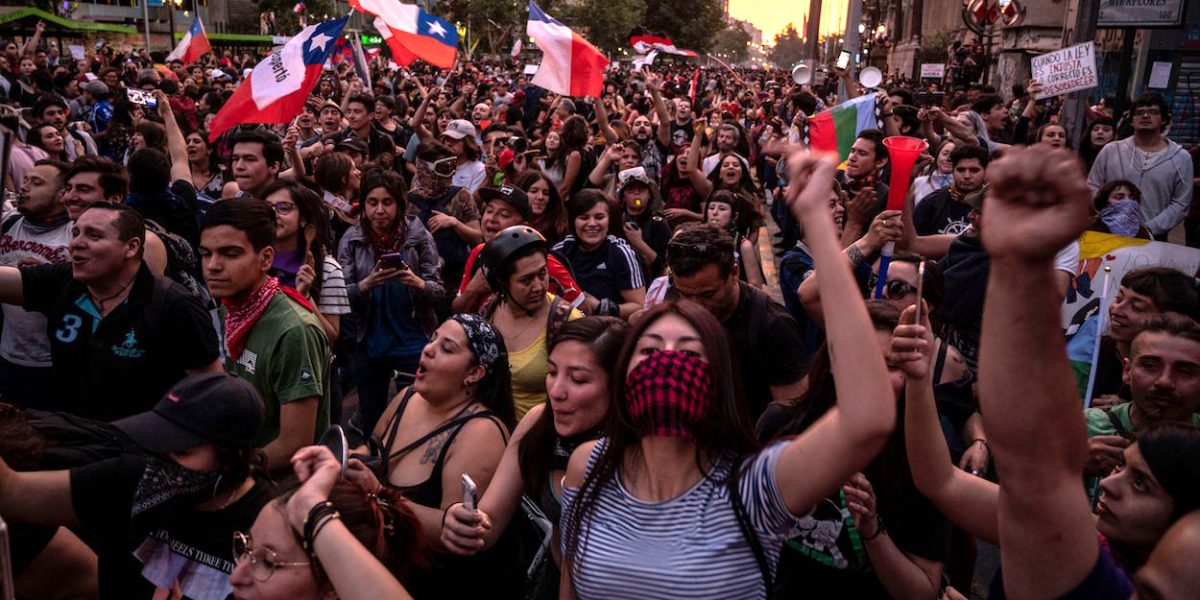 Five days after a CIA-sponsored coup in 1973 overthrew the democratically elected socialist president, Salvador Allende, the Chilean military murdered legendary folk singer Victor Jara. But not before torturing him for days and breaking his hands so he could never play his guitar again.

Forty-six years later, as Chileans flooded the streets against the ravages of austerity and neoliberal policies that the coup birthed, the songs of Victor Jara enchanted the streets of the country again.Legions of guitar-playing youth sang his “The Right to Live in Peace,” a direct challenge to a right wing president keen on stacking his cabinet with supporters of the dictatorship that ruled Chile between 1973 and 1990. It was an utterly chilling moment, with Chile’s long history of radical politics rising up again, never truly extinguished despite the attempts to do so by the former and dead dictator Augusto Pinochet and his imperialist benefactors.

How quickly a protest that began as a response to public transportation fare increases has turned into an insurrectionary situation is staggering. Yet, the 30 peso increased charge was only the tipping point after years and years of neoliberal policies that have gouged workers over and over again.

Chilean workers and students have faced decades of being used as a neoliberal laboratory, with the Pinochet dictatorship radically transforming the economy, including handing over traditionally public institutions and services to the private sector. Pensions, water, education were all opened up to market forces to disastrous effect.

Often cited as success story, Chilean economic growth has come along side rising personal debt and growing inequality. State-subsidized private schools and universities have brought with it huge student debt. Years of underfunded pension plans has resulted in poverty among the older generation of Chileans, unable to make ends meet with their meager pension cheques.

For the most part, the post-dictatorship consensus has meant that the economic agenda Pinochet initiated has not been challenged by either the centre-left or the right wing administrations that have governed Chile since 1990, both sides affirming the neoliberal consensus. Cracks began to appear when mass student mobilizations occurred in 2006 and 2007, under the Socialist Party president, Michelle Bachelet. For the first time since the end of the dictatorship political factions and coalitions began to emerge that challenged the neoliberal approach, including lurches to the left from the Communist Party and the creation of Frente Amplio, a coalition of several radical forces that emerged after the 2006-7 student uprisings.

Bachelet was elected to a second non-continuous term in 2013 under the banner of Nuevo Mayoria, a coalition that included radical student voices such as Communist Party student leader Camila Vallego, who was also elected to Congress with 5 other of her comrades. This time Bachelet ran way to the left, promising major reforms, including free post-secondary education, more progressive tax and labour codes, as well as a new constitution to replace the one made during the Pinochet dictatorship. However, the implementation of the reforms fell well short of expectations. Education remained commodified through a voucher system, the worst elements of the old tax code were left untouched, the new labour code did little to undermine the neoliberal insistence on flexibility, and Bachelet refused to convene a Constituent Assembly to write a new constitution.

It was little surprise that the resulting demoralization helped re-elect right wing billionaire Sebastian Pinera president, despite having  left office after his first term as a pariah.  The shock, however, was the emergence of Frente Amplio as an electoral force, with their presidential candidate Beatriz Sanchez, receiving 22 percent of the vote in the first round and almost advancing to the run-off against Pinera.

In many ways, Frente Amplio’s result revealed growing dissatisfaction among the Chilean workers and students, tired of the neoliberal consensus. It also foreshadowed the uprising we are in the midst of. The small increase to metro fares was the last straw, with the masses deciding they could no longer be pushovers for policies that further their poverty and marginalization.

Predictably, it was the students, who have built sophisticated mass organization since 2006, to lead the charge, organizing the initial fare-dodging protests and instigating nationwide marches that spoke to growing frustrations about the cost of living, meager pension cheques, and mounting personal debt. Pinera responded by declaring a state of emergency, bringing out the military to beat and in some cases kill civilian protestors. However, the acts of repression have only infuriated the population, with over one million joining protests against the government in Santiago. In addition to demands around inequality, protestors are pushing for constitutional reform and calling for Constituent Assemblies to accomplish this.

With the movement gaining confidence, Pinera is on the defensive, promising certain “social agenda” reforms and firing his entire cabinet. It is unclear how the political leadership of the protests will respond. Those associated with the centre-left have been quick to condemn all sides and will likely want to quell the protests as soon as possible to return to the status quo. Frente Amplio, however, seems less eager to concede any ground, stating that they will not engage with the government until the state of emergency is lifted and demilitarization begins.

What happens beyond this is unclear. Frente Amplio reaches back to the government of Salvador Allende for inspiration, with one member saying that it wants to “recover the sense of hope that was the hallmark of the Popular Unity government.”  The tributes the Victor Jara and Allende in the midst of the protests reflects a nostalgia for when the far left had a foot in government. Will Frente Amplio aim to replicate Allende’s 1970 electoral victory or will they continue to build upon these protests and build organizations of the streets or both? Its course of action will raise important questions for those familiar with the history of Allende’s attempt at democratic revolution and the forces it came up against both from capital and from the military. Almost 50 years after Allende’s election, reactionary forces will not concede anything without massive struggle, without social revolution.