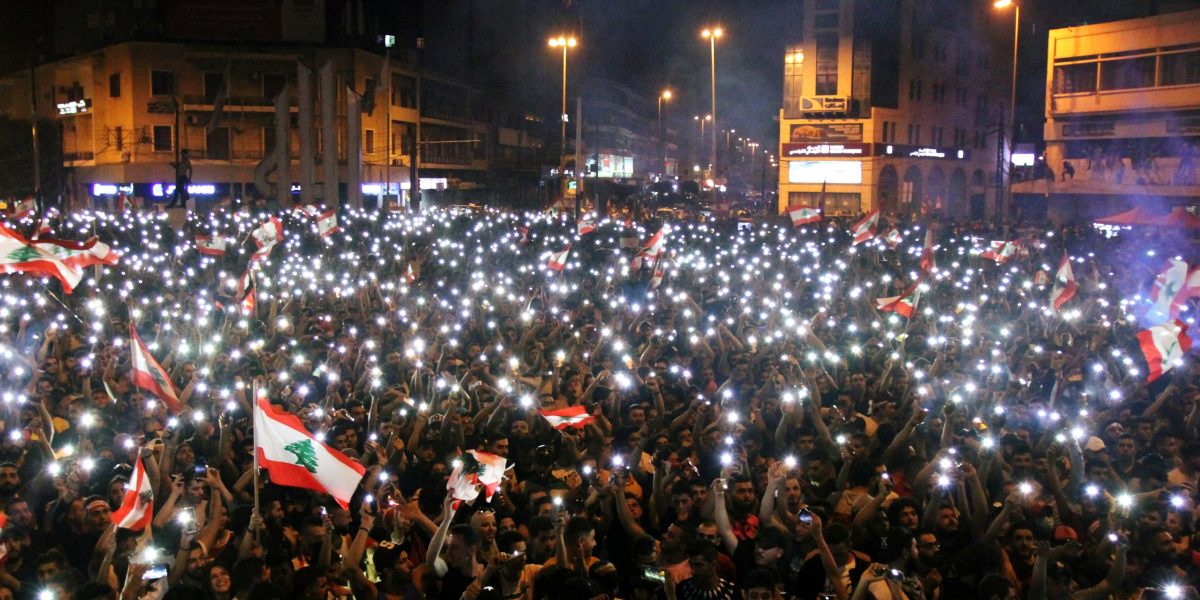 It is estimated that over the weekend about a million people took to the streets in Lebanon in an  anti-government, anti-austerity uprising . In a country of only 6 million this is an astonishing level of mobilization, equivalent to or exceeding the scale of mobilization in the Egyptian Revolution of 2011.

Spontaneous anti-government protests erupted late on Thursday in the wake of austerity measures and a slew of new taxes that included charges on WhatsApp calls. The government reversed the tax on WhatsApp calls but the protests have spread to other parts of the country with demands for better living conditions and an end to endemic corruption.

Protesters also took to the streets in the eastern Bekaa Valley and Tripoli, Lebanon’s second-largest city. Riots were also reported in the Roumieh and Zahle prisons.

The slogans of the revolt have become very radical. Demonstrators  are chanting Ashab yurid isqat an-Nizam (The people demand the downfall of the regime) – the great battle cry of the Arab Spring and also proclaiming their solidarity with Egypt, Sudan, Yemen, Iraq and the people of Saudi.

Most importantly the protestors are from all communities. What makes this so significant is that Lebanon has long been a country deeply divided by sectarianism between Maronite Christians, Sunni Muslims, Shia Muslims and Druze. For 15 years, from 1975 to 1990, Lebanon was wracked by bitter civil war on communal lines claiming 120,000 lives and Beirut became a by- word for destruction and chaos. Since then Lebanese politics have been structured on sectarian lines, with each of the main sects holding a position in government – the president must be Maronite Christian, the prime minister a Sunni Muslim and the speaker of parliament a Shia Muslim and so on. Now ordinary people across all these boundaries have united against the rotten establishment. Demonstrations have even been occurring in neighbourhoods dominated by the powerful Shia movement Hezbollah, not used to the opposition in its own bastions.

Also highly significant is the fact that the Lebanese rising is part of a wave of popular revolt sweeping round the world. In this year alone we have seen huge popular movements in Puerto Rico, Haiti, Hong Kong, Ecuador, Sudan, Iraq, Chile, Catalonia along with the global climate revolt. This shows that the thirst and potential for radical change is alive and well in the 21st century.

This article was first published on October 21, 2019 by People Before Profit, a socialist political party active in the Republic of Ireland and in Northern Ireland.