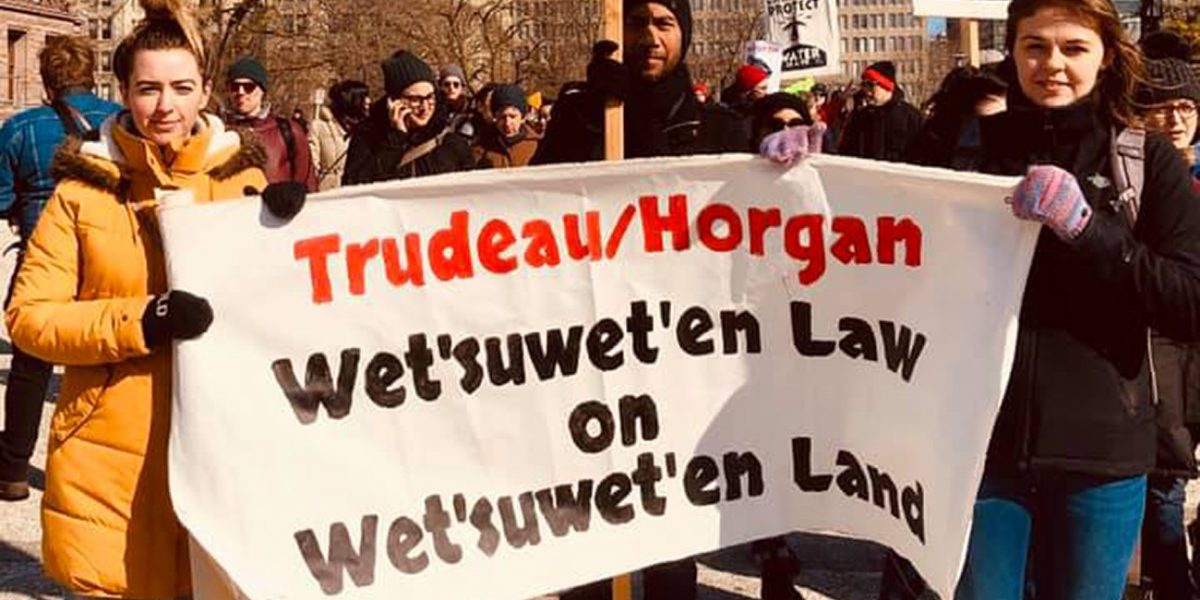 All eyes have been on the growing tension in the north west of British Columbia over a proposed gas pipeline by Coastal GasLink through the unceded territory of the Wet’suwet’en nation. Forcing through this gas pipeline both undermines Wet’suwet’en sovereignty and threatens environmental security by promoting fracking and further tying Canada’s economy to the production of strong greenhouse gases, primarily methane.

After generations of genocide, colonization, pollution and environmental exploitation there is little doubt that the Canadian state would do everything in their power to push through the Coastal GasLink project. On January 7, 2020 the RCMP invaded the Wet’suwet’en territory to enforce a deceitful court injunction designed to allow construction on the Wet’suwet’en ancestral lands. The response to the Wet’suwet’en hereditary chiefs’ call for solidarity actions was swift. Within hours, there were protests and occupations of critical rail transport routes in multiple provinces, including one in Tyendinaga Mohawk territory.

See here links from Spring Magazine about solidarity blockades, occupations and rallies that continue to multiply. At first, these protests were ignored. Then Prime Minister Trudeau called for a “peaceful and lasting resolution”, while refusing to consider withdrawal of RCMP from Wet’suwet’en territory. On February 24, the police in Ontario started clearing the blockades and arresting activists from Tyendinaga to those at a Toronto rail blockade.

Following expressions of outrage at Justin Trudeau’s handling of the situation and the hypocrisy, a new wave of solidarity blockades again proliferated. As Mohawk spokesperson Kanenhariyo Seth LeFort states, “When you ask for the rule of law, then you have to follow it yourself. Canada has committed a crime against humanity in Wet’suwet’en territory. It has broken its own laws as well as Wet’suwet’en laws and international laws. You cannot remove people from their own lands at the end of a gun. A crime has been committed and the RCMP are the criminals.”

When justice fails, block the rails

The effect of the rail blockades have been important for their symbolism. From the early 1870s to 1880s John A Macdonald created the Northwest Mounted Police to police Indigenous peoples, the Indian Act to displace traditional governance, and the Canadian Pacific Railway to cut through their territories and expropriate their resources. The current mass solidarity actions are challenging this trilogy: supporting the Wet’suwet’en hereditary chiefs, challenging the RCMP invasion of their territories and blockading the rails.

In additional to the symbolism, the fact is that Canada remains a nation connected largely by rail, and recent blockades have reveal this critical infrastructure as an Achilles heel of sorts. Halting the trains has left domestic resource extractors with no way to ship their goods. Dozens of freighters are stuck at sea with no way to off load and passenger train service was canceled. It is striking that this is exactly the kind of shut down that anti-capitalists have been calling for decades. Principled Indigenous activists have demonstrated how this can be done.

Despite the strong media rhetoric against the rail blockades, it is not clear that Trudeau and the industries he represents have broad support. Initial polling found that 39% support for the blockades, which is eight times the Indigenous population—showing a significant base of support among settlers. These days, generalized eco-anxiety and the government’s persisting commitment to dangerous fossil fuel pipeline projects has led to a new wave of ecosocialism and anti-capitalism. In the midst of the last federal election 800,000 people across the country took part in the September climate strike. Following from that, the current rail blockades constitute a historic moment, confirming that environmental activists working with Indigenous communities to advance Indigenous sovereignty have the power to directly affect the affairs of the Canadian state. Along with the existence of dozens of youth-led climate justice initiatives across the country following the lead of Indigenous communities a potentially deep base of support is emerging.

But sustained attacks from media and politicians are taking their toll, with recent polls showing that claims of economic impact and job losses are shifting attitudes further against the blockades. Meanwhile CN and CP have quietly been sharing rail lines to circumvent the blockades. The claims by CN that the blockades have forced them to fire workers are overblown at best. As the president of the Teamsters Canada Rail Conference said last November, “CN is telling our members that they are facing tough times, but the reality is that they made over $3.8 billion in the third quarter of 2019. They should be ashamed to be pleading poverty. This obsession with profits and shareholder return, at the expense of just about everything else, is exactly what is wrong with our economy.”

Taken together, it is critical to increase solidarity work to win wider layers to support the Wet’suwet’en struggle and the solidarity actions, and for the working class to use its own power to expose and challenge capitalism. We see movement in the right direction with both Wet’suwet’en solidarity rallies and a mass teachers strike across Ontario (which included teacher solidarity with Wet’suwet’en) and the continued blockade of the coop gas refinery in Regina and another recently in Yorkton by locked out workers.

The involvement of the working class will be essential to build a sustained movement to achieve structural changes for long-term social and environmental justice and a wind down of Canada’s adherence to natural resource capitalism. Here lies the North American version of a viable Extinction Rebellion movement, one which engages in Indigenous sovereignty and working class struggle.