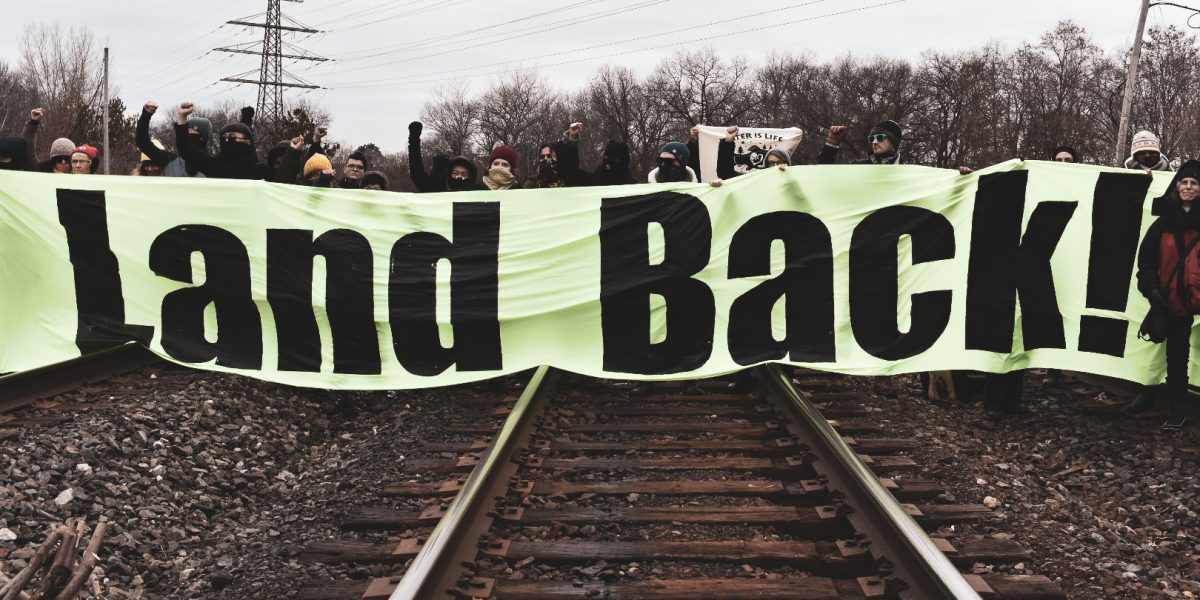 In a press conference on Friday, February 21 Prime Minister Trudeau called for the dismantlement of the rail blockades in solidarity with Wet’suwet’en and the enforcement of court injunctions. Just days later the Ontario Provincial Police (OPP) raided the camp set up along the rail lines in Tyendinaga Mohawk territory. In response, land defenders and solidarity activists in Toronto blocked a railway in the city’s west end on Tuesday. GO train services were disrupted by the blockade near the Kipling Go Station.

The police responded with over 100 armed officers on the ground while helicopters roamed the skies. Militarized police, armed with riot gear, were seen on-site. At the time of writing eight activists have been arrested on the railway, as hundreds of supporters gather near the lines in a standoff with the police.

Simran Dhunna, an organizer with Climate Justice TO, said, “yesterday, the OPP violently raided Tyendinaga territory. Since then, we have seen blockades erupt across the country. Our aim is to force Canada’s political leaders to find a negotiated settlement with the Wet’suwet’en based on their sovereignty and right of self-determination.”

48 hours after Tyendinaga, the Caledonia highway and the Sault Ste. Marie international bridge were blocked. GO train services were cancelled this morning west of Toronto because the railways in Hamilton were shut down by solidarity activists. On the west coast, the Port of Vancouver, the rail line near New Hazelton and the Victoria legislature are all re-blocked.

“We will not stand by while Indigenous peoples are displaced for the profit of Coastal GasLink. We will shut down business as usual for as long as Wet’suwet’en demands are not met,” Dhunna said. “Both the federal and provincial governments have had ample opportunities to negotiate with the Wet’suwet’en on a nation-to-nation basis.”

The blocked railway runs adjacent to Dundas as it curves southwest through Etobicoke and through the centre of Mississauga, eventually hitting Cambridge, London and near Windsor. To the northeast, the railway splits between a route towards Oshawa, Fort Granby, Port Hope, and continues through several towns until Montreal. To the north, the railway heads towards Peterborough and ends in Havelock.

Morgan Johnson of Rising Tide Toronto said, “this specific action today was in response to the OPP incursion on Tyendinaga territory. The Tyendinaga Mohawks put out a call for people to block rails locally, wherever they find themselves.”

Johnson explained that the Canadian government had coordinated a deal between CN and CP to share their tracks to circumvent the blockades.

“While the Tyendinaga are blocking a CN railway, we block a CP railway,” Johnson said. “In the end, both companies are instruments of Canadian colonialism and capitalism that we are trying to shut down until the Federal and BC governments agree to the Wet’suwet’en demands”

Whose rule of law?

Both Prime Minister Trudeau and British Colombia Premier John Horgan have invoked the rule of law in their remarks about the blockades, while ignoring the legal reality that different systems of law run through the land. Indigenous laws and constitutional orders like the Wet’suwet’en predate the establishment of the Canadian legal state.

The Wet’suwet’en and other Indigenous nations have long asserted that they are sovereign and assert their right to self-determination. In January, the Wet’suwet’en issued an eviction order and ordered the RCMP to leave their lands.