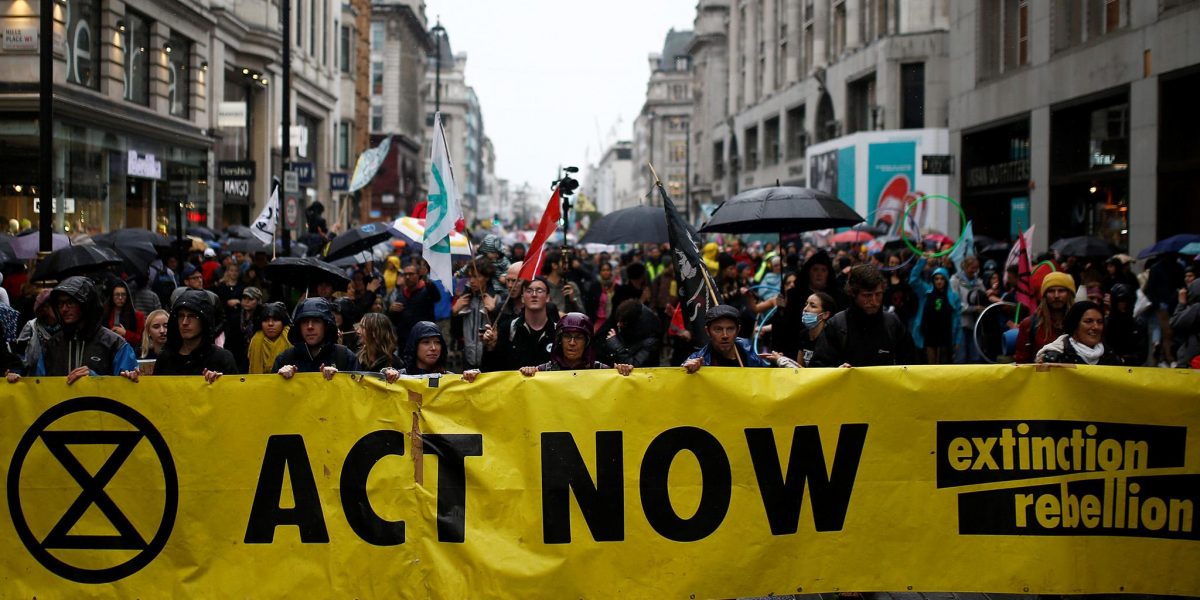 People have the ability to take a lot of shit. The planet is a little bit similar, having struggled along since the industrial revolution despite mass-pollution and ecological disruptions. This capacity to survive under such abuse has delayed a necessary reckoning. And while whole industries have been established to coax people into accepting their lot and planetary doom, there is of course a limit.

No number of focus groups and no degree of media bias can change the laws of physics, which dispassionately explain the quiet trapping of heat against the planet in relation to industrial CO2 emissions. We also understand now, that the Earth may be tipping away from livable conditions with the margins for human control becoming smaller by the day. And somehow, in the face of all this, the most breathtaking discovery may be that the depths of the pathological greed driving our planet-killing economies trump the obvious reality that not even a billionaire can survive on a dead planet.

Confronting a problem of this scale requires more than facts and polite lobbying. Enter the “Extinction Rebellion” (XR) movement. Working backwards from the unimaginable horrors that will be unleashed during the transition to an uninhabitable Earth, XR seeks to disrupt the ruinous status quo with a sustained campaign of all out nonviolent civil-disobedience.

One of the leading voices in this movement is Roger Hallam, a former South Wales organic farmer-turned environmental activist (I pause to note the other XR co-founder Dr. Gail Bradbrook, an important and authentic force in her own right). Hallam outlines a vision for a citizen’s movement in his book, Common Sense for the 21st Century: Only nonviolent rebellion can now stop climate breakdown and social collapse, available here. One measure of his ideas’ success is that the book’s largely UK scope was already outdated by the time it was published in November 2019, with XR chapters having been nearly instantaneously established across the globe following a series of high profile protests in London exactly one year before. It should be noted that a companion booklet, This Is Not A Drill: An Extinction Rebellion Handbook focusing more on the nuts and bolts of XR organizing was released at nearly the same time, as Common Sense for the 21st Century, but is not discussed in this review.

Common Sense for the 21st Century is a readable 100-page booklet with short chapters clustering around three themes: justification for a rebellion movement, development of a plan of action, and how to continue forward post-rebellion. In the first part, Hallam quickly reminds us why we picked up the book in the first place; ecosystems are collapsing and that there is no more time to play the losing game of reformism with opponents that have no intention of ceding an inch.

A proposal for rebellion

The next five chapters outline a plan of action. Starting with “A proposal for Rebellion,” Hallam attempts to drum up excitement for the XR project with an appeal to people’s gut instincts. Hallam reveals his organizing vision in “Bring down the government you say?” as a geared up progressive populism, something sorely lagging behind many reactionary movements these days. Against the backdrop of biased news, double speaking politicians and the unaddressed threat of climate catastrophe, the framing that “[r]ebellion is about giving people permission to say what they really think” strikes home as a poignant way to harness the angst that so many people are feeling.

Hallam reminds us of the previous approach preferred by environmental NGOs (e.g., Greenpeace), one that typically involved a few people operating secretly to pull off a media “stunt”. In contrast, he prefers to organize as many people as possible in the open, including a “proactive and respectful police engagement” which includes full transparency regarding the plans for an action. Hallam argues an effective mass movement must involve enough people to halt business as usual on a sustained basis using fully nonviolent means—essentially regular people taking space with their bodies and nothing else.

In practical terms Hallam estimates that this could involve initially 5,000 to 10,000 people for a single action, for example blocking major city centres or key transport systems. But the numbers should eventually reach hundreds of thousands. He notes that the ongoing unrest in France has engaged more than 200,000 at the time of writing, currently the general strike has seen millions take to the streets. It should be noted that the protests in France have reached this scale precisely because it forefronts working class demands.

A key distinction with French situation is that activists should “maintain a strictly nonviolent discipline even, and especially, under conditions of state repression”. For Hallam it is key that “[a]ny event involving large-scale mass civil disobedience needs to ensure that every opportunity is taken to promote the framing of nonviolent respectful action.” Here the pieces come together serving different goals. The primary action is designed to interrupt the status quo, but should also create a spectacle that cannot be ignored by the media and invites others to join in.

This is reminiscent of the general approach of Occupy, minus the logistical quagmire of maintaining a long-term camp and that the site of the action can be tuned for greater impact or even shifting in real-time via “swarming.” The latter approach is similar to the “be water” philosophy which was used to great effect by Hong Kong, and later Catalonian protesters (Tsunami Democràtic), to achieve similar goals, for example canceling at least 100 flights in HK and recently in Barcelona’s El Prat airport. A key secondary goal is to inundate the legal system with innumerable arrestees. The state, he argues, would be hard pressed to arrest thousands of people daily for petty non-violent crimes of blocking a road or a bridge. Moreover, he believes arrests would lead to a cascade effect of casting aside fear of rebellion and bringing in more participants. Thus for him, a successful mass action should end in mass arrests. Eventually, he argues, managing primary actions and the legal system becomes untenable for the state.

For the reader, key questions arise relating to the relevance of these tactics to the current social and political reality, especially outside of the UK. For example, I am skeptical about Hallam’s advice “words like honour, duty, tradition, nation, and legacy should be used at every opportunity.” More than reflecting a stuffy British quirk, this language betrays a certain weakness in addressing inclusivity, which pops up throughout the book. As well the supposed police response requires a deeper look. Hallam’s vision relies on a professional understanding with law enforcement, who would limit their role to dutifully conducting orderly mass arrests. The initial XR experience during their break-out 2018 London action, does justify this assumption, but recently it appears that police are becoming less tolerant towards XR. When XR protesters blocked the London subway last year, it alienated potential working-class supporters and gave an opening to the media to drive a wedge between the climate movement and the working class.

Building the power to win

Without a doubt, the book could have benefited from more attention to how XR activists could coordinate with workers unions, beyond certain historical examples of successful coalitions. The inability to see the workers as central in fighting to address climate change points to a real weakness of Hallam’s analysis and the XR movement. If there is any chance of addressing climate change, protest and direct action must occur on a massive scale both in the streets and at the point of production, where workers can best leverage their strength.

In countries like Canada where the environmental struggle is tied deeply to Indigenous sovereignty Hallam’s blueprints would have to be completely rewritten. It remains to be seen, for example, if certain XR chapters’ isolated actions in support of indigenous solidarity, can be transformed into the sort of mass direct action proposed by Hallam. It is clear Hallam’s section on future stages of rebellion will require regional amendments.

For me, the key to enjoying Hallam’s book was to revel in his openness to tell things as he sees them and for his enthusiasm in laying out detailed plans to mount an all-out response to the planetary challenges we face.

While the unvarnished style and limited scope may get under some people’s skin, it should be noted that Hallam fully acknowledges that he doesn’t have all the answers, and expects that future iterations work out the bugs. For now, his book’s goal is to demystify and expand an organizing model that in just a few short years managed to empower and organize large numbers of working-class Brits into a force to challenge the status quo. In the end, we should take this book for what it is: an urgent work in progress, expressing one person’s daring ideas to mount a last-ditch effort to save our planet.