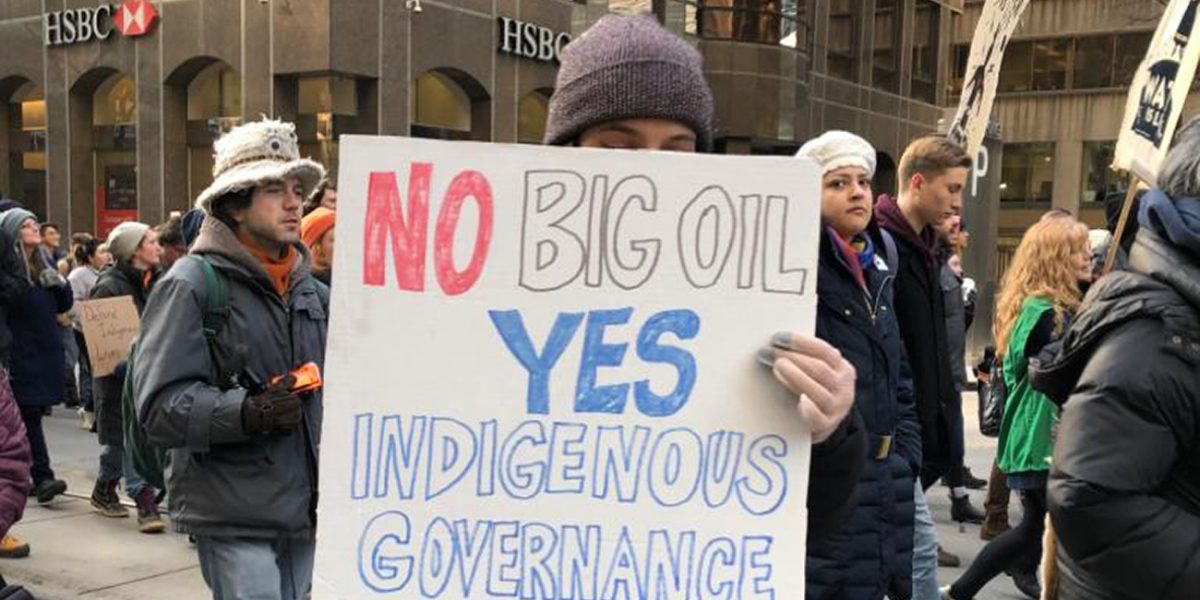 On Saturday, January 4, hundreds mobilized in opposition to the looming war on Iran. Just three days later, on Janaury 7, hundreds more demonstrated against the looming invasion of Wet’suwet’en territory.

At first glance these may seem like two disconnected issues; but in reality, they are extensions of each other. In both situations, imperial states are trying to control oil in, or passing through, other peoples’ territory—a denial of self-determination that requires violence to enforce and racism to justify, and which will worsen the climate crisis. But the demonstrations that took place around the world show the potential for building an international solidarity movement that can overcome racism and stop imperial and colonial violence .

For decades the US has used violence to control oil in the Middle East, from overthrowing Iran’s democratically elected government in 1953, to repeatedly invading Iraq and propping up brutal oligarchic regimes. There have been various reasons provided—from fighting terrorism and stopping weapons of mass destruction, to defending Kuwait or the Kurds. But as the US assistant defence secretary said at the time of the 1991 war on Iraq, “If Kuwait grew carrots, we wouldn’t give a damn.”

The real weapon of mass destruction has been Western intervention—from sanctions that killed half a million children in Iraq, to the 2003 war that killed another million people. These wars for oil have also been fuelled by oil, and while the US military is one of the largest carbon emitters on Earth it was exempt from the Kyoto protocol. The same governments that have caused humanitarian and climate catastrophes, and vilified refugees for fleeing, continue to insist that more war is the only way to remove repressive regimes.

But people across the Middle East have shown an alternative method of regime change—from the 1979 revolution that overthrew the US-backed Shah in Iran, to the 2011 revolution that overthrew the US-backed dictator in Egypt. The active intervention of Western powers in the region make it much harder for the people of the Middle East to fight for economic and social justice. The real way for people in the West to support people in the Middle East is to oppose our own government’s violence, like the 2003 anti-war movement that stopped Canada from invading Iraq, and the growing movement to stop war on Iran.

It’s especially important to stop US and Canadian wars abroad, because these are extensions of wars at home. As the Red Nation explained, “We recognize that the United States has been at war since its inception, and, according to its founding document, the Declaration of Independence, it was the ‘merciless savage Indians’ who were the original enemies of empire. Today, there are new Indians but the war remains the same. The war on terror, and all US wars of aggression, are merely extensions of the US settler imperialist project that began with Indigenous genocide.” The same applies to Canada.

The federal Liberal government and BC NDP government were both elected on promises to support climate justice and respect the UN Declaration on the Rights of Indigenous Peoples (UNDRIP). But a year ago the RCMP, with orders to “use as much violence…as you want”, stormed Unist’ot’en camp. This allowed Coastal GasLink to bulldoze through their territories and destroy archaeological sites to pave the way for a massive pipeline through the Wet’suwet’en nation—which will contribute further to climate change. This New Year’s the BC Supreme Court extended the injunction in support of the pipeline. A few days later the Wet’suwet’en Hereditary Chiefs issued an eviction notice to the pipeline company, but the threat of invasion remains.

As the Wet’suwet’en international call for solidarity explained, “We watched communities across Canada and worldwide rise up with us in January 2019 when the RCMP violently raided our territories and criminalized us for upholding our responsibilities towards our land. Our strength to act today comes from the knowledge that our allies across Canada and around the world will again rise up with us, as they did for Oka, Gustafsen Lake, and Elsipogtog, shutting down rail lines, ports, and industrial infrastructure and pressuring elected government officials to abide by UNDRIP. The state needs to stop violently supporting those members of the 1% who are stealing our resources and condemning our children to a world rendered uninhabitable by climate change.”

In the morning of January 7, 29 youth occupied the offices of RBC, the financial advisor to Coastal GasLink. At the same time, Artists for Climate and Migrant Justice occupied the lobby of the Royal Bank Plaza South Tower, where they performed a wedding between the Canadian state and the extractive fossil fuel industry. A half an hour later, climate and Indigenous activists occupied the Toronto office of Alberta Investment Management Corporation, AimCo, one of the top shareholders and financiers of the pipeline, in the First Canadian Place. Then at noon, hundreds joined a rally and march through the financial district to expose and oppose all those who profit from climate injustice.

With the inferno in Australia showing the growing reality of climate chaos, wars for oil and by oil must be stopped. We urgently need a world of peace, self-determination, and climate justice.