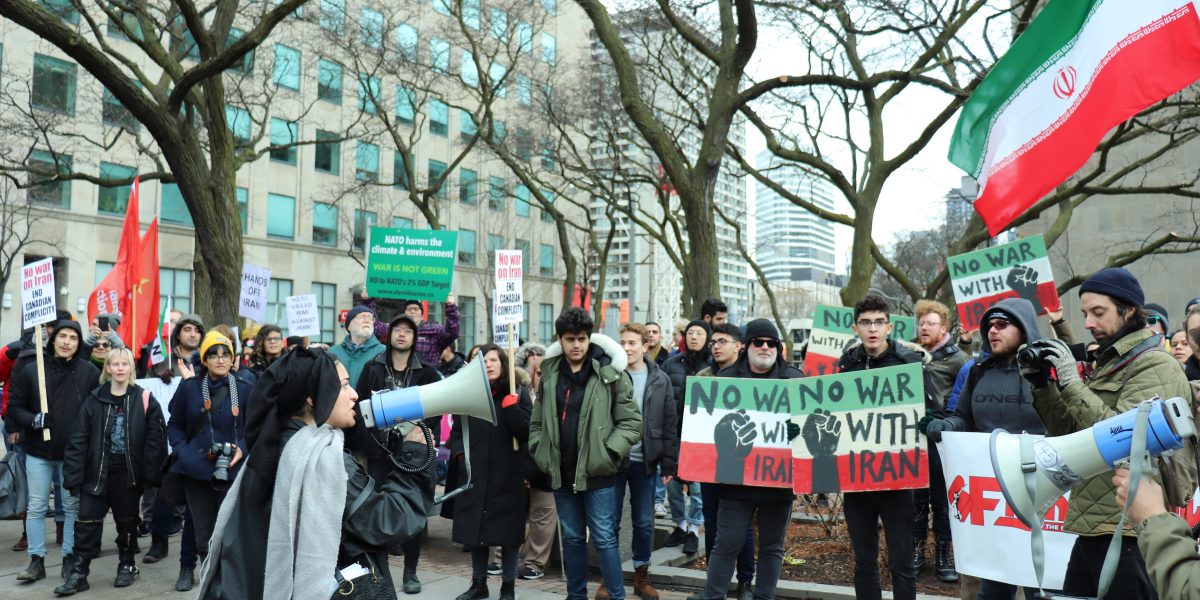 With barely a day’s notice, hundreds of people joined an anti-war protest in Toronto to oppose the looming US-led war on Iran. Organized by a group of Iranian-Canadian activists and anti-war allies, the protest took place opposite the US Consulate on University Avenue and heard from about a dozen speakers, including representatives of the labour and students movements and a number of national liberation struggles.

The central demand of the rally was to oppose war and sanctions on Iran. The most popular slogans included:

“United we stand: No war on Iran!”

“Who pays the price for war? The working class and the poor!”

Rally organizer, Saman Tabasinejad, opened the protest with a land acknowledgement and a call to solidarity with Indigenous struggles across the country. Murat Ulutas provided drumming, while Sienna Che led the crowd in anti-war chants.

Saman closed the rally with a rousing speech about the impact of war on those who experience it directly and about the urgent need for activists outside Iran to build a mass movement to oppose the US war drive:

“There are 300,000 Iranian-Canadians in this country. They are your neighbours, they are your friends, they are your colleagues, and their hearts are aching for their homeland. And this is a community, which includes myself.

“So I want you to remember that when you are having these conversations. The reality is we overwhelmingly oppose war because we know what it’s like. We’ve been there with the Iran-Iraq war. We see what’s happening to our brothers and sisters in Afghanistan, in Iraq, in Yemen, in Syria. We know the reality of war.

“And I’m looking forward to seeing a powerful anti-war coalition of progressive organizations, of labour, of the Iranian-Canadian community, develop and oppose this and any war that the global coalitions of fascists, liberal interventionists, and neo-cons try to throw us into.

“This is just the beginning. We know this is where we start. We start here. And we talk to our friends, we talk to our colleagues, to our family members. And we remind them what war really means, what the cost of war really is. Because in a different lifetime, they might have been there. They are made of flesh and blood just like everyone else in the Middle East and across this world. We are all made of flesh and blood….

“We don’t stop. We don’t wait for the next attack to react. We do it consistently. We grow, we build coalitions, and we build solidarity. ­­­­I will be here the day the war starts to say no. To tell America, who’s right over there: No! Because the people they are bombing have lives: they have families and friends, they have hopes and desires, and they have futures. And we’re not letting them rob anyone of their futures anymore.”

At the end of her speech, Saman also made two key announcements:

First, the next city-wide anti-war rally will take place on Saturday, January 11 at 12:00 p.m. in the same location as today’s rally, the US Consulate, 360 University Avenue (TTC: St. Patrick or Osgoode | map). Saman called on participants to use this week to mobilize an even bigger crowd for next week.

The rally concluded with a song by Sienna Che and more chanting from the crowd.

During the rally, Spring magazine interviewed a number of participants, asking them two questions: Why are you attending today’s rally? And, what do we need to do to stop the war?

Thanks to everyone who participated in the interviews, which appear below.

Nigel Barriffe is a teacher in Toronto and a member of the Elementary Teachers’ Federation of Ontario.

“It’s very important for teachers to be here, to fight against wars that take up resources and money away from students, for things that kill people.

“We need to use our privilege to call for peace now.”

Yusur Al-Bahrani is a writer, activist, and member of Canadian Voice of Women for Peace.

“I want peace. War is a disaster for all sides and adds to the chaos in the region, and civilians can’t afford that. An impeached president is creating a disaster.

“We need rallies and for people to tell their MPs: ‘we don’t want this war.’”

Kim Koyama is a member of Japanese Canadians for Social Justice.

“It is more important than ever to stand against war, while so many forces are pushing us in that direction towards war.

“The common people need to stand up and send a message to Trump that we will not be his doormat.”

Melissa Weald is a member of Canadian Voice of Women for Peace.

“We need to educate people on how to end war, through non-violence training, and especially having empathy for each other.”

Greg Cook is an advocate for homeless people in Toronto.

“It’s the right thing to do. Canada and the US have to stop imperialist wars and killing thousands of people, all for oil.

“We need to do a lot to win! The mainstream media is complicit in dehumanizing ‘the other,’ those in the Middle East, which serves those in power.

“We need protests in the streets, have direct action, and advocate with our political leaders.

“I wish more people in Canada would recognize what is happening in Iraq with ‘our tax dollars,’ and how US policy affects our lives.”

Kayla Weiler is the Ontario representative on the National Executive of the Canadian Federation of Students.

“We’re here to represent the student voice. Students are harmed when wars happen because the government spends so much on war, not education.

“They are spending about $20 billion on the military, when $10 billion would provide free tuition for all, from undergraduates to Ph.D. students, and that would cover both international and domestic students.

“Students have historically opposed wars, from the invasion of Vietnam to the 2003 protests, so we are part of that tradition.

“Divestment is also important, divestment from the fossil fuel industry, that is so closely tied to war, and from weapons manufacturing. Funds should go towards students, not war.

“So students should put pressure on their educational institutions to divest from these industries.”

The feature photo was taken by Tom Murphy.