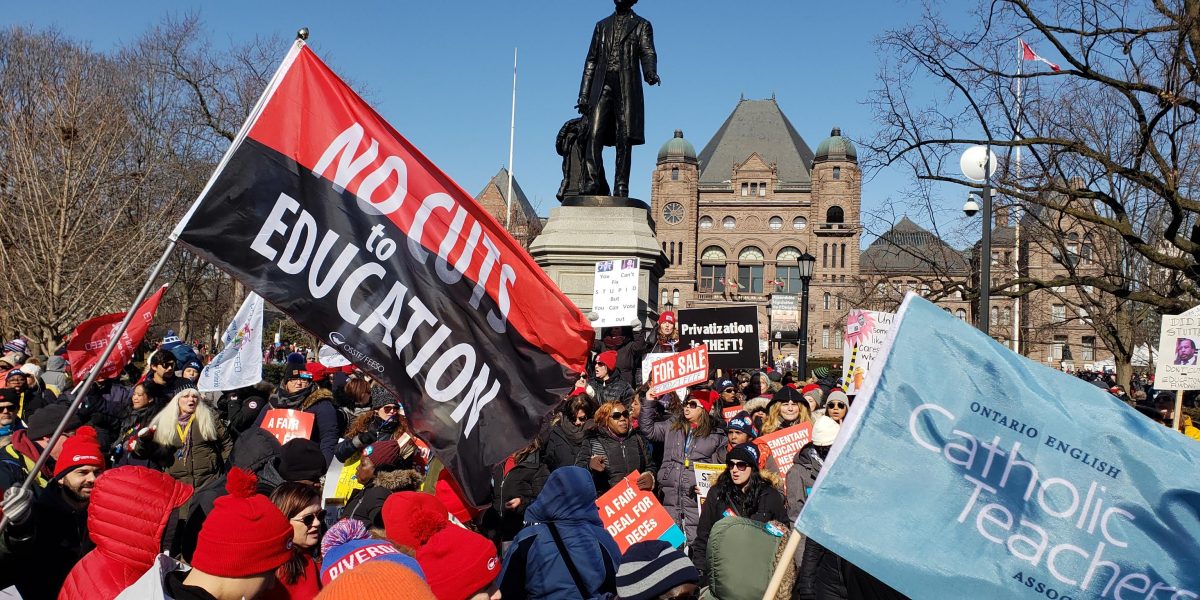 Over 200,000 educators from the four main education unions in Ontario came together on February 21, 2020, to say “No to Tory cuts.” Joint actions took different forms across the province, including tens of thousands of educators rallying around the legislature, Queen’s Park, in Toronto. Spring Magazine asked several strikers why they were striking and what they think they need to do to win.

It has taken us a long time to grow. This didn’t start gang-busters year one, like everybody knew what we were doing. It feels like we’re finally in a place where we are grooving, working well together. The  public and the boards (of education) understand the model and are giving us the support we need. So to see the potential of that being ripped apart is heart-breaking, especially for those of us who have been here since the beginning.

So we’re fighting on this historic day with our teacher counter-parts, which is a historic first for us (we are the Catholic ECE workers), so this is amazing for us. We have children with special needs who need our services in kindergarten. We are concerned about class sizes too. Cuts to programs are already taking effect. People might think this is some future scenario but we’re trying to get things back. Things have already receded.

In order to win, it will take a government that understands education. This government doesn’t. We have a Minister of Education who went to private school and his Deputy Minister was home-schooled. They have no experience with publicly-funded education, so how are you making decisions? It boggles the mind.

We need public support. We have parent support and we need that to continue because they’re the ones who are really going to raise us up.  We need to rally together to restore what has already been cut. Seeing all of this today is incredible. Seeing all four of us (unions) together is historic.”

“We are here to tell the Ford government that we will not take the cuts that they are offering at the table. They keep on saying they are making huge investments in education. But that’s not true, they’re actually cutting a lot more than $1.6 million. They won’t say they’re for larger class sizes or more e-classes (online). They’re lying in the media all the time so we’re saying today that has to stop.

Doug Ford and Lecce need to listen to the people, listen to the parents and this crowd. All they have to do is back off from their cuts or even have a new education minister. We need to stay united, stay strong, and stay focused on what our goal is. It is definitely not  about salary; we already took a 2.5% cut from our strikes, so it’s not about salary. It’s not true what they’re saying in the media.

Another ETFO member, Jenny, said “I’m scared about cuts to full day kindergarten.  I’m here to tell the Premier and Lecce that I won’t accept it. Early childhood education is so, so important to a successful education. Why should kindergarten suffer? They should find the money somewhere else.”

“I’m here in support of education and because teachers are standing up, as well as education workers, to oppose the cuts the government is trying to implement. I’m frightened about what could happen if these cuts take place, especially the mandatory e-learning courses, as well as increasing class sizes.

It’s going to take a lot more pressure from the public. Parents are on our side according to surveys taken by the TDSB (Toronto District School Board). Parents have also come out to say they are against e-learning as well. The government has to listen and that’s the only way. We need to go back to the bargaining table.

The crowd here is fantastic. It just shows that so many people are in support of the teachers and how education should be, and not for the cuts against education.

Another OSSTF member, Suzanne, added “I saw a sign that said ‘Rich Man, Poor Choices’ and it made me angry. (Education Minister) Lecce went to private school. He doesn’t have any reason to care about public schools. Now he wants cuts from public education; why doesn’t he cut those private school tax credits instead?”

“We’re here to show the government’s proposed cuts will impact the kids and hurt their future. They haven’t been listening at the negotiation table, so we have to escalate to a higher level. So we’re here at their doorstep showing them that their cuts are going to cause permanent “leaking” (Lecce) from Lecce, so it’s not going to be good for the future.

I see the government is really entrenched. What we’re doing now, all the solidarity, all the different unions, is a step in the right direction. We’re raising our fist to fight the power.

We’re all teachers but this group of us here are also into hip hop, as dj’s, producers, rappers, graffiti artists – we’re called “Head-ucatorz”.  You can Google us or go on Youtube. We did a song called “Each one teach one”

“We set up a kids and family zone with hot chocolate and sign-making. Our role is to encourage and bring out family and community members, parents with their kids, to stand in solidarity with our education workers who are doing a gigantic picket today. And to show the government that we’re all united to say stop the cuts.

To win, we need an ever-growing movement of solidarity, and momentum that involves more and more and more people. So that’s why we’re expanding our network. We’re getting in touch with parents across the province. We’re working within each school with each parent council. We’re creating relationships with our teachers and education workers. And we’re expanding that. We’re talking to nurses and all sorts of community partners. And that’s what I think it’s really going to take – a really strong, broad, united force to turn this tide.”

“We’re here for three big points. The first is online learning, as a lot of students can’t do it. We’re also here for class sizes. We are also concerned with the amount of violence especially in the elementary grades.

I’m hoping this demonstration will make people listen. But we’ll see. We’re committed, morale is high and we’re committed to walking out every week, every day, until it’s resolved.”