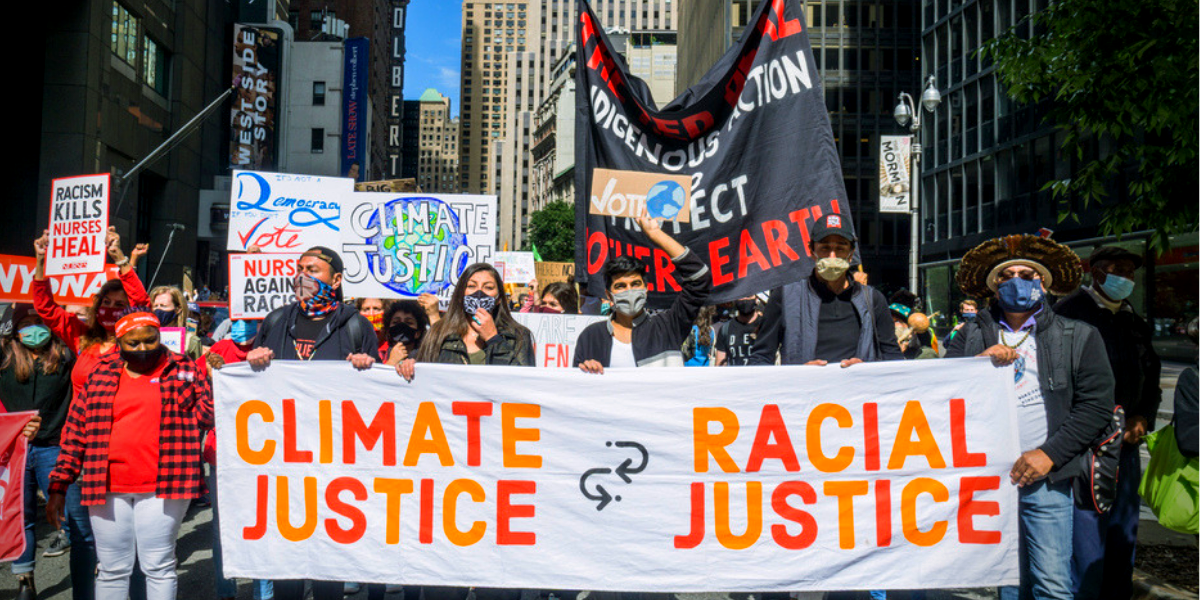 Until a year ago the climate justice movement seemed to be building from strength to strength, from the global climate strike and widespread discussions of a Green New Deal in 2019, to mass rallies in January and February of 2020 against the Canadian state’s invasion of Wet’suwet’en territory. But the COVID-19 pandemic made climate action and sovereignty efforts more difficult and added new stresses to the landscape of political activity: while social distancing measures disrupted mass climate action, pipelines expansion was deemed “essential” and continued. This accompanied austerity measures and unsafe working conditions, so the climate crisis is linked with the economic and health crises.

And so, it is important to take stock of the climate justice movement at the start of 2021. Where did it come from and where is it going? We need to acknowledge and learn from the victories, study and discuss potential fault lines, and consider which steps can take us towards creating a planet that puts people over profit. Much like our activity with decent work, police/prison abolition and other anti-oppression campaigns, we see how connected the struggle for climate justice is with others.

For years the mainstream environmental movement was dominated by a focus on individual “lifestyle changes” that of middle-class advocates with the means to shop for the future they want within the system. But in the past decade Indigenous sovereignty movements have shifted the focus to climate justice, considering the disproportionately negative impact of global warming on racialized and marginalized groups.

Climate change is being most felt by those on the frontlines. Indigenous women and other land and water defenders have been involved in these struggles since the start of colonization, and we must understand that it is their leadership which must be supported and followed. As Indigenous author and activist Nick Estes wrote in 2016, “Climate change, because it envelops the entire planet, makes all life precarious. Poor, oppressed, and Indigenous peoples, however, bear the brunt of rising seas, record droughts, and abnormal weather patterns. As Native people, our kinship with human and nonhuman relatives is fundamental to our being.”

Indigenous people of Turtle Island are feeling the destruction the heaviest but are also at the forefront of fighting against injustice. As a result, the new rise of the climate justice movement we are seeing is necessarily linked with de-carbonization with decolonization.

COVID-19 initially disrupted mass protest, but the resurgence of Black Lives Matter and rising call to defund police strengthened the connection between climate justice and abolition. This is essential to support Indigenous sovereignty movements resisting attacks from the Canadian police, from Braided warriors to 1492 Land Back Lane. Climate change and systemic racism are two heads of the same colonial coin that is the Canadian state. To tackle climate change, we must also address the racism that our structures are built from.

Climate justice also recognizes that the climate crisis cannot be addressed without considering the economic and social crises we face, such that the fight for economic equality and anti-racism are intertwined with a sustainable future. While the pandemic disrupted discussions about a just transition away from high-carbon jobs, it highlighted the essential work of existing low-carbon jobs—from farm workers and grocery workers, to transit workers and care workers. The movement for decent work that has expanded through the pandemic—for status, higher wages and paid sick days—is essential for a just transition.

Just transition: from slogan to reality

While the recognition in the Green New Deal and exhortations that “no worker left behind” are admirable, we need to do a reality check on where the working class stands with respect to climate justice. Professor Dimitris Stevis from Colorado State University has written extensively on the topic and has documented the positions of various unions and sectors. His findings show that calls for climate justice and changing to a fossil-free economy have their strongest support in the health, education and social service sectors (like CUPE and CUPW in Canada) and the least support in the construction trades and fossil fuel sectors.

This is rooted in the experience of workers. As Sara Nelson, president of the Association of Flight Attendants-Communications Workers of America, told In These Times:

“First and foremost, there has to be a recognition that labor has never seen an actual ‘just transition.’ You can say those words all day long, but what people hear is ‘a couple hours of training and then you’re going to leave my community devastated and alone—like a ghost town.’ So, there’s zero trust. If you want to build trust, you need to do two things. One, you need to shore up the wasteland that’s already been created where there was no just transition…Second, a just transition needs to talk about how we start the transition process early. We need to get into these communities, talk with them about their needs, and get to know them.”

It is unfortunate that labour officials are showing no leadership, no big climate justice campaigns, that can both support and draw in activists from many sectors. This is one of the biggest objective challenges we face, and it is not helped by the relative weakness of the environmental movement (both traditional environmental non-profits and grassroots groups). While it is true that the COVID-19 pandemic has dealt a blow to the momentum of the mainstream environmental movement, there are strong calls to have the post-pandemic economy lean on a fossil-free future. There have been, however, some strides being made to address this. The Labour Climate Forum, to be held on April 10th, will feature key labour activists in sharing their vision for a Green New Deal.

Renewing and strengthening the movement

One of the most exciting parts of the climate movement over the past few years has been the massive influx of both new and young activists. Our Time, FridaysforFutures, the Sunrise movement, and XR to some extent, have brought the climate movement to thousands for the first time. This massive influx introduced so many new ideas, energy, and some ‘new blood’ that every movement requires to remain relevant and a threat to the status quo.

But many new climate activists have been demoralized by both the material realities of COVID-19, as well as the very quick downturn in activity the climate justice movement faced because of it. The pandemic stopped the momentum of the climate justice movement. This was not helped by the reality that, at local levels, climate groups are small, fragmented, and not always meaningfully linked to labour and Indigenous sovereignty and anti-oppression struggles. And if those involved are new to activism in general, they may not be aware of these struggles or how to support them.

But the pandemic has not destroyed the movement. People are still angry as hell with decades of neoliberal cuts to services, with stagnant low wages, with precarious jobs. They are still fed up with murderous police running rough shod through their neighborhoods. They are still fed up with continued willful ignoring of treaty rights and broken promises around reconciliation and colonial systems. Though still re-gaining its numbers, climate justice groups from all over Turtle Island are re-focusing and beginning to link together.

We cannot rely on capitalism to fix the problem that it is willingly and happily creating while millions suffer. And fortunately, we are all continually rising up in different ways. From the growing divestment movement, to increased pressure on labour, to ongoing work being done by land and water defenders on the frontlines. As Elena Ortiz wrote earlier this year:

“We are the caretakers of the land; we are the farmers. Time and history have shown that what creates crisis cannot solve it. The solutions and answers we seek exist with we, the people. A new President in Washington is not the answer. Replacing one anachronistic administration with another will not save us. A Native woman as Secretary of the Interior will not heal the earth. In order for our planet to live, capitalism must die.”

Our task is to support these movements, to take part and build them, to link them together, to amplify their voices, all for the purpose of highlighting the common enemy as capitalism and building the confidence to overthrow it. If we want climate justice, we need to be part of the fights that are happening in the here and now and seek to unite and mobilize for the future.