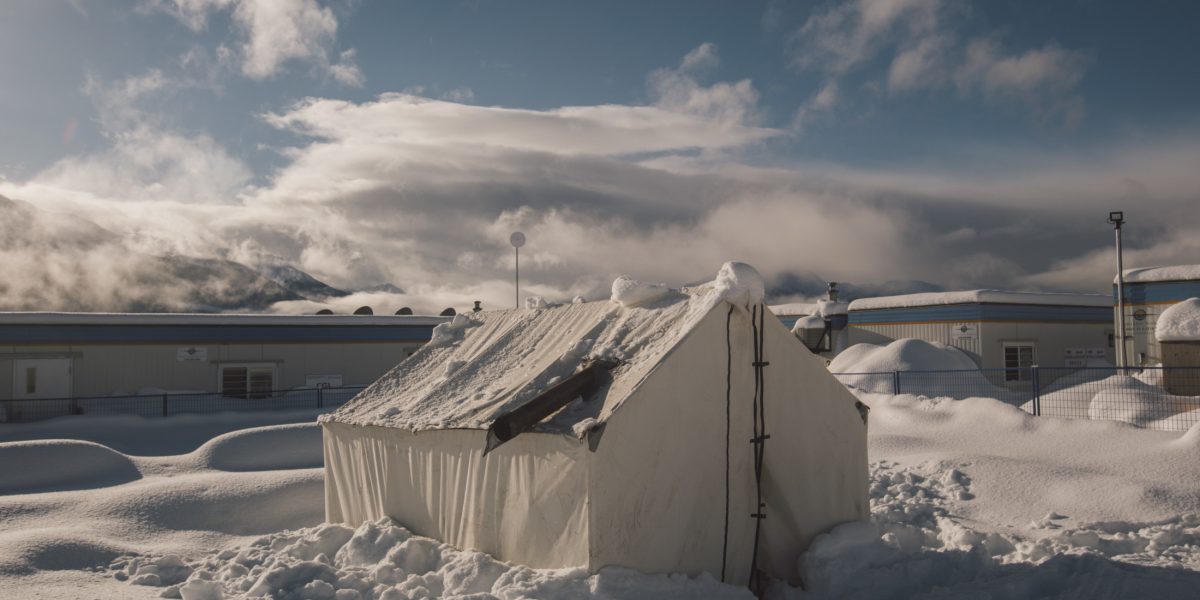 A new outbreak of COVID-19 has been detected at the LNG Canada facility in Kitimat, as well as two confirmed cases at Coastal Gaslink Camp 9A, located on Unist’ot’en yintah. Two Ts’ako ze’ (female chiefs) have issued a letter to BC’s Provincial Health Officer, Dr. Bonnie Henry, urging her and the BC NDP to remove oil and gas work as essential services and stop work immediately.

While oil companies continue to push through destructive projects and expansions, workers are being forced to work in increasingly dangerous circumstances without paid sick days and having their pandemic pay stripped away.

The Coastal Gaslink pipeline project continues despite missing the hereditary consent of the Wet’suwet’en nation. We know that LNG is not the ‘green’ energy project that Canada needs. No accord or climate action plan undertaken or discussed by the Canadian government has ever properly address climate change as well as indigenous sovereignty. This is because they don’t address the overlying problem of capitalism. Driven by ruthless competition and the need to turn a profit, capitalism pushes firms to exploit workers and the natural world. The CGL pipeline is such a project that puts profits ahead of workers’ safety and Indigenous sovereignty.

Not only are man camps ill-equipped to provide isolation to COVID-positive workers, CGL’s private security contractors as well as the RCMP have been documented dealing with community members without wearing proper PPE or observing distancing rules. These poor practices are making the entire situation increasingly unsafe. The conditions outlined in the letter, as well as the dangers presented by man camps in the The Final Report of the National Inquiry into Missing and Murdered Indigenous Women and Girls, have been known since the start of this project, and have only been made more dangerous since the start of the pandemic. In late March, Dr. David Bowering, former Chief Medical Health Officer for Northern Health, urged the province in an open letter to “immediately shut down the industrial work camps… The camps are and will be COVID-19 incubators placing the workers, the host communities , and the home communities of the workers at unacceptable risk.”

The letter issued by two Ts’ako ze’ on November 30 makes three main arguments against the continuation of the CGL pipeline. “First, the economy cannot come before Indigenous lives; second, the protocols in place do not protect our most vulnerable communities; and lastly, our Houses and Clans have a right and responsibility to make decisions about what happens on our territories.”

An open letter, with over 500 signatures, from front line health workers echoes many of the same concerns:

“We unequivocally support the recommendations in their letter to you, addressed on November 30, 2020 – the same day that Mary Ellen Turpel-Lafond released her report ‘In Plain Sight’ on the widespread and deadly racism and discrimination experienced by Indigenous peoples in the health care system in B.C. … As health professionals working on the frontlines, we see first hand the brunt of the devastation caused to communities by the dual public health emergencies of the climate crisis and COVID-19 pandemic – which both disproportionately impact Indigenous communities.”

Janitorial staff at the Kitimat site have also gone public with concerns of low pay and poor safety protocols and equipment. The staff are contracted by Dexterra. Employment is generally through two-week schedules, though many are choosing to stay onsite in order to protect their home communities. Workers are saying that Dexterra have failed to provide adequate PPE and continues to expect travel to and from worksites in 8-person vans. Workloads have been forced to increase without new supplies or staff to accommodate the demand. The Tyee was able to interview some of the janitorial staff, with one reporting, “management knew about this problem. We brought it up numerous times. Some of our older co-workers, how long can they take this? It’s a backbreaking job.”

It has become more clear that we need to collectively move away from pipelines and the harm they bring. In order to properly respect Indigenous sovereignty, stop climate change, and protect workers, the answer is clear: stop work on the Coastal Gaslink and stop capitalism. The question should not be ‘how do we make capitalism less destructive,’ but ‘how do we stop capitalism before it destroys even more?’

To support the ongoing work of the Unist’ot’en Camp, please see the detailed list of actions in the Supporters Toolkit. We also need to make sure that all workers are protected through campaigns like Paid Sick Days for all. We need to implement practices that support workers, strengthen communities, and protect the planet.