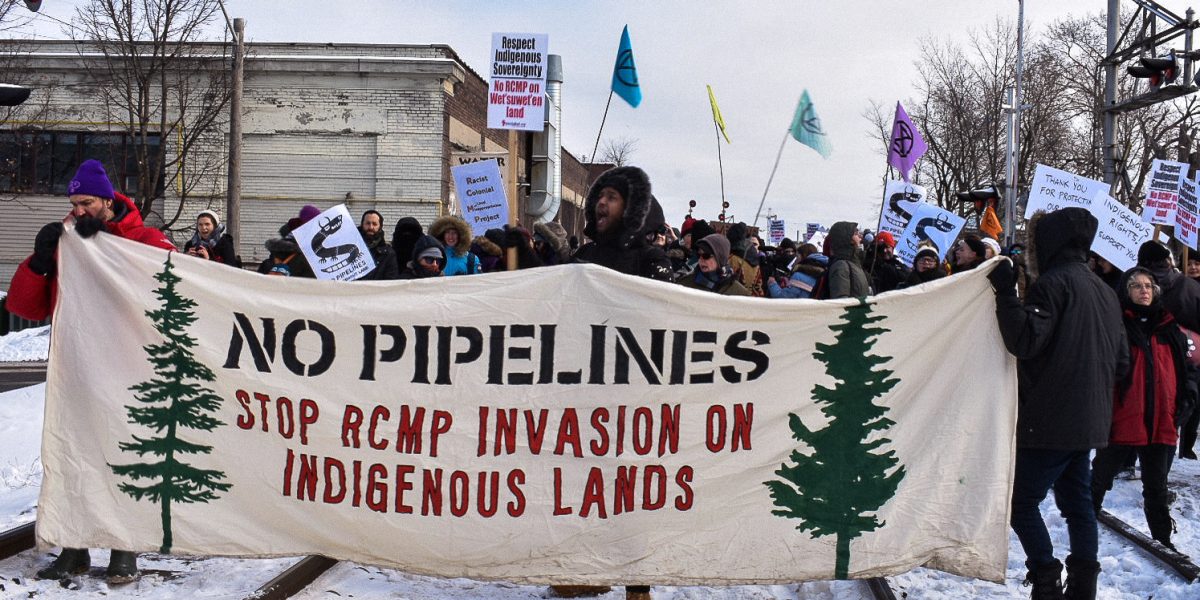 Nearly 400 protesters in Toronto responded to the Wet’suwet’en call to shut down Canada by blocking a rail line. Protestors chanted, “when justice fails, block the rails” and “shut down Canada!” as they forced CP Rail trains to turn back.

Vanessa Gray of Idle No More told Spring Magazine: “We are here to shut down the tracks in solidarity with everyone else shutting down Canada today. We demand that the RCMP stands down. We need to keep taking action until we can assert the hereditary chiefs’ demands and ensure that our land defenders are safe.”

Dhunna explained that the Wet’suwet’en are resisting one of the largest fossil fuel projects on unceded land. “If we want to transition into 100% renewable energy economies, we must put our political and collective weight behind the struggle for Indigeneous sovereignty and self-determination,” said Dhunna. “The Wet’suwet’en clans have been waging this struggle against extractive capitalism for a very long time, and we have to show up for them.”

On February 6, six land defenders were arrested in a pre-dawn raid by a militarized RCMP force. RCMP vehicles breached the Unist’ot’en gate at 39km with a convoy of vehicles and armed officers. The RCMP established a new exclusion zone and denied entry to land defenders, their supporters, and journalists.

Alie Hermanutz, an organizer with Rising Tide, one of the main groups behind today’s blockade, said, “We are shutting down the CP Railway which is one of the corporations that will be contracted out by TC Energy for the Coastal GasLink pipeline project to transport the actual pipeline infrastructure from Alberta to British Columbia.”

Hermanutz added that non-Indigeneous activists in support of the Wet’suwet’en must employ a diversity of tactics with a focus on direct action as a way to stop the flow of capital, especially in the oil and gas sector. “We also need to do what Wet’suwet’en land defenders and hereditary chiefs have asked: they’re telling us to occupy offices of Ministers who are involved, raising awareness about settler-colonial violence, and fundraising for their legal defence,” said Hermanutz.

Caron explained, “when you are violently removed from your land and disconnected from your culture, language and spiritual practices it is impossible to thrive.” She insisted that, “as settlers it is our responsibility to put our bodies on the line to support the Wet’suwet’en.”

Damey Lee, a migrant justice activist , said, “no anti-capitalist politic is meaningful without an anti-racist, decolonial framework. As settlers, we have the responsibility to centre Indigenous sovereignty in a real nation-to-nation relationship.”

In April 2016 Canada officially adopted the United Nations Declaration on the Rights of Indigenous Peoples (UNDRIP). Last year, the British Columbia government officially implemented the declaration into its law. UNDRIP establishes the principle of “Free, Prior, and Informed Consent” (FPIC) on all resource projects affecting Indigenous peoples.

“Both the federal and provincial governments are hypocritical,” said Gray. “The settler-state is not interested in a real nation-to-nation relationship.”