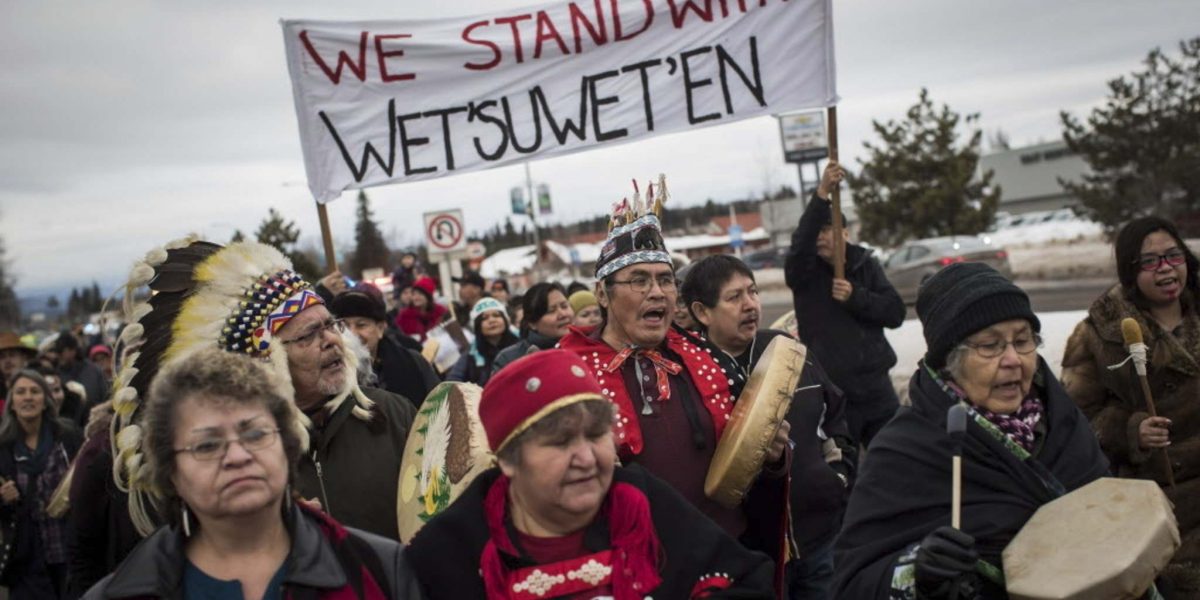 Six days ago the Unistoten dispatched an urgent appeal warning that the RCMP had set up an “exclusion zone” that embargoed food, land defenders, and the media from entering Wet’suwet’en territory. The blockade arises in the backdrop of the revelation that RCMP commanders, in consultation with TC Energy (the pipeline company formerly known as TransCanada), considered killing Indigenous protestors to enforce a court injunction.

Although no lethal force was eventually used, the RCMP arrested 14 protestors and like an occupying army deployed armoured vehicles, helicopters and drones one year ago. They hired a private intelligence company to conduct surveillance on the Wet’suwet’en. The Mounties’ response is consistent with Canada’s broader state policy of violently asserting sovereignty over Indigenous peoples and their lands.

In 2019, British Colombia became the first provincial jurisdiction to incorporate UNDRIP into its law. International law becomes domestic law when it is implemented through federal and provincial legislation. Today, Trudeau maintains that pipeline builders have met their obligations despite unanimous Wet’suwet’en rejection of all pipeline projects running through their territory. Meanwhile, the BC government authorizes TC Energy to bulldoze through Wet’suwet’en territory, contradicting the principle of “Free, Prior, and Informed Consent.” John Horgan, British Colombia’s NDP premier, rejected calls by the hereditary chiefs for nation-to-nation negotiations about the pipelines.

In 1997, the Wet’suwet’en won a historic Supreme Court case in Delgamuukw. The Delgamuukw court recognized that Indigenous title, ownership over their land, is inalienable and existed prior to colonial contact. That legal principle and the role of hereditary governance was affirmed by the Supreme court in the 2014 Tsihlqot’in decision. The hereditary systems are historic legal, social and economic governance institutions found in Indigenous territories. In the case of the Wet’suwet’en, its hereditary system consists of 12 houses that are organized into five different clans governing different parts of Wet’suwet’en territory. All five clans of the Wet’suwet’en have rejected pipeline proposals.

The Wet’suwet’en never ceded their claim to the land. The hereditary chiefs are concerned by the ecological impact of pipeline construction through the Morice River and its consequences on Indigenous hunting, fishing and trapping. Trudeau and Horgan’s disrespect for Wet’suwet’en sovereignty exposes a deeper wound that stretches back hundreds of years to the beginning of European settlement.

European settlers brought a policy to extinguish the ‘Indian problem.’ The first residential schools opened in the 1870’s, and the last finally closed its doors in 1996. The goal was to “kill the Indian in the child” through forced assimilation into the settler-state.  When the parents of Indigenous children refused, the RCMP showed up. Today, Indigenous people make up 5% of Canada’s population but more than half of all child welfare cases, while more than a quarter of adults locked up in Canada’s prisons are Indigenous. The impacts of inter-generational trauma and colonization run deep. We have seen crisis after crisis where Indigenous youth like Colton Bushie are murdered with impunity or take their own lives in desperation.

There is a word meant to define actions that destroy the essential conditions of the life of national groups: genocide. Genocide scholars have asserted that genocide can involve both mass annihilation and slower, but equally deliberate policies designed to bring about the destruction of a peoples national existence. The destruction of Wet’suwet’en ecology constitutes structural genocide, aimed at destroying a people’s cultural identity and means of livelihood. When we take the entire gambit of Canada’s state-building project into account, we can see that the standoff with the Wet’suwet’en fits into a broader history of colonial violence aimed at dismantling their distinct identity as a nation marked by languages, cultures, spiritual beliefs and historical ties to the land.

The Canadian state’s genocide is ongoing, perpetuated by policies like the chronic underfunding of Indigenous children in child welfare (Indigenous people won a years long legal battle before the Canadian Human Rights Commission, but the Federal government is fighting the decision in federal court instead of spending the money on Indigenous children). Indeed, the National Report on Murdered and Missing Indigenous Women and Girls reveals Canada’s role in perpetuating a “deliberate race, identity, and gender based” genocide against Indigenous peoples. The calls to actions in that report–not merely recommendations– focus on nothing short of decolonization aimed at dismantling “the forces of colonialism and to re-establish Indigenous Nationhood.”

The RCMP standoff with the Wet’suwet’en compels us to confront genocide in the here and now. Indigenous people have resisted attempts by the Canadian state to wipe out their national existence over hundreds of years. The Wet’suwet’en are holding their ground against Canada’s arsenal of settler colonialism and capitalist expansion. Our political leaders must stand down and respect the principle of “Free, Prior and Informed Consent.” Genuine reconciliation, a nation-to-nation relationship, is built on nothing less than decolonization and respect for Indigenous sovereignty.

To find out more about how you can stand in solidarity download the Wet’suwet’en Supporter Toolkit 2020.