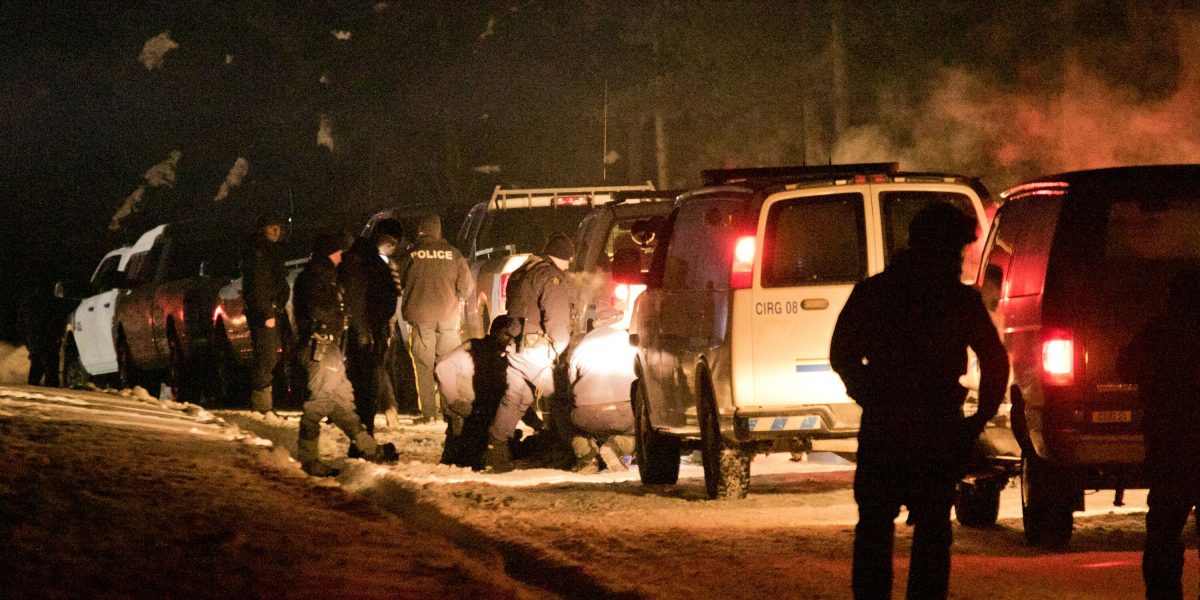 The RCMP, acting on behalf of the Canadian state and Coastal Gaslink, have arrested six individuals at the 39 KM mark, a supply zone outside of the injunction area. The RCMP are continuing to build their presence and enforce colonial rule at other known camps and locations in the territory. “They’ve got guns on, they’ve got tactical gear on. They look like they’re ready for war,” said hereditary Chief Woos.

On Thursday afternoon, helicopters were spotted circling at 44 KM and machinery has been been visibly. Wet’suwet’en and supporter have closed the road behind the police who are approaching 44 and more support is gathering at the entrance to the Morice Forest Service Road. The 6 people arrested in the pre-dawn raid are refusing to sign unjust conditions of release and are being held in custody.

As laid out in the terms of the injunction, media access is being turned away at this time, and only officers as well as council members and hereditary chiefs are being allowed through: “The exclusion zone’s purpose is to temporarily create an area where police and Coastal GasLink work can safely operate to deploy heavy machinery and equipment needed to clear hazards and re-establish access as intended by the Court.”

As RCMP escalated action on Thursday afternoon, the Wet’suwet’en hereditary chiefs began steps to launch a court challenge against the pipeline’s environmental approval. The challenge is asking for a judicial review of the B.C. Environmental Assessment Office’s decision to extend an environment certificate for the pipeline by five years.

On the morning of February 6, Assembly of First Nations (AFN) National Chief Perry Bellegarde released a statement condemning the Canadian government and the RCMP:

“I am urging peace and I condemn any acts of violence in enforcing the injunction brought against the Wet’suwet’en Hereditary Chiefs and their supporters. The use of force against peaceful people is a violation of human rights and First Nations’ rights. The RCMP is sworn to uphold Canada’s law, but Canada must respect First Nations laws and Wet’suwet’en laws. Canada’s highest law – the Constitution – affirms in section 35 the inherent rights of First Nations and our right to self-determination.

We will never achieve reconciliation through force. If this is really about the ‘rule of law’ then governments should be honouring the rights and title of First Nations in their traditional territories. The only way to resolve this is open dialogue amongst all parties, including dialogue with and within the Wet’suwet’en Nation. Going forward, we need to work at implementing First Nations laws as equal to common law and civil law.

The AFN supports the governance and decision-making process of the Wet’suwet’en leaders. Canada and B.C. should do the same.”

Please do what you can to support the Wet’suwet’en at this time. Actions have been called all over Canada, and the world. Some of these actions have been aggregated on Facebook here. There are also strong calls to spread awareness of the issue and let officials know that you are demanding an end to the ongoing violence and genocide faced by the Wet’suwet’en people.