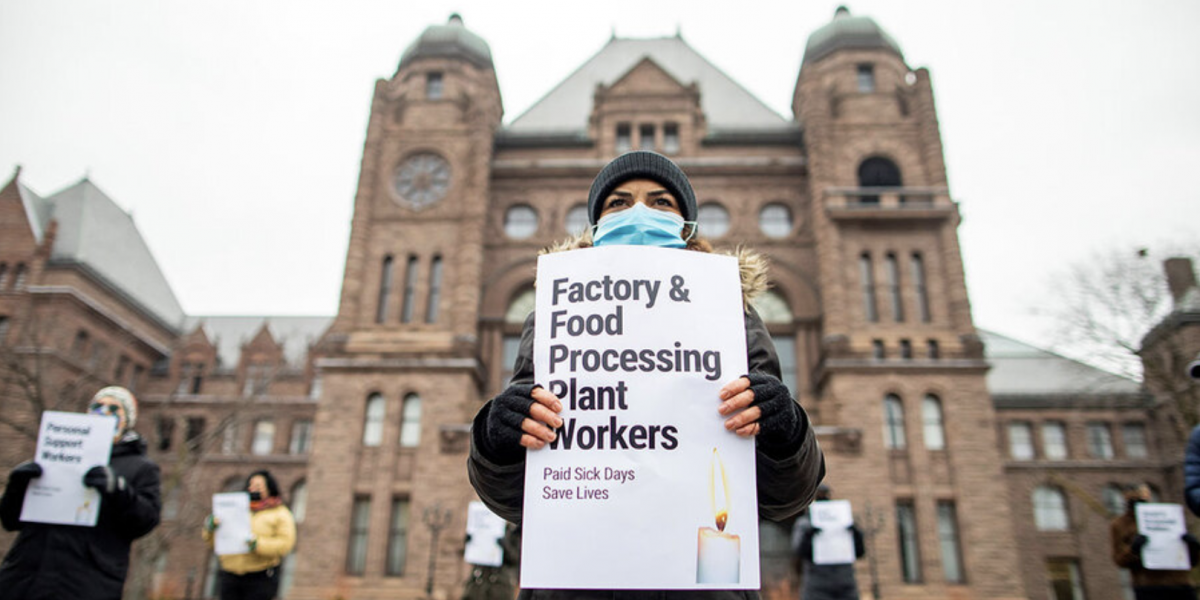 On March 1 Doug Ford’s Conservative government in Ontario voted against paid sick days, in the middle of a pandemic. Tabled by NDP MPP Peggy Sattler, “Bill 239: Stay Home if You Are Sick Act” would have amended the Employment Standards Act to provide 7 permanent paid sick days and 14 additional paid sick days during emergencies. It’s become abundantly clear that precarious work is driving the pandemic, and that the denial of paid sick days disproportionately affects women, racialized and migrant workers, and people with disabilities. Legislating paid sick days is an urgent issue of public health and equity.

It’s rare for a bill to reflect a movement demand as clearly as Bill 239. This provides an opportunity to look at how the movement created the conditions for the vote, how the vote revealed the current balance of forces, and how the fight for paid sick days will continue beyond the vote.

The demand to legislate paid sick days for all was advanced for years before the pandemic. In 2015, members of the Workers Action Centre and the Decent Work and Health Network met with the Liberal health minister to present a petition from nearly a thousand health providers demanding 7 permanent paid sick days for all workers, as well as job-protected emergency leave and an end to sick notes. At the time the need for paid sick days was being advanced by workers, echoed by progressive health providers, but largely dismissed by media, politicians, and mainstream medical organizations.

After two more years of organizing, the decent work movement won partial gains. While the movement in Ontario demanded 7 employer-paid sick days for all, the NDP supported 5 and the Liberals legislated 2. Despite a corporate Liberal government in power, the Fight for $15 and Fairness in Ontario was able to win 10 job-protected emergency days (the first two as employer-paid sick days), and an end to sick notes, along with legislation to raise the minimum wage to $15 by 2019. In BC, on the other hand, the NDP was elected but without a strong movement on the ground, so paid sick days were not legislated and the $15 minimum wage wasn’t promised until 2021.

While the movement in Ontario made advances, it was not strong enough to defend them. Ford was elected on a promise to be “for the people” and “end hallway medicine”, but instead he froze the minimum wage, cut paid sick days and brought back sick notes. The Conservatives felt confident to attack paid sick days, with Minister of Economic Development Todd Smith claiming workers had abused them and caused an epidemic of “Superbowl flu.” At the time, Conservative politicians were united, the Ontario Medical Association spoke out against allowing employers to require doctor’s notes but ignored the cut to paid sick days, and there were no open letters from mayors or medical officers of health.

While the movement could not defend paid sick days provincially, it had built public support with 77% of Ontarians supporting paid sick days. Organizing efforts and broad  support did translate into continued gains: the federal government legislated 3 employer-paid sick days for federally regulated workers, and Quebec workers won two. So while the Conservative government in Ontario cut paid sick days, they failed to smother the movement. Then COVID hit.

The pandemic exposed the dangers of precarious work and how structural racism in the labour market puts Black, Indigenous and racialized workers’ health and lives at greater risk. The pandemic itself pushed Ford and other provincial governments across the country to provide job-protected unpaid leave and ban employers from requiring sick notes (two previous movement demands), but only as temporary measures. The broad support that now exists for paid sick days was not automatic, but rather emerged from the movement that had been built prior to the pandemic and escalated during the pandemic.

The migrant justice movement organized days of action across the country to highlight precarious housing and working conditions for migrant and undocumented workers. A report by the Migrant Workers Alliance for Change exposed labour rights violations, unsafe conditions, increased racism and the need for status for all, noted that migrant farm workers “never received any sick days in previous years and this remained the case this year.”

Black health leaders mobilized to demand the collection of race-based COVID data.  The most recent data from the City of Toronto revealed that 79 per cent of COVID cases are among racialized communities and 25 per cent among Black people, while only 51 per cent of the population is racialized and 8.8 per cent is Black. As health leaders explained, racialized workers “lack access to safe working conditions and paid sick leave, and there are drastic consequences when one needs to call in sick. We need changes in policy and frankly, we needed these implemented yesterday.”

The movement response to the pandemic has shifted the balance of forces. Mayor of Brampton Patrick Brown, former leader of the Conservatives who voted against paid sick days in 2017, is now repeating the movement slogan #PaidSickDaysSaveLives because he sees the urgency of curbing workplace outbreaks in his community. He has joined mayors across Ontario, including Toronto’s right-wing mayor John Tory, to demand paid sick days. The Ontario Medical Association had ignored paid sick days when they were cut, but now considers it “unfathomable” that workers not have access to them. Now every medical officer of health and most media outlets are repeatedly calling for paid sick days. The Globe & Mail called employer-paid sick days a “conundrum” in December, but by February finally called for legislation (though still failed to recognize the importance of permanent paid sick days beyond the pandemic).

The ground has shifted when it comes to paid sick days, thanks to years of campaigning. Just a few years ago the Ontario NDP supported 5 paid sick days and the Liberals only legislated two. But now all opposition parties have supported legislation that echoes the movement: 7 permanent paid sick days + 14 during a pandemic. Bill 239 would have saved lives, represented a major gain for workers across the province, and been a massive victory for the movement. It’s clearly a setback that it was voted down this week.

But the fact that a movement-inspired bill was on the agenda with full support from all opposition parties is a victory in itself, and has helped put the Conservatives on the defensive. While the Conservatives mocked and cut paid sick days a few years ago, now they try to claim they have already provided workers with paid sick days through the CRSB. As Labour Minister Monte McNaughton said before voting against Bill 239, “we’re advocating on behalf of workers…there is now four weeks of paid sick days.” But retroactive federal income supports are no substitute for paid sick days, and Conservative posturing on this issue has not stopped the demand for paid sick days from growing.

Federations of labour from every province and territory have launched a united campaign, for “universal, permanent and adequate employer-paid paid sick leave for all workers now.” This effort is crucial to put pressure on every  provincial and territorial government, particularly the BC NDP. With a majority government, they could table legislation that mirrors Bill 239 tomorrow and would have the power to pass it. Instead the Minister of Labour Harry Baines continues to deflect to the federal government. This deprives workers in his own province of paid sick days, and gives a left cover to Ford to do the same in Ontario. Rather than taking the same position as provincial conservative governments, the BC NDP should legislate paid sick days to save lives and set a standard for the rest of the country.

In Ontario, the movement must continue organizing beyond Bill 239. Many Conservative MPPs won the last election by a narrow margin, and need to answer for their vote against paid sick days. Now is the time to escalate pressure on Conservative MPPs through phone zapps, calls and meetings. The Liberals have already tabled Bill 247, which would provide 10 permanent employer-paid sick days. The movement needs to ensure not only that all opposition parties continue to support this paid sick days legislation, but that conservative MPPs feel pressure to distinguish themselves from their party on this issue and support it this time.

It’s movements in the streets and workplaces that have raised the call for paid sick days for all – as an issue of public health, racial justice, gender justice and disability justice. These movements started organizing years before the pandemic and have escalated during the pandemic. They have not conceded when inadequate policies were on offer, whether it was inadequate numbers of paid sick days before the pandemic, or a temporary and retroactive federal program during the pandemic. Instead, campaigns have tirelessly echoed worker demands and centered equity, and through the process have shifted the terms of debate.

The vote on Bill 239 reflected the current balance of forces in Ontario, where after years of campaigning the Ontario Conservatives are now isolated in their opposition to paid sick days. The next step is to drive a wedge into the Conservative party and split them over the issue. They need to hear that their opposition to Bill 239 cost lives, and that they must support Bill 247. At the same time there are growing campaigns in every province and territory that need to pressure whoever is in government to immediately legislate paid sick days for all. The fight for paid sick days isn’t over, it is expanding.