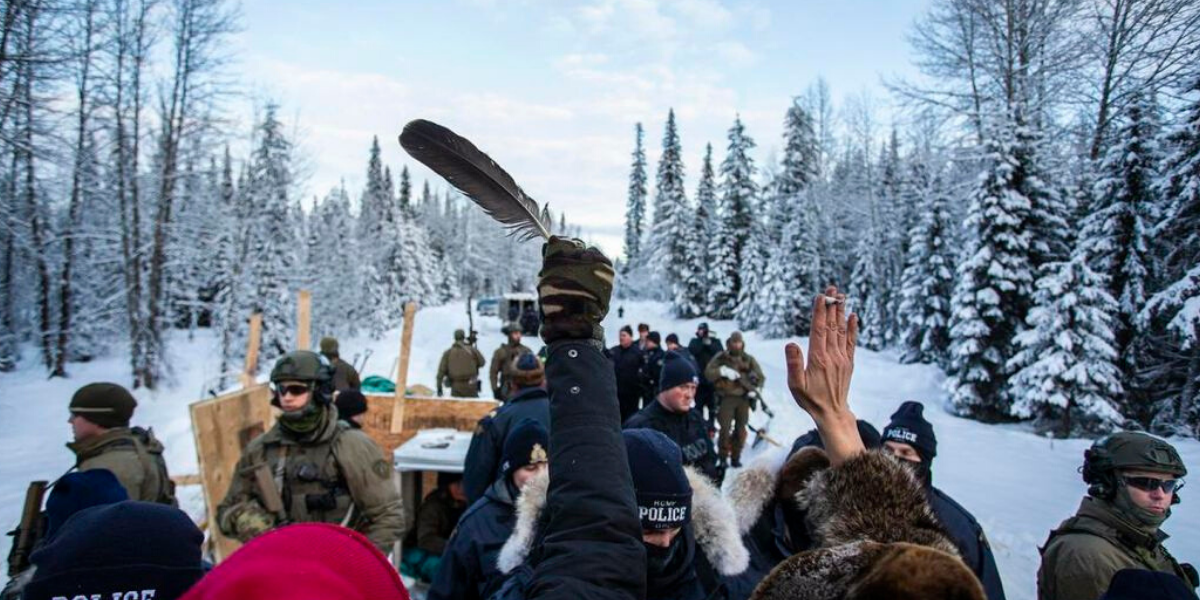 The police killing of George Floyd has unleashed street protests across the US, Canada and elsewhere. Thousands hit the streets of Toronto to march against Floyd’s public lynching and the recent death of Regis Korchinski-Paquet, an Afro-Indigenous woman, during a visit by police. These mass mobilizations across Turtle Island have thrust calls to defund the police into the political mainstream.

Within a week of Regis’s murder, Chantel Moore of the Tla-o-qui-aht First Nation was killed by police in Edmundston, New Brunswick. Less than a week later, a video surfaced of RCMP officers in Alberta beating Athabasca Chipewyan Chief Allan Adam.  Just a day earlier the RCMP commissioner denied the existence of systemic racism in the force. Shortly after those incidents, Rodney Levi, a Mi’kmaq man from the Metepenagiag First Nation, was fatally shot by an RCMP officer. The bell still tolls for Jermaine Carby, Andrew Loku and Neil Stonechild. As the state continues to mete out its violence, calls to defund grow in size and urgency.

But what does it mean to defund the police in settler Canada? Political elites in Toronto are pushing for a 10 percent cut to the city’s police budget. A reduction of this size would still mean that Toronto Police Services would receive over a billion dollars for the next year. To give you some context, we could quadruple the funding of city libraries, public health and senior services, and still not achieve the same level funding as the police even after the cut. While redirecting funds is certainly necessary, it only scratches at the surface of the problem. What it misses is the full extent to which interlocking systems of violence engulf the lives of Black and Indigenous peoples in Canada. Racialized violence is neither accidental nor disproportionate – it is a necessary and intentional feature of the project of settler capitalism. We need to amplify the 27 demands made by Black Lives Matter-Toronto, including the demand for an immediate 50 percent reduction towards the goal of zero funding.

Defunding the police in the settler-colonial context

Policing and incarceration are not hangovers from a settler past. They are but two dimensions of the settler state’s ongoing carceral power, a power which delivers as intended. And as Glen Coulthard writes, “Settler colonialism is about more than just history repeating itself. It is about the most violent acts of history being reproduced, over and over, to the point of being normalized so that they can be repeated today in ways that are increasingly harder to detect.” Because the normalized killing of Black and Indigenous lives is by settler design, fiddling with the police budget simply doesn’t cut it. As Angela Davis reminds us, the police have always served the interests of white supremacy.

The call to defund goes beyond a modest reshuffling of line items on a city budget. It must be inextricably linked to the abolition of police and prison. And it cannot simply replace the police with a ‘new’ body, whether composed of social workers or any others, who pursue the same destructive settler carceral mandate under different cover. Have we not learned anything from Canada’s history of residential schools, the “Sixties Scoop”, and the continuing genocidal practices of child welfare perpetuated against Indigenous and Black people? As an abolitionist project, to defund is to contest all aspects of carceral power and contesting underlying social relations within settler-capitalism—nothing less than a project of transformative change, committed to uprooting oppressive systems.

No to police, no to colonialism

If the police are just one form of a much bigger web of settler-colonial violence, defunding police has to mean more than just defunding the police.  An abolitionist future where we are all supported entails the abolition of settler capitalist state violence in all its forms, not just the violence perpetrated by police departments.

Indigenous systems of legal thought have much to teach us about repairing harm and restoring relationships without the criminal punishment system. As Bronwyn Dobchuk-Land writes in “Resisting ‘Progressive’ Carceral Expansion”:

“…there is much for carceral abolitionists to learn from Indigenous organizations that refuse to accept that state control over their communities is inevitable and who act out sovereignty in their day-to-day operations. This resistance can lend insight into addressing communities needs, while working for social change that does not treat prisons and policing as inevitable.”

The call to defund, disarm, and abolish must advance decolonization and the revitalization of Indigenous law and legal traditions. Anything else is little more than reproducing genocide.

We thank Professor Adrian Smith for his friendship, guidance and feedback as we worked through this article.