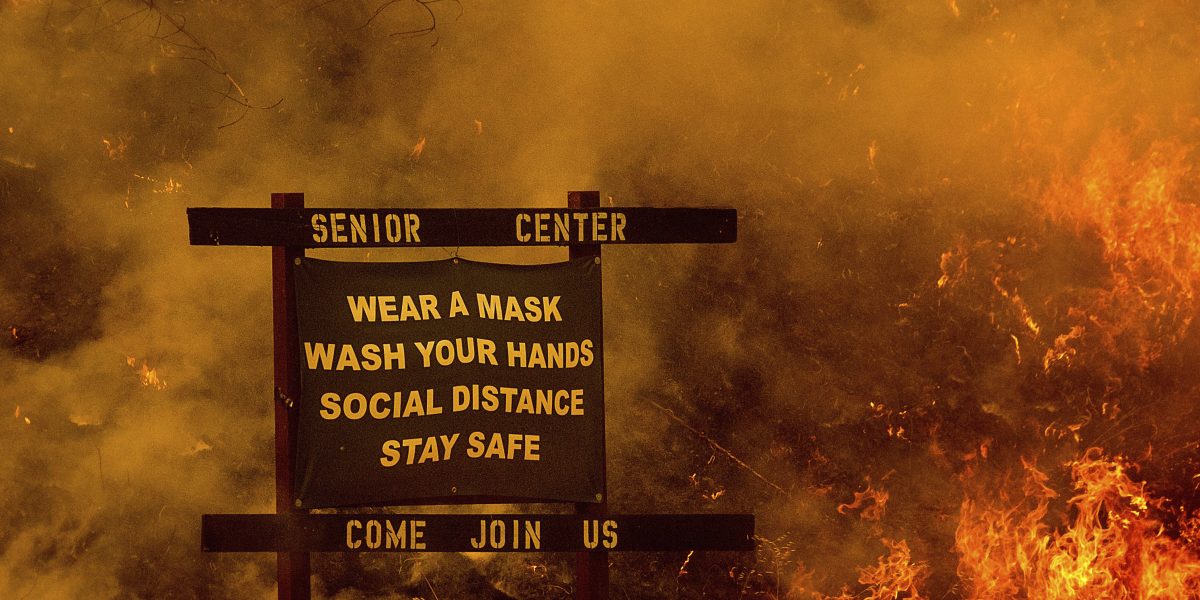 Canada, the US, and other world powers are attempting to brand the COVID-19 pandemic as ‘over,’ and demanding a return to ‘normal.’ But capitalism has not only failed to address the pandemic adequately, it is perpetuating and profiting off of the many disastrous circumstances which created it in the first place. As with climate disasters, we are now dealing with social, economic and political aftershocks that can be as damaging as the initial shock.

In geological terms, an aftershock is a series of smaller earthquakes that follow a larger quake. They occur as the Earth’s crust adjusts to the schism created from the main earthquake. There is no way to exactly predict earthquakes or their aftershocks, but scientists are able to use modelling to make predictions of future seismic events. “Following a seismic event, there can be a strong follow-up earthquake that does further damage to already compromised structures,” explains researcher, Robert Shcherbakov.

Aftershocks can also include social, economic and political policies that respond to and worsen natural disasters. As Yamimar Bonilla and Marison LeBrón explain in their collection of essays examining the lasting impact of Hurricane Maria in Puerto Rico: “Aftershocks can continue for days, weeks, months, and even years after the ‘main-shock…their effects can compound the damage of the initial shock and create new urgencies that complicate recovery efforts…not just the effects of the wind or rain but also what followed: state failure, social abandonment, capitalization on human misery, and the collective trauma produced by the botched response.”

Just as Puerto Rico, New Orleans, and other locales recover from natural disasters, they have had to deal with social and political fallout from them as well. In The Shock Doctrine: The Rise of Disaster Capitalism, Noami Klein investigates how capitalism exploits places and populations in shock from disasters, from invasions and war to earthquakes and hurricanes. “Not so long ago, disasters were periods of social levelling, rare moments when atomized communities put divisions aside and pulled together. Increasingly, however, disasters are the opposite: they provide windows into a cruel and ruthlessly divided future in which money and race buy survival.”

Similarly with COVID-19, rather than seeing the desperate need to come together across divides and create a better world, the ruling class have only doubled-down in their competition for profits. Rather than using their funds to provide vaccinations for the entire world or put an end to forced poverty, billionaires are jetting themselves into almost-space just to have “the best day ever.” COVID-19 shares other similarities with capitalist climate disasters: the “aftershock” policies perpetuate “preshock” conditions that magnified the disaster in the first place.

We’ve known this whole time that the key to stopping the spread of Covid-19 has been paid sick days, and that those who would benefit most would be those deemed ‘essential workers,’ such as grocery store clerks, custodial staff, and fast-food attendants. These workers often only earn minimum wage, and are often positions held by women and racialized workers. This disparity is not simply an aftershock from the pandemic: it was preshock conditions that–like modeling future seismic events–predicted who would disproportionately die from COVID-19. A decade ago the H1N1 pandemic disproportionately impacted racialized essential workers, and a study in the American Journal of Public Health concluded that “mandates for sick leave could have significant health impacts by reducing morbidity from ILI [Influenza-like illness], especially in Hispanics.” Yet a decade later Latinx, Black, Indigenous and other racialized workers are still denied paid sick days, and had predictably higher rates of COVID-19.

When forced to work in under-paid positions, workers often have no other choice but to go to work sick. The fight for workers’ rights is not just a pandemic issue: workers mattered before Covid, and we should all know that they matter after. Yet governments in Manitoba, Ontario and Nova Scotia that were forced to implement paid sick days at the height of the pandemic are now planning on cutting them now that COVID-19 is ‘over.’ While the BC NDP has agreed to implement some amount of permanent paid sick days, the pressure needs to be kept up to let them know that these issues existed long before any sort of disaster.

The fight for paid sick days is only one example of the massive social schism that only worsened during the pandemic. And while COVID-19 itself was unpredictable, the state policies in response are deliberate and planned. While there were brief moratoriums on evictions, the state has returned to violence to worsen the oppressive conditions faced by unhoused communities. While the lockdowns produced brief reductions in carbon emissions, the state has returned to building pipelines and fighter jets amid deadly heat waves.

It’s important to remember: all of these point directly to the failures of capitalism. Aftershocks as a phenomena remind us that a ‘natural disaster’ is not simply an immediate event, but builds and continues well after the climax. In this way, the fights for climate justice, for worker’s rights, for police and prison abolition, were not unique to the pandemic.

A return to capitalist normal, or a revolutionary recovery

So as the media and government are trying to say we should ‘return to normal,’ we need to remind them that normal was the problem. We’re already seeing the narrative that we need to buckle down and accept new austerity measures in order to improve the economy. Governments are gutting supports like the Canada Recovery Benefit, and business is doing its best to force workers to take the brunt of a failing economy, one that was failing long before the Covid-19 pandemic.

But if normal was the problem, then a return to it is not inevitable. As Naomi Klein explained, “The universal experience of living through a great shock is the feeling of being completely powerless: in the face of awesome forces, parents lose their ability to save their children, spouses are separated, homes – places of protection – become death traps. The best way to recover from helplessness turns out to be helping – having the right to be part of a communal recovery.”

This highlights the important work that revolutionaries around the world are doing. We’re not just revolutionaries because we see the inadequacies of our current system, but genuinely believe that humanity is capable of so much more. We know that the bosses and 1% won’t help us, that has always been true both pre and post-COVID. What has also always been  true is that we will work in solidarity with one another, seeking to raise each other up and be a part of a world that works for people, not for profit. The ruling class will seek to form the aftershocks of the Covid-19 pandemic in an image that will only return to a normal that created the pandemic in the first place. We know we can create something better.