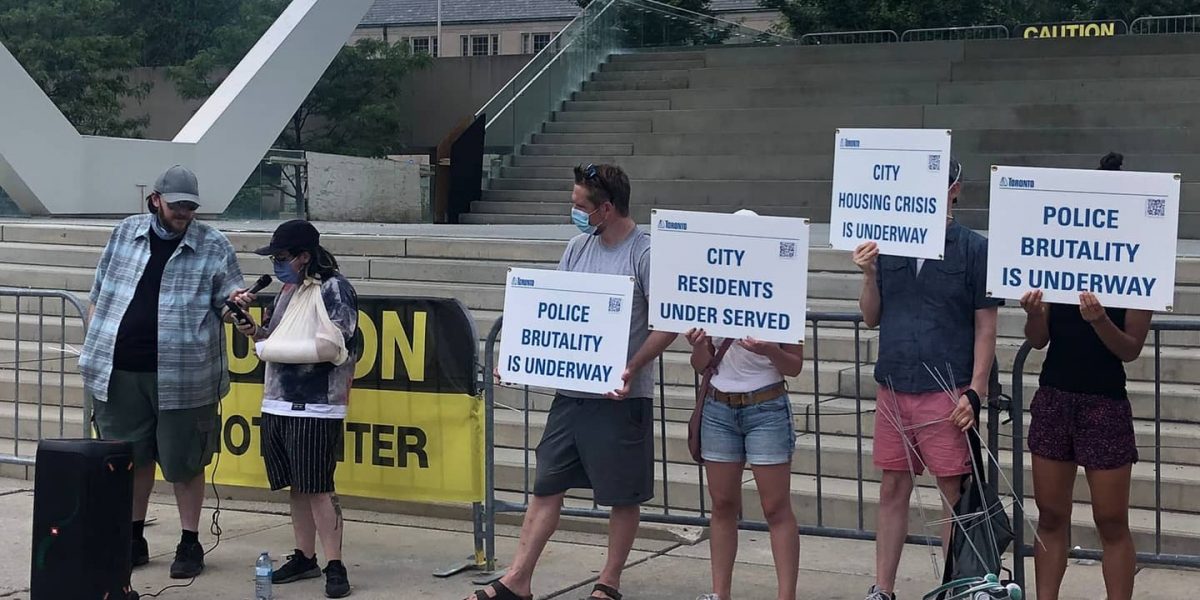 On July 26 a No Encampment Evictions rally was held in front of Toronto City Hall demanding that Mayor John Tory and City Council defund the police and fund housing.

This rally was organized by Health Providers Against Poverty, Shelter and Justice Housing Network and Toronto Drop-In Network. There were speeches given from multiple encampment residents, outreach workers who have attended encampment evictions, and a variety of organizations. Personal stories were told of the shelter system and the city’s general approach to encampments. Calls for John Tory to resign were made and to vote out city council in the next election. There were also calls for increases to ODSP.

This rally comes after multiple encampment evictions have occured located at Trinity Bellwoods, Alexandra Park and Lamport Stadium Park. The city has brought in police and private security to carry out the evictions and has no plans of changing this strategy. The most recent eviction at Lamport Stadium garnered large media attention for the levels of police violence. Videos and pictures of the police violently removing encampment residents and their supporters were shared all over social media. The result of the police violence led to multiple people having bones broken, multiple people in the hospital for concussions or needing stitches, large amounts of people pepper sprayed, 35 people were arrested and many are dealing with the psychological effects of what occurred.

Following this Mayor John Tory once again defended the City of Toronto’s actions. John Tory has continued to make the claims that the city has made over 20,000 engagements with encampment residents, and that they are moving people from encampments to housing.

As outreach worker Lorraine Lam has pointed out something like giving an encampment resident water would count as an engagement. Therefore, if you give the same resident water five different times, that counts as five different engagements, but it does not mean that meaningful interactions are happening or that relationships are being built. In regards to the claim that they are moving to people from encampments to housing, this is simply untrue. They are offering people from encampments spots at shelters and congregate living settings, places where many encampment residents have been traumatized. From the eviction at Lamport Stadium where around 20 people were evicted, only 3 ended up with shelter spots. There are no permanent affordable housing options being provided. The waitlist in Toronto currently for an affordable housing bachelor unit is around 10-12 years.

As was pointed out by multiple speakers at the rally, encampment clearings have been going on for decades and there are many underlying issues that contribute to homelessness in the city of Toronto. However, instead of addressing these issues the city continues to try and take the approach of pushing unhoused individuals out of sight and out of mind. When they evict people from encampments, they are attempting to push them further out of the public eye. What this does instead is push people away from resources, services and the community members that so many of them rely on.

It is clear that John Tory and the city would rather spend money on policing than spend it on providing affordable housing. Nothing will be solved with policing and violence. The city must stop these encampment evictions immediately, defund the police and fund affordable housing.