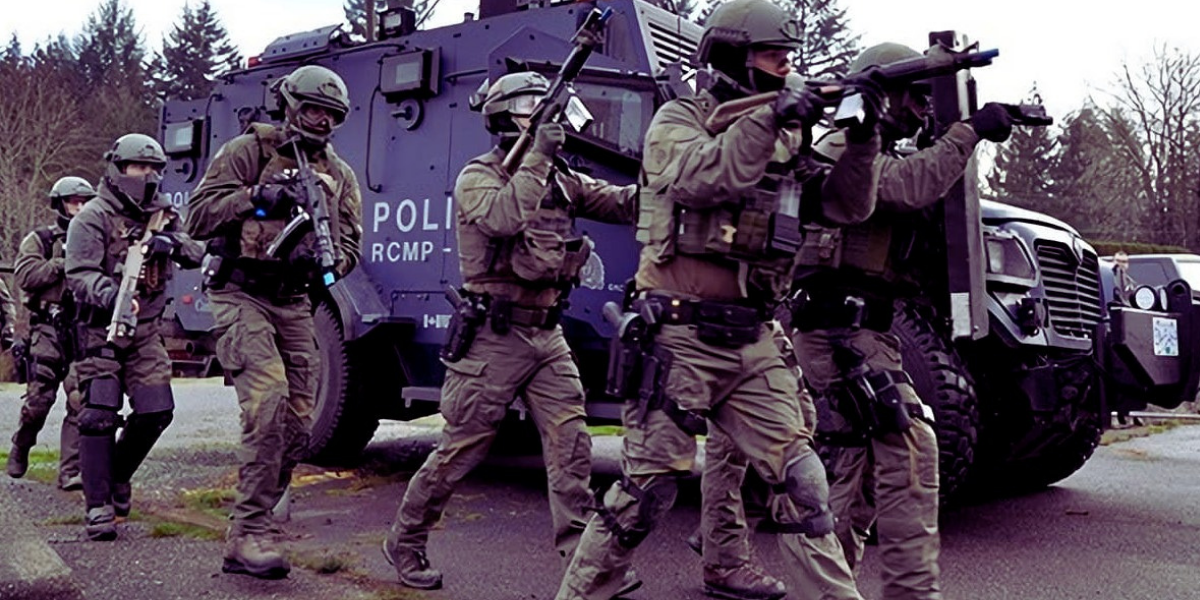 While calls to defund police have spread across Canada, police budgets have actually been growing, often substantially. Police have deployed a range of fear campaigns and copaganda exercises—from claiming crime rates are rising while they are falling, to demonizing unhoused people, to focusing on low-level and harmless activities like graffiti. They have also used layered policing, expanding through a range of activities such as mental health partnerships. They have even made appeals to diversity recruitment costs and claimed that diversity would be sacrificed if budgets are cut. Recently COVID vaccination policies have been used to argue for more funds.

Among the most impactful police funding increases, one that poses real threats to municipalities across the country, is the recent pay increase (with significant retroactive pay raises), negotiated by the National Police Federation and signed in August 2021. The results of the new contract deal mean that as of April 1, 2022, RCMP members will be enjoying hefty wage increases of 23.7 percent over six years. An RCMP constable will make up to $106,576—a leap of $20,000 per year—and a staff sergeant is going to make between $134,912 and $138,657. Significantly, the deal is retroactive with increases going back to 2017. These increases will bring new costs of hundreds of millions of dollars per year.

Financial burdens of the RCMP

Municipalities across the country with RCMP contracts are already scrambling to figure out how to meet these substantial new policing costs. The executive director of the Union of Municipalities of New Brunswick put their worries this way: “It’s kind of an issue that affects smaller municipalities as well as larger municipalities. So everyone is kind of grappling with what this could mean, trying to make plans accordingly.”

Police already gobble up too many resources. Policing costs can take up 30 per cent of the budget for many municipalities. A look at a range of cities and towns, of varying sizes, in British Columbia gives a sense of the costs. In Coquitlam, the 2021 budget for policing was $40.5 million, of which $30.2 million consisted of the city’s contract cost with the RCMP. In Burnaby, the city’s RCMP operations are budgeted to be $65 million for 2021, and estimated to bulge to $72.3 million by 2025.

In smaller cities and towns, we see similar budget burdens. Policing costs are slated to take up $9.9 million in Vernon, which is 22% of the city’s entire 2021 budget. In Kamloops, the RCMP took $32 million in 2020, and in nearby Penticton the RCMP gobbled up almost $9.8 million. In Kelowna, the city budget delivers more than $37 million for the RCMP.

In BC, municipalities with populations of 15,000 or more pay 90 percent of their RCMP contracts with the federal government covering the remaining 10 percent. Those with populations of 5,000 people to 14,999 pay 70 percent of their RCMP contract. Additionally, these numbers do not account for civilian staff or capital costs, such as detachment buildings or city cells. Municipalities have to cover the entirety of these costs.

These policing numbers are already disproportionately high, and well beyond the budget numbers for shelters, harm reduction, and youth programs combined. Municipalities have long been left to deal with tight budgets. More and more services, and their associated costs, have been downloaded onto municipalities, leaving cities and towns strapped for funding, as they rely largely on limited taxation revenues. The new RCMP contract will threaten resources for essential and necessary community services even further.

The new RCMP deal means municipalities will be faced with limiting or reducing services if they are to meet their obligations to the RCMP as contracted. The RCMP costs could pose real, additional, crises for municipalities. And in northern BC, Alberta, and Saskatchewan it means cutting resources in towns in which many Indigenous people live and work.

Given the stresses these costs will inflict, the mayor of Warman, Saskatchewan sent a letter to federal Public Safety Minister Bill Blair highlighting the fact that the new agreement will cause an increase of more than 21.5 percent in the city’s RCMP policing budget. In his view, Warman is not in a financial position to absorb the significant costs imposed by the agreement. Mayor Gary Philipchuk wrote:

“If these costs are passed down to our municipality, the fiscal shock caused by this decision will further threaten the viability of our community and therefore the safety of our residents. As negotiations were conducted exclusively between the federal government and the union, municipalities had no say in the collective bargaining process and therefore should not be burdened with the results. Furthermore, the federal government did not provide updates to relevant stakeholders, including municipalities, during the negotiation process.”

Similarly, the mayor of Rimbey, Alberta, said that changes to the policing funding model are severely impacting small towns across Alberta with the downloading of costs onto small communities causing massive financial burdens for governments. In his words: “I was dumbfounded, to be quite honest with you.” In Brooks, Alberta, the mayor said that the retroactive pay would cost his small town $700,000 in one-time back pay. That figure is equivalent of a tax increase of five-and-a-half per cent. And that is, in his words, “money that would be used elsewhere.” The city council of Red Deer, Alberta, issued a similar appeal saying: “It will be difficult to incorporate the additional $690,000 each year into future budgets without impacting property taxes or budgets in other areas.”

What is especially galling for many is that municipalities were excluded from the bargaining that resulted in these heavy burdens. The Alberta Urban Municipalities Association (AUMA) notes that municipalities that have to pay the costs were not even at the bargaining table. They were not able to plan properly for these unexpected increases, and lack the fiscal capacity to meet the retroactive pay increases. As Counilor Laurie Guerra of Surrey, where I live, put it: “Simply put, the RCMP are employed, or paid, by the city that they work for and yet that employer, or the city, municipality, has no say on how much they are paid or a voice in the collective bargaining agreement and to me it seems that it’s kind of forced on them.”

What kind of bargaining is negotiated by detached third parties and imposed from without? Welcome to the federal government bargaining with mercenaries it knows it cannot do without.

Not a union, a class enemy

Before 2015, RCMP staff were prohibited from forming an association. That changed with a Supreme Court of Canada decision that granted RCMP the right to bargain collectively. The newly formed National Police Federation began collective agreement negotiations in 2019. Their current contract is their first.

It is telling that the RCMP association received such favorable, preferential treatment from the government in their very first negotiations. I have served as a union bargaining team member on several rounds of bargaining with a public sector employer. And in each case, we have been faced with zero mandates (prohibiting gains) or net neutral (a gain is offset dollar for dollar with a loss) frameworks imposed by the employer. Not so for the rookie RCMP association.

Despite the appearance of workers bargaining with their employer, the RCMP is not a union. Police are not part of the working class and police associations are not part of the labor movement. Workers have fought to ensure this exclusion, including the current Cops Out of CUPE movement. On the contrary, police are the primary frontline state force in busting unions, breaking strikes, suppressing working class movements, and repressing working class people and communities—and they have killed numerous striking workers to do so. During the pandemic workers have been on the frontline providing essential services—from farms and factories to schools and hospitals—while police have been on the frontlines of repression, from racialized lockdown enforcement to encampment evictions. As their power grows, ours is diminished. They are class enemies.

In Canada the RCMP are the force of colonial dispossession of Indigenous people and occupation of Indigenous lands. They police borders that serve to exclude and exploit migrant workers. They criminalize and repress unhoused people, sex workers and drug users. They fuel the prison system that disproportionately incarcerates Black, Indigenous and racialized communities. Police associations only protect the interests of police officers, and police power, which serves the 1%. The gains of police come at the expense of working class communities—and especially those facing racism, sexism, homophobia/transphobia, and other forms of oppression.

Police serve a central, and special, role within capitalist social relations. Police serve to secure and maintain labor markets, property relations, conditions of exploitation and value extraction, and oppression. They are a difference maker for capital against workers and the oppressed in struggle. Without police, capital would be left defenseless. So, it is no surprise that while workers unions are faced with austerity contracts, zero gains bargaining and cuts (both real and relative to inflation), the RCMP association is rewarded with a 24 percent wage increase with retroactive pay in their very first contract.

And all of this comes, once more, at the expense of real community needs. The need to defund and dismantle police is made even more clear.