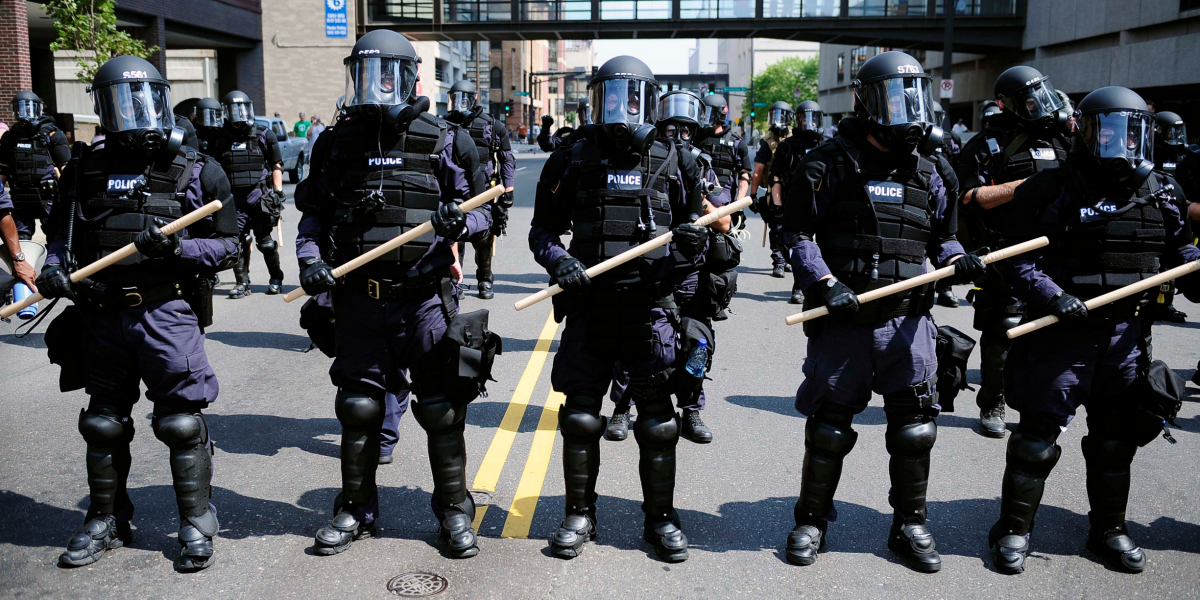 The NBA wildcat strike for racial justice pushes all of us to raise our game in campaigns to defund and dismantle the police. Bold moves by high-profile athletes will mean that more people in our workplaces, schools, and communities are open to talking about what we mean when we say that police are armed defenders of colonialism, white supremacy, and class inequality. Well, what do we mean?

It’s easy to call up cartoonish images. Picture a cigar-chomping cat holding bags of money whispering shoot-to-kill orders in a gun-toting pig’s ear. There’s something to this vision. In 1995, as Indigenous protestors defended a sacred site at Ipperwash Provincial Park, Ontario premier Mike Harris told the provincial police to “get those fucking Indians out of the park, and use guns if you have to.” Hours later, the OPP stormed the park, and a police sniper shot and killed Ojibwa land-defender Dudley George.

But while direct orders from the rich and powerful to the police are infuriating, they are not the whole story. Socialists need fuller explanations to help understand the structural problems of policing. We need to be able to explain why even hypothetical “good cops”—well-intentioned officers who respect all laws and regulations—are armed defenders of capitalism, racism, and settler-colonialism.

Mainstream political parties and media push toward the “bad apple” theory of police-inflicted harm. They say cops need better training or body cams or whatever, but when major harm is done by police, it’s individual officers to blame, not the institution. Here are three ways in which the work of every cop—the entire system of policing—is in armed struggle against working-class freedom and democracy.

1. Police enforce the laws of the ruling class

Police enforce laws, not justice. Under capitalism, the basic legal framework is designed to protect private property and facilitate profit accumulation, not to meet human needs or ensure genuine equality.

So despite the fact that there are an estimated 5.5 empty homes for every homeless person in Canada, more than 230,000 people here experience homelessness every year. How do cops relate to the problem of homelessness?

Police enforce property laws by harassing homeless communities, tearing down their tents, and physically assaulting street-involved people who dare to protect themselves and their supporters. Cops arrest homeless people who reclaim empty buildings.

Homelessness might be solvable by redistributing vacant properties, or by creating socialized, accessible housing. But police have nothing to do with these solutions. It’s not that police are absent from housing struggles; rather, cops are there for evictions and other disputes over living space, backing up landlords and developers with force. Policing disperses and harms working-class communities and all they do to fight for and win real change to housing policy.

Just try to imagine a bizzaro world in which the best-of-the-best good-apple cops, in the name of achieving justice, are committed to arresting landlords who refuse to let homeless people live in empty apartments. You can’t even imagine that under capitalism. The job of police is to enforce the laws that serve ruling class interests.

Police in Canada search, arrest, and kill Black and Indigenous people at a disproportionately high rate. While Indigenous people make up 5 percent of Canada’s population, 38 percent of recent police shooting victims were Indigenous. In Halifax, a predominantly white city, Black people are six times more likely than white people to be street-checked by police.

While the racism of individual officers is obviously relevant, focusing on the psychology of individual cops invites “bad apple” explanations of police racism. As Black Lives Matter-Toronto cofounder Sandy Hudson explains, the reason that police disproportionately arrest and kill in BIPOC communities is because police are disproportionately deployed to BIPOC communities: “Black communities interact with police regularly because we live in neighbourhoods police target.”

Think of the crimes, to say nothing of the injustices, happening every day in rich white neighbourhoods. Gendered and sexual violence, illegal drug use, theft and fraud. It isn’t that these communities are crime-free; it’s that crimes there aren’t policed (unless perpetrated by outsiders, of course). Cops aren’t stopping rich white people on the sidewalk, searching their cars or knocking down their doors.

In other words, not only is the legal code racist and driven by class interests, but the actual way that police enforce laws protects wealthy, corporate interests and harms poor, low-wage, racialized, migrant, and undocumented workers.

Consider the example of wage theft. Bosses routinely steal workers’ wages, taking what is not legally theirs even according to capitalism’s own warped rules. The boss who makes you hand over your tips, who pays you less than minimum wage, who demands you work off-the-clock, who cuts into breaks, who makes you pay for tools and training. In the US, bosses steal around $15 billion in wages every year. That’s more than burglaries and robberies combined.

Imagine calling the cops to tell them your boss is robbing you. “Hello? Officer? My boss doesn’t pay me for the breaks I’m legally entitled to.” Laughter. But workers who settle accounts by taking $100 from the till? Or pocket an iPhone from the dusty store room? They’ll be cuffed and charged.

In principle, police are opposed to theft. But enforcement differs wildly depending on whether you’re a boss stealing wages or a worker lifting bills from the register.

While selective policing affects all workers, capitalism’s inherent racism means that some workers are more hurt by it than others. Migrant workers, many of whom are racialized, face some of the most severe exploitation on the job. Partly this is because labour law allows migrant workers to be hyper-exploited, and partly it’s because all workers and bosses know that police will do nothing to penalize employers or protect employees when bosses steal from and brutalize migrant labourers. The selective enforcement of ruling class laws is a key way in which policing is structurally racist and anti-working class.

3. Police are violent opponents of justice for Indigenous peoples

The history and ongoing vitality of the Canadian state is a story of settler-colonial violence against Indigenous lands and lives. Every day, Canada’s settler governments legitimize and fund capitalist development on unceded Indigenous lands. In 2018, the federal government spent $4.5 billion to buy and develop an oil pipeline through Alberta and BC. When people defending Indigenous sovereignty and environmental justice stood against pipeline construction, police were sent in to vanquish dissent.

It is inconceivable to imagine police siding with Indigenous blockades against pipeline developers or campaigns for land-back and decolonization, and not only because so many cops are racist flag-wavers. It doesn’t matter what cops feel in their hearts: the police force is the armed protector of Canada’s ongoing, day-to-day theft of Indigenous lands. To stop enforcing Canadian colonialism would be to stop being police.

Why do police put more effort into destroying Indigenous sovereignty than into achieving justice for missing and murdered Indigenous women and girls? Because Indigenous justice threatens white supremacy, and police aren’t accountable to justice; they are accountable to the settler-colonial state and its culture of whiteness.

Police accountability to white supremacy also helps explain why Toronto Police arrested three people at a BLM-Toronto action in July, held them for sixteen hours, denied them access to legal counsel, and refused one person’s access to medication, all for the innocuous act of throwing paint on a few statues. Statues of whom? Of the racist architects of colonialism in Canada and India: John A. MacDonald, Egerton Ryerson, and King Edward VII. The use of state-sanctioned force against Black protestors for taking an artful stand against settler-colonialism exemplifies policing’s accountability to white supremacy.

Defund the police, and reinvest in communities

So much in pop culture tells us that cops are our friends. From friendly cartoon sheriffs, to corny Crime Stoppers ads, to justice-at-all-costs detectives in Hollywood blockbusters, the message is blaringly clear: even if there are “bad cops,” police are ultimately on the side of the good guys. Any honest look at social problems such as the housing crisis, working-class poverty, racism, and climate change, reveals the fact that cops are enemies of working-class dignity and power. Spring’s Abolish The Police reader is an excellent resource for deepening our understanding of how and why.

The police cannot be reformed to serve social, economic, and environmental justice. They must be defunded and dismantled, at the same time as major investments are made in programs geared toward greater economic equality, environmental sustainability, racial justice, and deeper democracy. What can cops do to help? Quit their job.

A truly decolonized, socialist future rooted in democracy and ecological justice will require a fundamental break with the political and economic systems organizing society today.

Campaigning to defund the police and reinvest in communities is essential to building the solidarity and mass force-from-below we’ll need to achieve such a break.