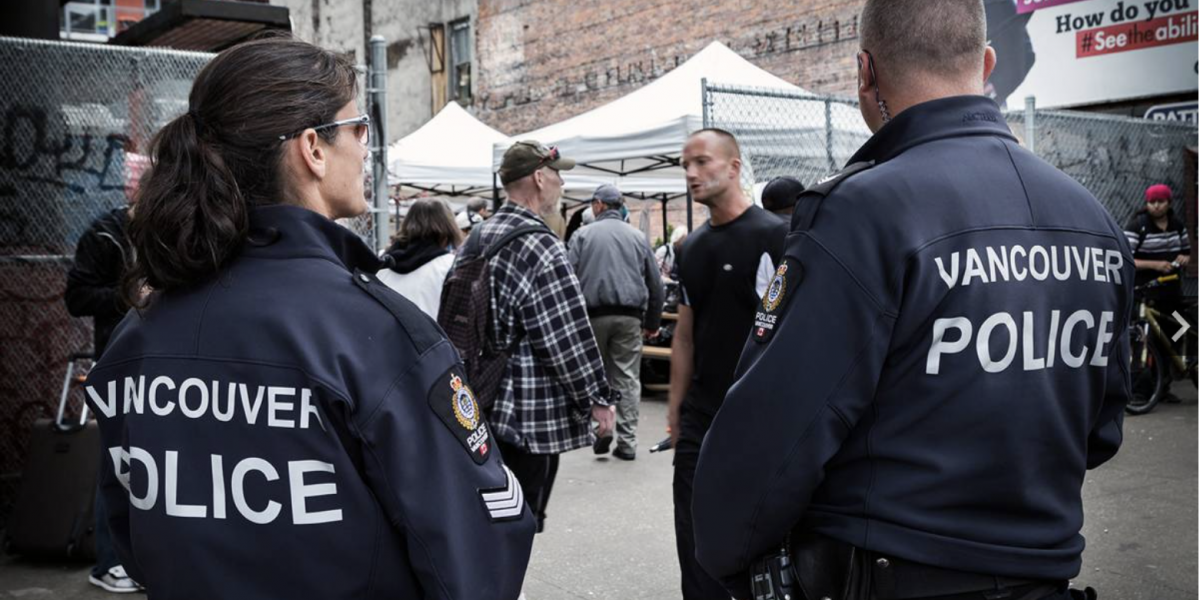 The second week of May showed starkly the depths of hostility, even contempt, directed at drug users across the Lower Mainland of so-called British Columbia. The perpetrators ranged from landlords and businesses to bylaw enforcement and city governments—in other words, the usual sources of violence in the drug war. Forces for profit and state power are escalating the longstanding war against poor and working class people, and targeting those who are self-organizing for their own sustenance and survival.

On April 29 the BC Coroner released a report that outlines the ongoing horror of overdose deaths across the Lower Mainland. In only three months (January to March 2021), Fraser and Vancouver Coastal Health Authorities had 171 and 137 deaths, respectively—representing 62% of all Health Authority deaths. On April 21, BC Emergency Health Services announced that paramedics responded to 138 overdose calls, the province’s highest single-day number to date. Of these, 45 were in Vancouver and 17 in Surrey.

These preventable deaths and near deaths are fuelled by conditions of poverty and criminalization. Yet the response continues to range unacceptably from negligence to violence—ignoring the rising death toll while targeting drug user organizing. Mere days after the coroner report, landlords evicted the Chilliwack Union of Drug Users (CUDU) from their space in Chilliwack. Then the City of Surrey canceled the business license of SNUDU (Surrey Newton Union of Drug Users). Finally, the City of Vancouver’s “decriminalization working group” ongoing commitment to policing rather than supporting drug users caused the Vancouver Network of Drug Users (VANDU) to leave in exasperation. These represent nothing less than multi-pronged offensives in a social war that is taking lives.

Poorbashing attacks on the Chilliwack Union of Drug Users

Staring on May 5, members of the Chilliwack Union of Drug Users (CUDU) have had to occupy and lock themselves inside their own space after the new landlords of their building came to evict them. Police also arrived on scene to assist the landlords in their efforts. CUDU has been operating a meeting space and overdose prevention site since last year. This was not the first targeting of the CUDU space. The storefront location on Yale Road was raided by the RCMP on March 19. Video posted on social media shows the landlords using stigmatizing language against CUDU members.

The City had already ordered the closure of the neighboring Portal Shelter by June 1, and CUDU members suspect that this and the move against their space are both reflect the Downtown Chilliwack Business Improvement Association’s efforts to socially cleanse the area to benefit businesses and developers. At the April 6 council meeting that sealed Portal’s fate, over 100 “nightmare” letters from businesses and property owners were presented. Surrey’s council produced a pile of similar bylaw enforcement driven letters in their efforts targeting SNUDU only days later.

Councilors piled on with a stream of poorbashing rants of their own. Councilor Sue Knott launched a stigmatizing screed: “I drive down that road every single day. I see people staggering around, falling down, ambulances, no masks. People with violent and erratic behaviour. I feel strongly that we made a commitment to the community that if they hung in there for 18 months the facility would be moved.” Another councilor, Chris Kloot added: “We do owe it to the community, and the time is up for this location.” No sense from Kloot that drug users are part of the community who city councilors might also “owe” some consideration. Instead, he made the outrageous claims that housed people are “made to feel like hostages.” Hyperbole coming cheap, Councilor Jeff Shields called the area around the shelter a “war zone” (without acknowledging the social war being waged by council). Councilor Jason Lum declared his intentions, saying “I want this to be the last shelter the City of Chilliwack ever approves.” Rightwing Mayor Ken Popove concurred that this was “the wish of everyone around the council table, and beyond as well.”

Driving the attack on CUDU (as is also the case in Surrey) is gentrification of a city center. The conditions of poverty, driven by profit-maximizing businesses and developers, and which direly impact CUDU members, make properties available below “market value.” The new owners of the CUDU see this is as an investment—not a matter of life and death (which is quite literally immaterial to them). They can sit on the property and see values rise simply by doing nothing. They can hold it while the city adds value for them—by removing poor people. To be clear, the developers and city council have shared interests, though the city, bylaw, and police are looking to step things up, not willing to wait for the company’s longer term profit plan to play itself out. So they, in turn, push the developers to move things along.

CUDU have only asked that they be allowed to use the space the final month of their already paid first and last months rent. This is a small ask that will save lives, in a context where services and supports are sorely lacking, but the City seems fine with fatalities.

On May 10, a hearing of the City of Surrey decided, swiftly and with little informed discussion by council members, to cancel the business license for the Surrey Newton Union of Drug Users (SNUDU), which had allowed them to open and operate the only publicly accessible space for and by drug users in Surrey. This despite presentations from PIVOT legal, and longtime advocate and SNUDU founder Ann Livingston.

A center of mutual aid support, advocacy, and education, hundreds of people had made use of the space at 13245 72nd Ave since SNUDU acquired their lease in September 2020. The City of Surrey had issued SNUDU a business permit but had been told the permit would only be finalized when inspections occurred. Unfortunately, the City refused to do inspections in the context of COVID and SNUDU were simply told to proceed as if they had a permit. The May 10 hearing charged SNUDU with operating without a permit.

There has been a very active social war against drug users in Surrey (as there has been against unhoused people and sex workers). This social war has been carried out largely through bylaw enforcement, typically driven by local business interests. SNUDU reported being targeted and harassed by bylaw enforcement officers virtually every day since they opened. At the hearing it was made apparent that bylaw officers were being paid to solicit complaints against the space from nearby businesses and pedestrians.

Actions of successive city governments in Surrey have ranged from hostile to negligent, making already dangerous situations even more dangerous for drug users, sex workers, and unhoused people. As SNUDU pointed out ahead of the hearing, there are no toilets, showers, or welcoming spaces for people in Newton who use drugs and/or are unhoused. The current mayor and council have taken reactionary positions towards even minimal drug use. They have infamously refused to allow licensed cannabis shops to operate in the city, after spending public money for councilors to take junkets to Washington and Colorado to observe legalized pot sales.

Remember that Surrey was the place that innovated the dumping of chicken manure in areas where unhoused people were staying, an operation that received more attention and pushback when it was replicated in Abbotsford.

The SNUDU space came after previous attempts by drug users in Surrey to secure a space. They had a previous space taken away from them by actions of the landlord and had been hassled out of the public library where they had been holding meetings.

Newton, one of Surrey’s five city centers, has been a major target of gentrification. RCMP and bylaw enforcement have recently contributed to the closure of local trailer parks, among the few relatively affordable housing options in Surrey, on the same basis of fear mongering over drug use and sex work. Predictably those lands have been converted to townhouse developments with hundreds of former residents dispossessed (many having owned their mobile homes but not the land under them) and displaced. Area businesses have deployed so-called street ambassadors to hassle unhoused people and folks consuming drugs openly. They have managed to drive people out of an empty patch of land where they had been camping.

The “Vancouver Model” is a Trojan horse for police

Meanwhile, in Vancouver that same week, the Vancouver Area Network of Drug Users (VANDU)—one of the country’s longest operating and most influential drug users’ associations—had to take the drastic step of quitting the city’s drug decriminalization working group when it became fully clear that drug users would have no voice in the policies that would impact, and potentially take, their lives.

Last November, Vancouver City Council unanimously passed a motion to request the federal government decriminalize the simple possession of illicit drugs in the city. This was the result of over two decades of organizing by VANDU. But the city is rushing its final submission to Health Canada without the participation and experiences of drug users. The result is a plan that is not informed by drug users’ knowledge, and a process that has been top-down and bureaucratic. Beyond the immediate harms, this could entrench a dubious and deadly model for decriminalization across the Canadian state.

When the City refused to change course, VANDU left the working group and organized a press conference, march, and rally under the banner, “The Vancouver Model is a Trojan Horse” (for policing and further repression). As speakers put it, there can be “nothing for us without us.”

A war on self-organization

Th events of the second week of May are multi-pronged offensives in a social war. A war in which organized drug users are targeted as impediments to profit, land values, and regulatory “law and order.” The forces driving these attacked are the combined forces of the state and capital—landlords, businesses, enforcement, and the city governments that support (and are supported) by them.

As always, underpinning drivers are property values, business profits, and police funding demands. As speakers at the VANDU rally made clear, police are dependent on drug war funding and the public panics surrounding drug use that justify police budgets—and they are not ready or willing to release their grip on those. As always, policing, criminalization, and repression kill. This is a war with very real casualties.

It is not accidental that those being targeted are organized. Democratic and participatory organizing among those directly impacted by decisions of the state and capital pose the greatest threat to profit models and authoritarian governance not only because they build strength (among those whom powerholders need to be vulnerable) but because they show real alternatives to the present state of things.