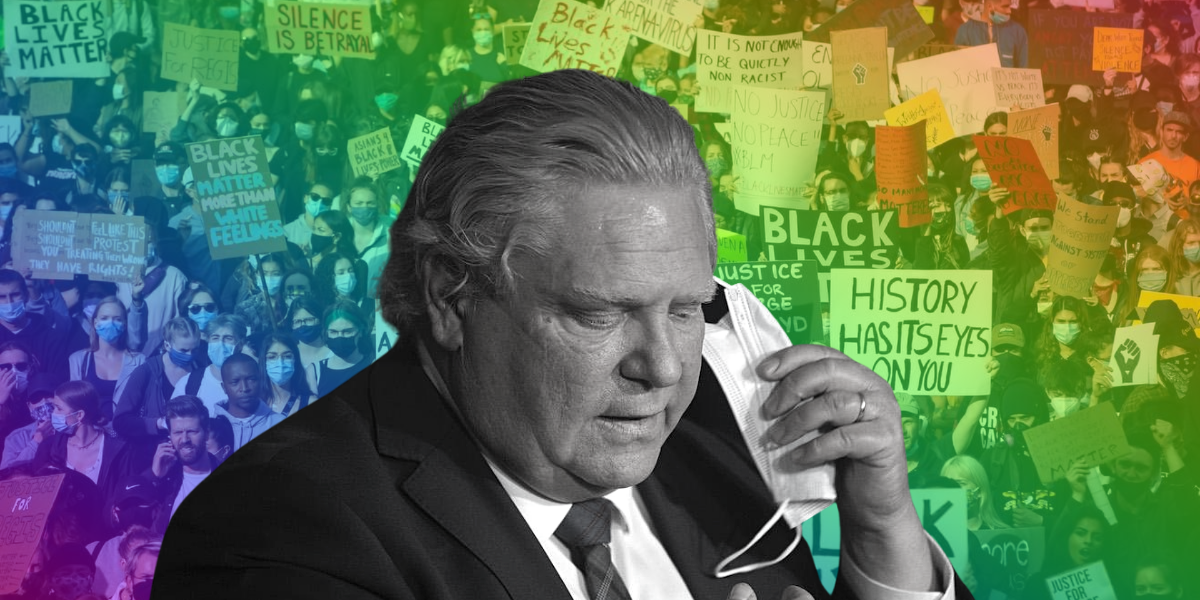 Twenty-four hours after the premier announced a massive expansion of police powers to stop individuals without cause, Doug Ford was forced to back down. This was uncharacteristic for an obstinate Ford government that refuses to implement paid sick days even as infection rates skyrocket during the third wave.

The Tories are embroiled in an internal crisis. A large faction of Tories hate the lockdown and want to reopen businesses at any cost. But they were not the ones who forced the party to reverse course. Police forces across the province refused to implement their new powers, but they are not to be commended either.

Let’s be clear. The pressure didn’t come spontaneously from above, from a benevolent police force. The push back sprang from below, after years of movements fighting for racial and economic justice.

The police are not our allies

Yes, some police services came out against enforcing this. But the police’s refusal to activate the official powers announced by Ford has little to do with their conscience or commitment to civil liberties. The police made a strategic decision not to enforce Ford’s new powers.

There should be no doubt that when push came to shove the police would enforce the draconian rules, their public stance was nothing but a PR move for them. For a variety of reasons they prefer to enforce the power to stop anyone without it being codified, and fear being the target of even more public ire. But make no mistake: we are not on the same side. The police are not independent actors engaged in principled refusal. The police are state actors that execute the state’s monopoly of violence against the working class, the oppressed, and the poor.

But the police are staring down a crisis of legitimacy brought about by years of organising against racist practices like carding and the use of lethal force against BIPOC people. The insurrections against the police murders of George Floyd and Breanna Taylor in the US, along with Regis Korchinski-Paquet in Toronto, precipitated the call for defunding and abolishing the police entering the political mainstream for the first time in decades.

Our work on the streets backed by public outrage against the increase in police powers, even while Ford denies paid sick days, pushed the government into a corner. Racialized communities–the communities hit hardest by COVID-19–rejected the new police powers just as they have always rejected attempts to increase the power of carceral institutions. After all, the unprecedented crisis of the pandemic shows us an all-too-familiar reality. Black and brown people–the same communities the government deems essential– are made to die by racist state policies like racialized policing and the denial of real safety through measures like paid sick days.

The gulf between the public health crisis and the injustice and inadequacy of the government’s response was apparent to all. More policing and shutting down playgrounds while keeping factories open made no sense to people.

The popular demand for legislating paid sick days for all would disproportionately benefit low-wage and racialized workers who have historically been denied and are most affected by the pandemic. The campaign for paid sick days was built over years and has slowly shifted the needle of public opinion on the issue. Now all opposition parties are calling for it, in addition to public health experts, mayors, the media and unions. This demand has majority support amongst voters of all parties, including the Tories. But Ford has stubbornly refused, even in the midst of a health crisis.

It was just a week ago that the government was saying schools are safe. There is no trust in this government. This lockdown is seen as the product not of the virus, but of the choices made by Ford. This is the time to keep up the pressure and drive a huge wedge into the Tory caucus and the ruling class.

This week the legislature is set to debate Bill 247, which would legislate 10 paid sick days. There are now rumblings that Ford is going to shut down the legislature, which would end the debate and vote on the upcoming paid sick days bill. This is a government in crisis. We need to maximize the pressure on the government to pass this legislation now, which would address the health crisis by empowering low-wage racialized workers rather than policing them.

We are closer to victory than ever before, and the police know it. Keenga Yamattha-Taylor writes, “Politics, history, strategy, and tactics are all that our side has.” The moment we find ourselves compels us to radically reimagine a different world. For an ethic of abolition is not just what we are against, it compels us to ask what we are for. We need real safety measures like paid sick days not cops, workplace justice not prisons. The crisis of the Ford government is a product of these longstanding movements, and moving beyond this crisis requires taking these movements to victory.