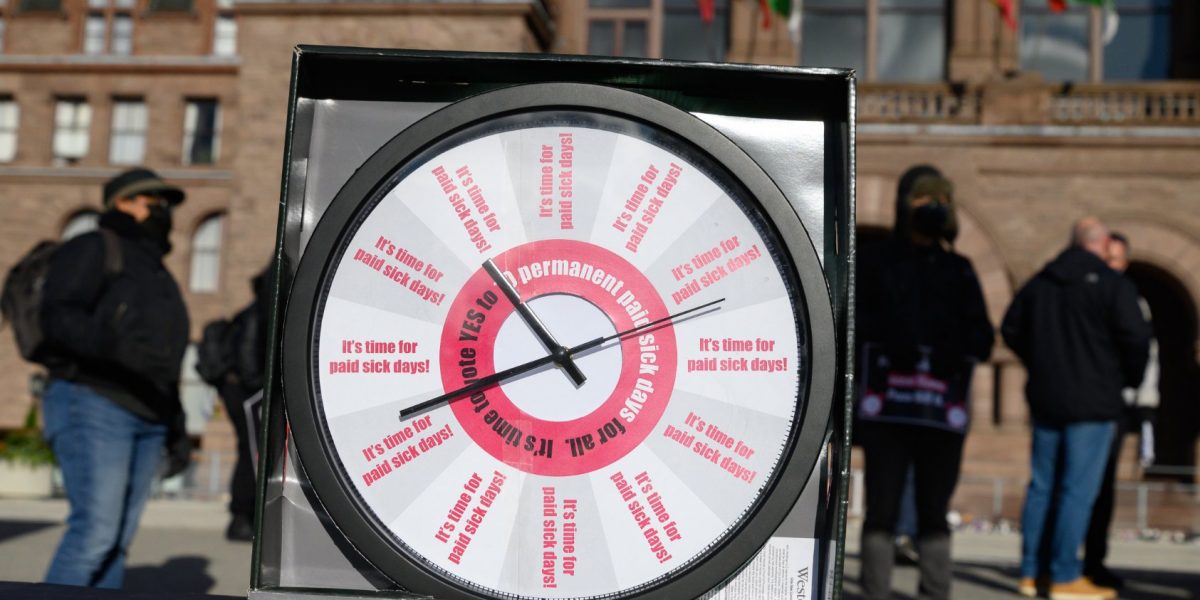 With just over six months until the provincial election, the Conservatives in Ontario have gone on a charm offensive claiming to be “working for workers.” But Bill 8 was the real test: would Ford vote for or against 10 permanent and paid sick days, plus 14 during a pandemic? This worker-led demand is the key lesson of the pandemic, and there is majority support for paid sick days across voters from all parties.

This support forced Ford to promise the “best paid sick days in North America”, and to deliver 3 temporary paid sick days–partially reversing his cuts to paid sick days before the pandemic. But these paid sick days will expire at the the end of the year, and are government subsidized–rewarding companies whose denial of paid sick days has fuelled the pandemic and disproportionately affected low-income and racialized workers. Ford has been forced to portray himself as a friend of workers in the lead up to the election, but his opposition to Bill 8 shows his true colours: by voting against paid sick days Ford has effectively voted for COVID, voted to continue workplace transmission, voted to perpetuate the vast inequity in infection rates and vaccine access, voted to undermine pandemic recovery.

The movement has forced the Tories into rhetorically supporting workers while continuing to oppose workers demands. Minutes after the vote, Ontario Labour Minister Monte McNaughton claimed that “we have the backs of Ontario workers.” But the Tories have stabbed the backs of Ontario workers: they cut paid sick days before the pandemic, and opposition to permanent paid sick days while temporary paid sick days expire amounts to a second time the government is cutting paid sick days. As infectious disease specialist Abdu Sharkawy responded, “the Ontario government is sending a clear message to all essential workers. Your work is essential. Your lives are not. If not a pandemic, what will it take?”

BC: partial victory for workers, despite NDP

Meanwhile workers in BC have won 5 permanent and employer-paid sick days. This will save lives, and improve equity. But while the BC NDP is congratulating itself on delivering more paid sick days than any other province, this partial victory is due entirely to the movement for paid sick days–which the provincial government has been holding back.

For most of the pandemic the BC NDP refused to provide paid sick days, focusing exclusively on the Canada Recovery Sickness Benefit (CRSB), which was a retroactive federal income support that workers had to apply for after they missed half a week of work. This was the same justification other governments across the country used, including Doug Ford when he argued opposition to the Ontario NDP’s legislation for paid sick days. Then the movement for paid sick days pushed both governments to deliver temporary paid sick days in the last few months. But rather than simply legislating 10 days as the movement and public health evidence have called for, the BC NDP arbitrarily framed it as a choice between 3, 5 and 10 days–which plays into employer claims that 10 days is excessive. Despite this attempt, 86% of people across BC support 10 employer-paid sick days, and yet the NDP government only delivered 5.

The NDP are the only mainstream party tied with the labour movement, and both unions and working class activists have been putting their hopes in the NDP providing an alternative to the corporate Liberals. But the NDP tries to “govern responsibly”, by mediating between the demands of workers and bosses. Like any other party under this system, they appease the rich and the big business lobby. The result has been to side with bosses against 10 paid sick days. This positions the BC NDP to the right of the federal Liberals who have promised 10–which undermines the federal NDP’s attempts to portray themselves as a progressive alternative to the Liberals–and to the right of the Ontario Liberals and NDP parties from Saskatchewan to Ontario.

If the government is serious about supporting these 5 days, they must challenge the big business myths and enforce the paid sick days mandate. When New York City legislated paid sick days years ago, there was no evidence of workers abusing them and broad support from small businesses. But a significant minority of employers continued to deny paid sick days, in violation of the law and disproportionately targeting workers in precarious jobs. As the study found, “13 percent of them failed to do so, and 42 percent of the employers we surveyed offered paid sick days only to some categories of workers. Although the law covers part-time and temporary or per-diem workers, over two-fifths of the employers denied paid sick time to these groups.”

So the NDP needs to enforce these new paid sick days, and make them immediately accessible for all workers without exception and without waiting periods. As the BC Federation of Labour highlighted, “how does it make sense that a worker is forced to go to work sick if they are ill during the first three months on the job? We’re also concerned that workers in the gig economy, who are too often misclassified by the employer as contractors, will continue to be left out.”

But 5 permanent and employer-paid sick days is a partial victory for the movement, and there are still 86% of people across BC who support 10. If the NDP can legislate 5 days they can legislate 10, and neither the need nor the demand is going away. As the BC Federation of Labour responded,

“This is an important achievement for public health and safer workplaces. But we’re disappointed that it’s only half the 10-day standard that science supports and that is the overwhelming preference of British Columbians….While we’re disappointed, we’ll continue to fight for the full 10 days of leave. The public health and economic case is clear. Despite some business lobbyists’ fire claims about costs to employers, study after study–and practical experience around the world–show the opposite: paid sick leave is good for the economy.”

Our demand still stands: 10 permanent and employer-paid sick days for all

The Ontario Conservatives yet again voted down paid sick days, and the BC NDP only delivered 5. But the movement will not allow a wrench to be thrown into the works and our fight for 10 continues–in BC, Ontario and across Canada. This is why the movement on the ground is crucial. The will of the workers across Canada has nothing at all to do with political parties except that they should be driven by our demands, not the other way around. Our demand for 10 still stands!