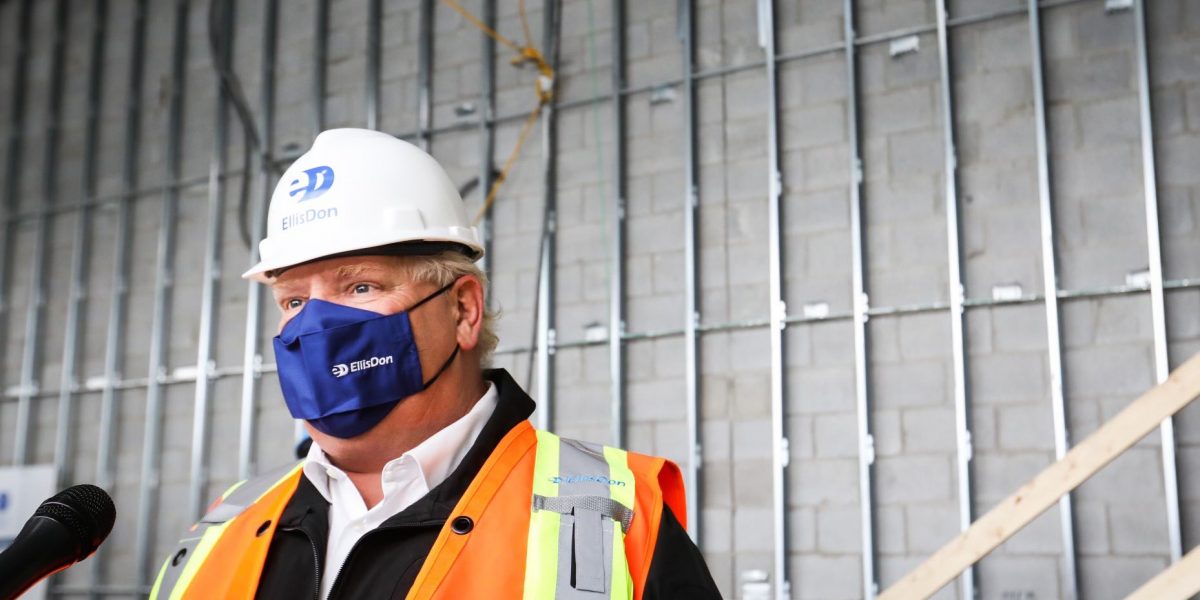 Over the last several months Doug Ford’s Conseravtive government in Ontario has been busy trying to give itself a makeover. Ontarians were treated to a flurry of government announcements this fall about temp workers, gig workers, injured workers and the minimum wage.

Ford and his labour minister Monte McNaughton have been extremely keen to be seen as a friend to Ontario’s workers. Ford won the last provincial election by claiming to support “the little guy,” but his government has at every turn legislated a very pro-business agenda. Now Ford and the Conservatives want Ontarians to believe they have gone from making Ontario open for business to working for workers.

Bill 27 was designed to create a number of splashy headlines that would paint the Tories in a positive light when it came to workers’ rights: the bill proposes a number of changes that will impact temp workers, gig workers, migrant workers, and injured workers. But the reality is that what is on offer is inadequate at best. Beyond the headline grabbing announcements, the details of Bill 27, Working for Workers Act, 2021, show that the Ford Conservatives are still very committed to putting the interests of big business ahead of workers.

One of the bigger promises made in the bill is to require the licensing of recruiters and the licensing of temporary help agencies. Requiring recruiters to be licensed and employers of migrant workers to use licensed recruiters is a positive step, as many migrant workers are exploited by recruitment agencies. Such requirements used to exist in the province. But to ensure that licensing is actually effective at actually increasing compliance with Ontario’s Employment Standards Act, there must be effective enforcement — meaning fines for non-compliance must be increased and there must be a heft security for those seeking a license.

Bill 27 provides no joint and several liability for employers when it comes to compliance for the use of unlicensed recruiters. There is no mandatory security deposit in order to obtain a recruiter license. Bill 27 does not require a registry of employers that hire workers with temporary work permits, which would help reduce the demand for unlicensed recruiters and make enforcement easier.

As with recruitment agencies, there must be a way for workers to make anonymous complaints about violations. Most importantly, temp workers need to have proper access to health and safety protections and must have equal pay for work of equal value. Our employment standards should aim to discourage permatemping.

The headline-grabbing announcements featured in Bill 27 are the washroom access for delivery workers and the right to disconnect from work. For gig workers, access to the bathroom is important but this piece of the legislation does not even begin to address the problems facing gig workers.

First of all, the washroom access section of the bill has a number of loopholes making it ineffectual at best. Secondly, the Conservatives seem quite content to permit the systemic misclassification of gig workers. Gig workers do not have access to the minimum wage, paid sick days, rights to form a union or a host of other benefits and protections. As Gig Workers United notes, a worker is a worker and gig workers need full employment rights.

The disconnecting from work portion of this bill has been promoted by Monte McNaughton as a way to redress the reality under the pandemic that “the lines between family time and work time have been blurred.” But the bill does no such thing. It only requires companies with over 25 employees to create a policy about not engaging in work-related communications. But the bill is vague and has no real enforcement. It is nothing but window dressing.

Bill 27 also empowers ​​the Ministry of Agriculture, Food and Rural Affairs to collect personal information of migrant agricultural workers. These new powers are excessive and intrusive for migrant workers.

One of the most glaring and egregious parts of Bill 27 is the naked attack on injured workers. Bill 27 will allow the Workplace Safety and Insurance Board (WSIB) to distribute surplus funds to the province’s businesses once the insurance fund’s sufficiency ratio reaches 115 per cent. The fund assets total over $6 billion and each percentage point represents $305 million in surplus funds. The current sufficiency ratio of the fund stands at 119 per cent.

This distribution scheme is a massive gift to business at the expense of workers. The fund should be used to help injured workers, not transfer wealth to business. After years of scaremongering about an unfunded liability within the fund, the WSIB, through attacks on injured workers and denying claims, announced that the unfunded liability had been solved in 2018. The newly elected Tories and the WSIB announced a massive 30 per cent cut to employer premiums that year and, since then, have cut employer premiums by half. Meanwhile, injured workers struggle to be properly and humanely compensated.

Bill 27 is about transferring money from workers into employers’ pockets. Surplus money in the fund should go to injured workers who have been unjustly denied funds. In addition to Bill 27, the province also announced a further five per cent cut to employer premiums.

With June 2022’s provincial election just around the corner, Doug Ford and Ontario’s Conservatives are looking to soften their image and rebrand themselves as a friend to workers. Bill 27 is designed precisely to have all the appearances of taking action on pressing issues facing workers without actually delivering any meaningful change. Any serious attempt to address the issues facing workers would follow the recommendations made by Migrant Workers’ Alliance for Change, Workers’ Action Centre and Parkdale Community Legal Services.

Ford’s attack on education workers, cuts to legal aid and other public services, as well as his viscous attack on labour standards in Bill 47 and his attack on public sector workers in Bill 124 will not soon be forgotten. If Ford cares about workers’ lives then he can start by passing Bill 8 to legislate 10 paid sick days.

It would be foolish, however, to dismiss Ford’s pro-worker turn as an impossible ruse or nothing more than a cynical move. Doug Ford’s Conservatives certainly are not fit to govern, but they are a formidable electoral force who have proven to have a keen political sense. Like Ford’s partial raising of the minimum wage, it is a credit to the movement for decent work — movements led by temp workers, gig workers, migrant workers and injured workers — that Doug Ford has had to rebrand himself in order to stand a chance of re-election.

These movements have put workers’ rights on the agenda and forced the Tories to grapple with how to address the new terrain. Ford’s makeover is an attempt to reflect the demands for workers rights without actually implementing them. With this strategy, the Conservatives could very well pull off their pro-worker turn and win the next election. Our best bet is not simply to call Doug Ford a liar, but to build a larger workers’ movement that is fighting for the changes that workers actually need.