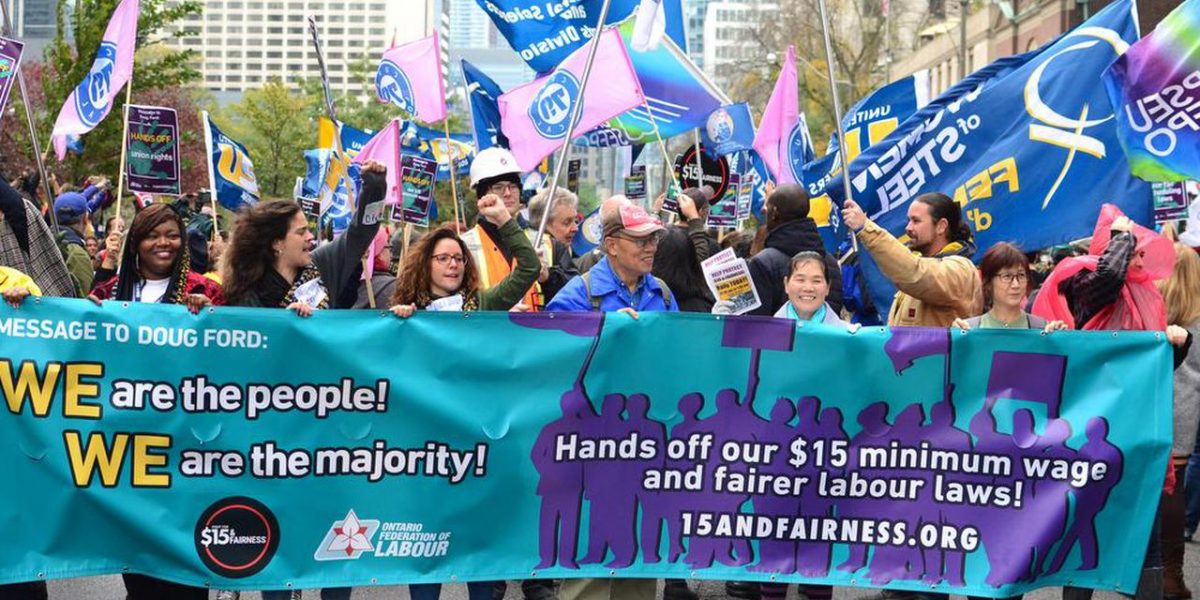 Doug Ford has resisted workers’ calls to raise the minimum wage to $15 an hour for years. The business lobby is not clamouring for a higher wage floor. But yesterday Doug Ford announced his Conservative government was going to bring in a $15 minimum wage on January 1, 2022.

Martin Luther King once described power as the ability to achieve purpose — the strength required to bring about social, political, and economic change. He was fond of paraphrasing the labour leader Walter Reuther in noting that power was making corporations and politicians say “yes”, when they wanted to say “no”.

Ford has been a stern “no” when it comes to raising workers’ wages. Yesterday, despite years of ideological opposition, he said “yes”.

Ontario’s current minimum wage will be increased from $14.35 to $15. The result of this will be that over 500,000 workers will get a raise, transferring money from employers’ pockets to workers’ pockets.

This is undoubtedly a good thing for three reasons. The first, and most obvious, is the wage increase means that minimum wage workers will have more money. On January 1, the minimum wage will increase by 4.53%. And the minimum wage for liquor servers will be levelled up from $12.55 to $15 an hour, a 20% increase.

The second is that raising the wage floor is not just beneficial for minimum wage workers, but also has a positive knock-on effect for all workers. When we strengthen employment standards it creates better conditions for unionized workers to bargain for more.

The third is that squeezing out any reform from this Conservative government is worth celebrating. Many viewed the idea of winning any type of reform while the Conservatives held a majority was a fool’s errand — that the only strategy we should focus on should be waiting until the election. Persistent organizing around labour standards has won some small but notable reforms even under this Tory government. From temporary paid sick days to this minimum wage increase, it shows that organizing can shape how governments of all stripes respond to crises.

Ford and opposition to minimum wage

Ford attacked the minimum wage increase as a job killer, arguing that it was harming the economy. Lies and myths were spread by Ford and much of the media about the impact of raising the minimum wage to $14 in 2018, some of which Ford has continued to repeat. But the data is clear: in 2018 Ontario posted a record low unemployment rate of 5.4%, beating the national average, and increased jobs by over 77,000.

A study done in 2017 by the Canadian Centre for Economic Analysis (commissioned by the Ontario Chamber of Commerce) claimed that 185,000 jobs would be lost over two years after bringing in Bill 148. A 2017 TD Bank study predicted that Bill 148 would result in 80,000 to 90,000 jobs lost. Even Ontario’s Financial Accountability Office predicted 50,000 jobs would be lost due to Bill 148.

None of this happened. These predictions were based on flawed economic models that have been thoroughly debunked by this year’s Nobel prize economic winners David Card, Joshua D. Angrist and Guido W. Imbens. Card, Angrist and Imbens showed that natural experiments in policy were far superior to outdated economic models. Amongst their most prominent findings was that there was “no indication” that the rise in the minimum wage cost jobs.

From LIFT to Tories new strategy

According to the government’s Financial Accountability Office, the LIFT credit eliminating Ontario personal income taxes impacted only 1 million Ontarians, but only a small sliver, 19,000, would have seen the full credit. In total, about 400 million would be transferred to low-income Ontarians. But raising the minimum wage from $14 to $15 in 2019 would have impacted 1.3 million individuals who would have received a total net after-tax benefit of $1.1 billion. On average, workers receiving the minimum wage increase would have received a net after-tax benefit of $810, as compared to the LIFT credit which saw eligible recipients receive on average $409 in 2019.

The LIFT credit left workers further behind and was never a substitute for raising wages.

From open for business to friend of labour

Ford’s attack on workers was immediate and sweeping in the wake of his election. His record has been a disaster for workers. Through Bill 124 he legislated wage suppression for public sector workers, who now face below inflation wage increases. He not only cancelled the minimum wage increase, stripped workers of legislated paid sick days, ended equal pay for equal workers, he also made it harder for temp agency workers to organize and has refused to bring in joint and several liability to protect temp agency workers.

For temp agency workers who have been killed on the job or for workers who lived and died through the pandemic without access to paid sick days, Ford’s attack on workers’ rights, and subsequent inaction were deadly.

Now, Ford and his labour minister Monte McNaughton are on a blitz to paint the Ontario Conservatives as pro-worker. This fall they have rolled out announcements about bathroom rights for gig workers, after hours emails, temp agency protections and now the minimum wage. This comes on the heels of introducing temporary paid sick days in the spring, something the Ford government stridently resisted, until it was forced to act due to public pressure.

As the Ontario election approaches next June, the Tories have changed tact and are now keen to present themselves as friends to workers. With Ontario’s economy still facing worker shortages, supply chain issues and an uneven opening, Ford is looking to up his appeal to Ontario’s workers, even if it means publicly disappointing the big business lobby. The Tories see this strategy as a way to hold in key swing ridings in order to win reelection.

Raising the minimum wage is an undoubtedly cynical move by Ford. But make no mistake: this is the product of pressure and conditions, not some one sided machiavellian scheme by the Tories. Ford did draw the ire of the Canadian Federation of Independent Businesses and the Ontario Chamber of Commerce over the increase. But, raising the minimum wage is popular in the province. Improving the conditions of gig workers in the province is also popular. Paid sick days for all workers is popular. Reforms to protect temp agency workers are popular.

These are popular ideas because there are active campaigns working on these issues that have, for years, aimed to shift the needle on these issues. Sustained efforts by the Justice for Workers campaign, the Decent Work and Health Network, Gig Workers United, Migrant Workers Alliance for Change and the many unions supporting these issues have helped build the popular appeal of these reforms. Absent that effort, there is no chance Ford would ever highlight these issues or gesture at small reforms. After all, the previous Tory majorities in Ontario froze the minimum wage at $6.85 from 1995 to 2003.

Of course $15 is not enough. Workers in Ontario need at least a $20 minimum wage. Too many workers are struggling coming out of the pandemic, while the rich have only gotten richer.

This is why we can’t applaud Ford or cozy up to him. Labour leaders who are flanking Ford at press conferences are doing a disservice to the working class. The way we can win reforms from this, or any, government is not to have a seat at the table — it is to set the table. It is about creating the conditions that can set the agenda for workers. That means winning popular support for stronger employment standards through campaigns and building fighting unions.

You don’t force people who want to say “no” to say “yes” through honeysuckle words. You force them to say yes because saying no means being stung by a mass of bees.

The winning of a $15 minimum wage is the product of years of organizing. Since 2013, when the $14 Now campaign was launched, workers have won a 46% increase in the minimum wage. This shows how we can win reforms by campaigning, even under right wing governments. But we will need to redouble our organizing efforts to win the stronger employment standards and higher wages that Ontario workers desperately need in our post-pandemic world.