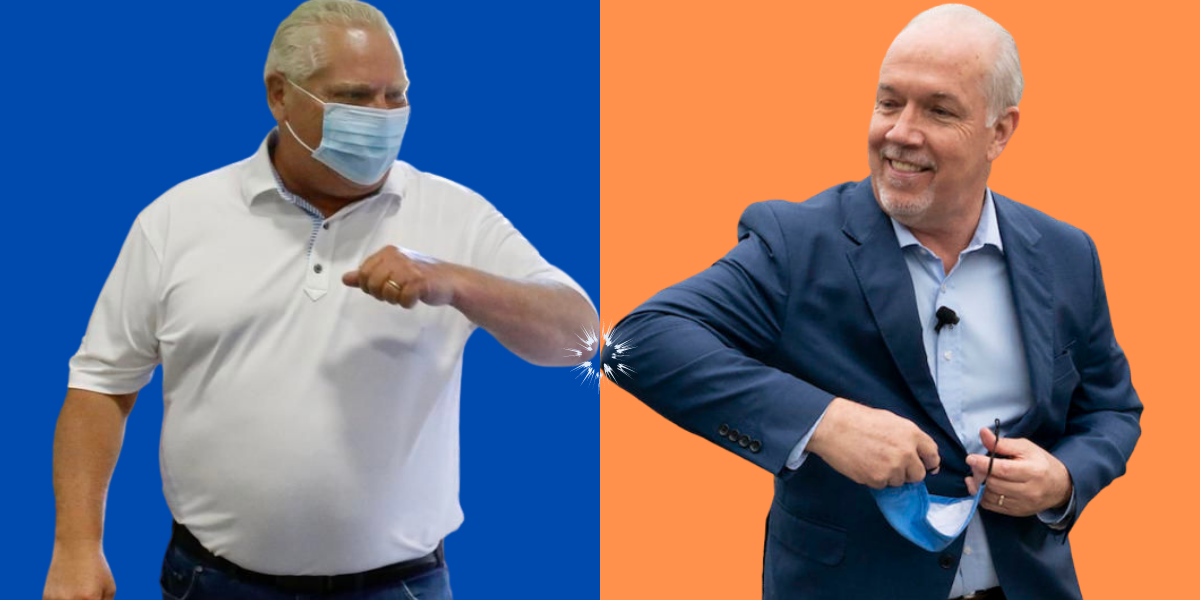 After three waves of COVID-19, rising calls for paid sick days across BC have finally pushed the provincial NDP government to act. On Tuesday, 14 months into the pandemic, John Horgan’s majority government tabled legislation that will bring in 3 temporary days of paid sick leave, which the public will reimburse employers for (up to $200 per day per worker) — essentially following the lead by Doug Ford in Ontario.

Presently, 58% of BC workers have no paid sick leave. And for workers earning less than $30,000 — who are disproportionately women and people of colour — that figure rises to 80%. These positions are generally held by custodial, foodservice, and retail workers, the same groups of people we have been calling “frontline heroes” for over a year. It’s clear that Horgan has failed workers — those who were crucial to his election as leader of the largest labour party in the province — during the pandemic.

Despite having a majority government that could easily legislate massive change — not just paid sick days, but also card check and minimum wage hikes — the BC NDP has failed to meaningfully distinguish itself from conservatives amidst a major public health crisis. Only now, well over a year into the pandemic, has a paid sick plan come into place. And it falls woefully short. Three days are far from what’s necessary for a 12-day quarantine, and reimbursing employers means workers are effectively subsidizing their own sick days. In addition this reform will end at the end of the year, taking away the few paid sick days that low wage and predominantly racialized workers have temporarily been provided.

In general, Horgan seems to agree with conservative leaders in power across the country and all their corporate backers that the COVID-19 pandemic is ready to wind down. Despite daily outbreaks and hotspot calls across the provinces, the push to be “open for business” is seemingly all that matters for the ruling class. They have trumpeted calls for personal accountability and pushed for increased policing and harsher fines to try and curb the spread of the virus, despite countless calls from healthcare professionals, scientists, and frontline workers for an adequate and universal paid sick days program.

According to the politics of electoralism, getting the right people or the right party elected is how we can win change. But the BC NDP’s long-vaunted parliamentary majority, something that could be used to transform society, is being wasted to maintain the status quo during a time when the status quo is costing workers’ their lives. It is the working class, after all, whom the NDP supposedly represents, and whom it depends on for legitimacy, support, fundraising, and campaigning.

Though the party has relegated labour to the position of junior partner within its overall infrastructure, union and worker donations still remain a central source of NDP funding. The party remains the largest political expression— if an undeniably inadequate one— of working class concerns and beliefs.

And yet it has failed to mount a bold alternative to conservative rule elsewhere, in many cases taking the lead from them. Horgan’s government is completely consistent with the long, poor record of social democracy in BC — unaltered even by a pandemic. As Alex Cosh rightly points out, the government’s behaviour “raises questions about its readiness to seize the moment and introduce ambitious measures required to address a range of other issues.”

It’s clear that refusing to legislate a solid and timely paid sick days plan for all workers only serves the interests of business, sacrificing the safety of workers and their families in the process. Horgan has, and continues to, put profit before people exactly as premiers elsewhere have done.

Sadly, other wings of the NDP have also failed at pressuring Horgan to chart another course. If the federal and other provincial wings of the NDP were serious about winning paid sick leave and other protections, they should have spent the last 14 months leveraging their clout and pressuring the BC government to act. Given that the party is one of the most integrated in Canada, there is ample potential in doing so.

Horgan’s failure to legislate a solid paid sick leave plan early on in the pandemic has also had a broader impact outside BC. In refusing to raise standards, the NDP in BC has failed the working class across the country— giving cover to Conservative governments who also continue to deny workers this basic protection.

Had Horgan created an adequate program (and done so a long time ago), the labour movement in every province would have been able to crank up the heat and pressure their governments to propose the same standards. Instead, Horgan collaborated with the federal government and federal NDP early on in the pandemic to implement the problematic Canada Recovery Sickness Benefit (CRSB) and claim it was a substitute for paid sick days, thus demobilizing the movement. Only now, long after the CRSB has been in place, is the government prepared to draft something that “fills the gaps” of the program.

The Ontario NDP drafted a bill that reflected public health evidence and movement demands: 7 permanent and employer-paid sick days, and plus 14 days during a pandemic. Horgan could easily have passed the same legislation for workers in BC, and in doing so helped the same demands for workers in Ontario. But by refusing to do so, he gave cover to the Ontario Conservatives to vote down the Ontario NDP’s bill. In fact, Doug Ford’s disastrous government in Ontario actually beat Horgan in introducing a provincial sick day program (one, of course, that is wholly inadequate).

And it seems now that Horgan would sooner follow the lead of the Ontario Conservatives than the Ontario NDP. The fact that Ford is now the one giving cover to Horgan is concerning on a number of levels.

But the experience of the BC NDP during this crisis shouldn’t lead us to simple pessimism. It should remind us that no matter who is in power, we have to remain organized and mobilized to fight for the protections we deserve. When we do that, we can win. It is no coincidence that the Ontario NDP’s bill reflected the movement for decent work that has been building for years, while the BC NDP has not faced the same pressure. Even the Ontario Liberals have been pushed to support 10 permanent and employer-paid sick days, showing the impact of the movement.

All around the country, workers have successfully organized to expose the problems with CRSB and, as a result, changed the conversation— and have even gotten governments to admit the program is flawed. This is a crucial switch, as the argument against paid sick days hinged on the idea that the CRSB worked. Now, premiers are being pushed into a corner, and the public is forcing them to respond to the growing demand for paid sick days that are adequate, employer paid, universal, and permanent. If we keep building this movement, that force can grow stronger and push all governments to pass legislation to support workers’ lives.

We know that when workers are given access to paid sick leave, COVID-19 rates fall off and communities are safer. More than increased policing, more than fines, we know that paid sick days not only save lives, but are one of the most important measures in putting the pandemic behind us. But we have to be specific about our aims. The “paid sick days” that Horgan has introduced are not adequate, employer-paid, universal and permanent.