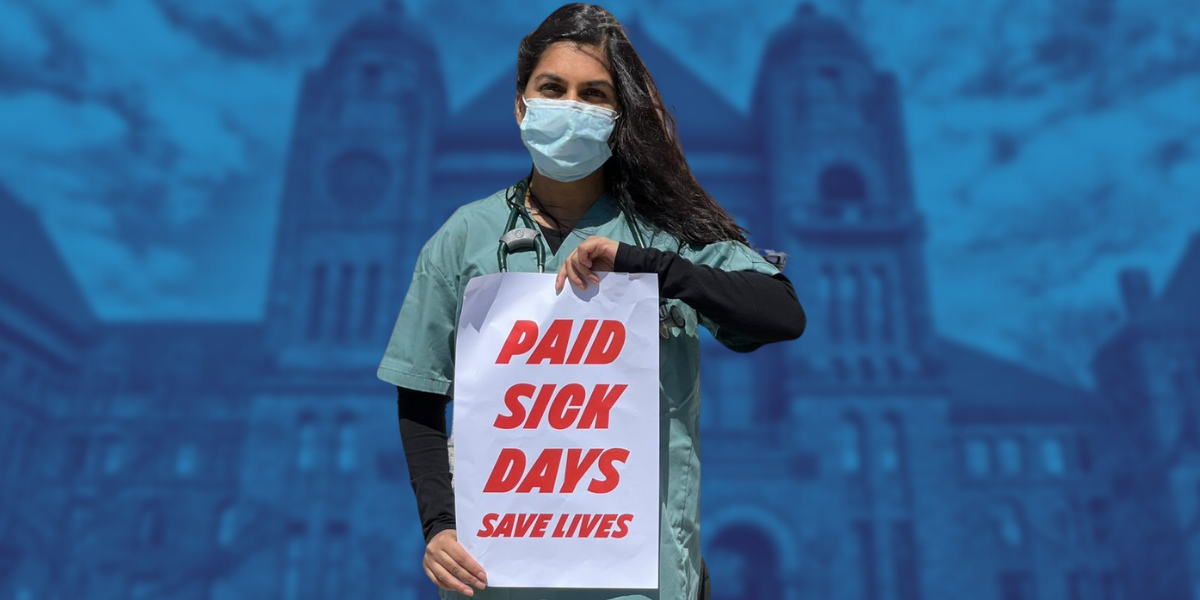 Doug Ford cut permanent and employer-paid sick days before COVID-19, then ignored and ridiculed them during the pandemic’s first year. In the second year of the pandemic, Ford continued to battle against the growing calls for paid sick days—from claiming they already exist, to constraining paid sick days to a limited and temporary government program.

This reflects and reinforces a catastrophic public health failure, but the shifts in government tactics also indicate the impact of the rising movement for paid sick days. As the saying goes, “first they ignore you, then they laugh at you, then they fight you, and then you win.” But Ford’s recent announcement is not a win: it is a temporary concession used to stave off permanent and employer-paid sick days. The movement has shifted the needle on paid sick days, but it has much further to go to win paid sick days for all.

First they ignore you

But the decent work movement, which had been organizing for paid sick days for years before the pandemic, escalated the calls for paid sick days through days of action across the country. This demand was echoed in October by Canada’s Chief Medical Officer of Health, Dr. Teresa Tam, who called paid sick days “essential for protecting worker and community health.”

Then they laugh at you

Ford could no longer ignore the issue, so he ridiculed it. After 285,000 infections and 6,700 deaths, Ford called the idea of paid sick days “unacceptable, it’s not prudent, it’s not fiscally prudent and it’s totally irresponsible for any government to do that.” The Conservatives also claimed that paid sick days were a silly NDP ploy, and ridiculed Bill 239 that would have legislated 7 permanent paid sick days plus 14 during the pandemic. Jane McKenna was the only Conservative MPP to speak during the debate on Bill 239, saying that legislating employer-paid sick days was “ridiculous” and “does not make sense in the middle of a global pandemic.” So Conservatives voted down what would have been one of the best paid sick day legislations in North America, on the eve of the third wave.

Then they fight you

Thanks to vaccines in long-term care homes, the mortality of the third wave was lessened. But a slow vaccine rollout in the community combined with the ongoing denial of paid sick days drove case numbers even higher, causing a crisis for the healthcare system. Facing a preventable humanitarian catastrophe, Ford was unable to ignore or ridicule paid sick days any longer. So he started to really fight against them.

The first tactic was to claim that workers already had paid sick days, thanks to Conservative lobbying. After the federal government extended the duration of the Canada Recovery Sickness Benefit (CRSB) from two to four weeks, Ontario Labour Minister Monte McNaughton announced, “there’s four weeks of paid sick days available to every single worker in the province of Ontario.” This was a bizarre claim and political gas-lighting from a government that cut two paid sick days before the pandemic, and that dismissed paid sick days during a pandemic as “ridiculous”.

While CRSB is a helpful retroactive income support for those who qualify, it fails every criteria for paid sick days: 1) it is not universal, because it excludes migrant workers and those earning less than $5,000; 2) it is not fully paid, and instead amounts to a pay cut for 80% of recipients; 3) it is not adequate, because it can’t be used for a one day vaccine or two days to get tested and wait for results; 4) it is not accessible, because workers have to apply after missing half a week and then wait for funds; and 5) it is not permanent.

This tactic crumbled under the government’s hypocrisy, as the premier himself was able to immediately have fully paid and adequate sick days the moment he came in contact with someone with COVID-19. The call for paid sick days is now at a fever pitch, with 83% of people across Ontario agreeing that “governments should make all employers provide paid sick days for all employees”. According to the Science Table COVID-19 Advisory for Ontario, states in the US that introduced paid sick leave saw a 50% reduction in the number of COVID-19 cases per state per day.

So from a position of personal and political isolation, Ford abruptly shifted from insisting CRSB was the same as paid sick days to tearfully promising he would deliver ‘the best paid sick days plan in North America’. But this was yet another cynical political move. There are more than a dozen jurisdictions in North America with permanent and employer-paid sick days, and Ford had another chance to add Ontario to that list by supporting Bill 247, which would have mandated 10 permanent, employer-paid sick days.  Instead, after 445,000 COVID cases and 8,000 deaths, the Conservatives voted against Bill 247 and then proposed a limited and temporary solution that incentivizes employers who deny paid sick days.

The “Ontario COVID-19 Worker Income Protection Benefit” provides three days of sick days for reasons related to COVID-19, and will expire along with CRSB in September. After claiming “there’s four weeks of paid sick days available to every single worker in the province of Ontario,” Labour Minister Monte McNaughton is now claiming that “all workers will soon have access to three paid sick days.”

The goal of the WIPB is to fill the gaps in the CRSB, which it partially does: whereas workers have to apply and wait for CRSB, WIPB is accessible through the Employment Standards Act; whereas CRSB couldn’t be used one or two days for a vaccine or test, WIPB can. But like the CRSB  the WIPB fails all the criteria for paid sick days: 1) not universal, because it excludes gig workers; 2) not fully paid, because it’s capped at $200/day; 3) not adequate, because it only lasts three days even those workers with COVID-19 need 10 days; 4) not fully accessible, because if workers need more than three days they have to turn to CRSB but are not allowed to access it the same week–and will lose wages going from one to the other; and 5) not permanent.

The demand for paid sick days has never been about trying to come up with a new temporary federal program, and then to partially cover up its holes with a new and temporary provincial program. The demand for paid sick days has been centered on permanently closing the gap between the 42% of workers who have employer-paid sick days and the 58% who don’t—who are disproportionately low-wage, women, disabled, racialized and migrant workers. Both CRSB and WIPB are designed to keep those equity gaps wide open, and for whose benefit?

Ford publicly squeezed out a tear for the human toll of COVID-19, and the Conservatives rushed this temporary and inadequate bill through the legislature in a matter of days. The speed at which they moved to pass WIPB shows they could have swiftly mandated permanent and adequate paid sick days from day one of the pandemic.

The WIPB bill is called the COVID-19 Putting Workers First Act., but Ford’s press release he issued after his tearful address revealed his real concern was to “not impose any additional burdens on the backs of Ontario businesses that have been ravaged by the COVID-19 pandemic.” This includes companies like Extendicare, Greenhill Produce, Loblaws, Amazon and Walmart—who have made a killing denying paid sick days to healthcare workers, migrant farm workers, grocery workers, factory workers and retail workers.

The WIPB is not a win for paid sick days, it is a tactic to fight against permanent and employer-paid sick days. But the fact that Ford has to offer this concession shows his previous tactics failed—from ignoring paid sick days in the first wave, to ridiculing them in the second, and then claiming they already exist in the third. These shifts are not simply a reaction to the scale and disproportionate impact of the pandemic, but due to the organizing and mobilizing of the decent work movement—which has won the vast majority of people across Ontario to support paid sick days—including 44% of Conservative voters.

On May 1 the decent work movement is re-launching, including the call for 10 permanent and employer-paid sick days plus 14 during health outbreaks. The days of the government ignoring and laughing at this movement are over. We are now in the midst of the fight. And we can win.

Join the May 1 Justice for Workers Rally